Jobless mum-of-seven who is pregnant with twins demands bigger council house – because she has uneven floors, no TV and lives near a road

Alana Burns, 38, who is due to give birth in March and lives with her children Alisha, aged two, Steven, aged four, Cayden, aged seven, Leigh, aged 15, and Caitlin, 16. Adult children Stewart, 20, and Bryan, 19, also stay with her in a flat above a pub in Bathgate, West Lothian.

A jobless mum-of-seven who is pregnant with twins has demanded a bigger council house – because she has uneven floors, no TV and lives near a road.

Alana Burns, 38, is due to give birth in March and lives with her children Alisha, aged two, Steven, aged four, Cayden, aged seven, Leigh, aged 15, and Caitlin, 16.

Adult children Stewart, 20, and Bryan, 19, also stay with her in a flat above a pub in Bathgate, West Lothian.

The flat has four bedrooms but the family are squeezing into three of them as a leak makes one bedroom uninhabitable.

But Ms Burns listed a catalogue of complaints and demanded to be rehoused – including uneven flooring, damaged ceilings, noisy neighbours and not receiving post.

The single mum said: “My relationship with some of my children is at breaking point. We can’t keep living like this.

“The council has been out to the leak and said they’d get in touch with me, I have heard nothing.

“This has been going on for weeks and it needs sorting out.

“It is not safe for anyone to be sleeping in that room so we’re now down to eight people sharing three bedrooms which is ridiculous. 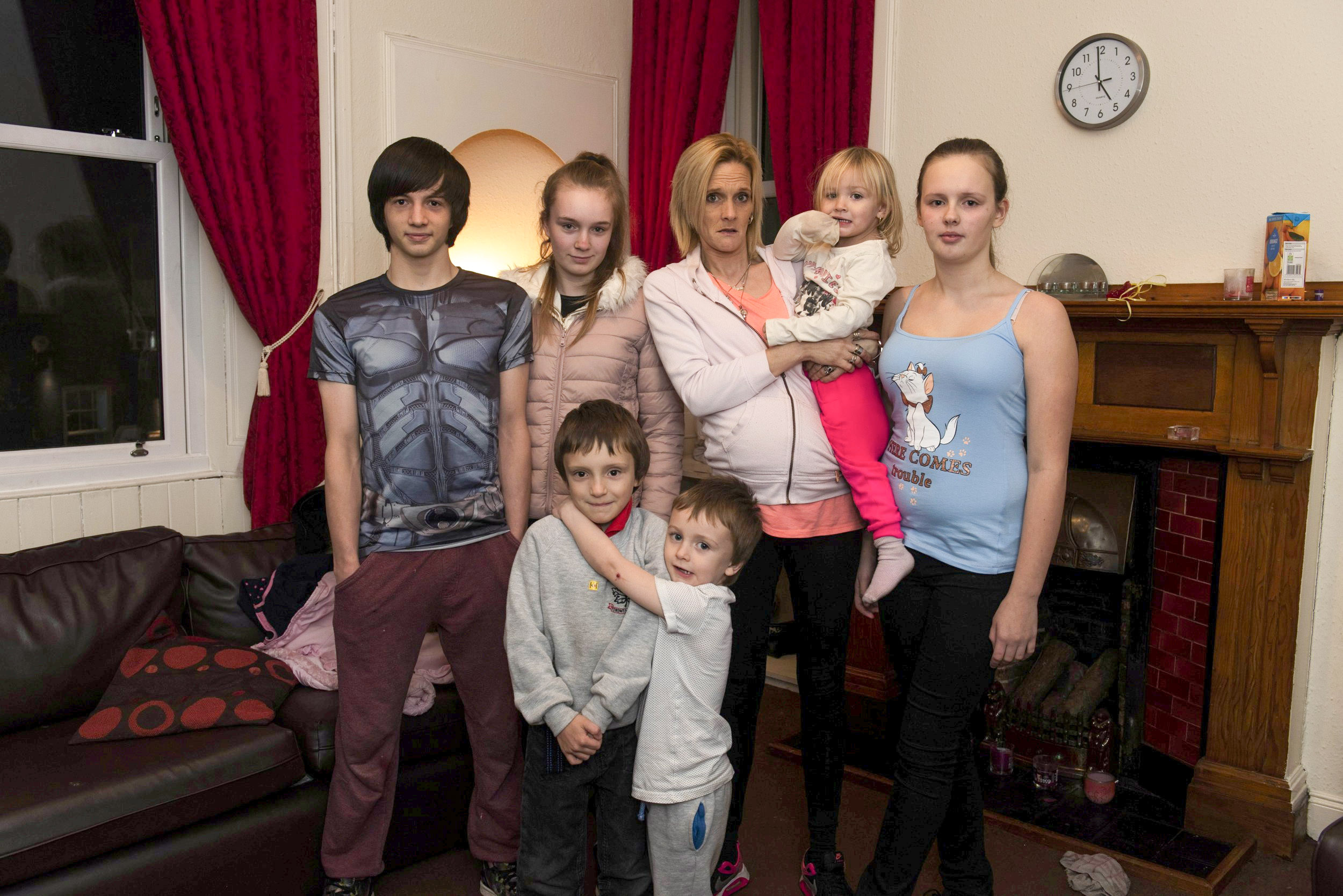 “I just want to get out of this hell. I’d rather live anywhere else, as long as it is not in here. It has been really tough.

“I’m feeling down every night and sometimes you just feel like giving up. But I just have to keep going for the sake of the kids.”

Ms Burns complained that the flat does not have a television and her children cannot go out to play.

The family was living in a private let in Livingston until her landlord decided to sell the property in August.

After spending a month in various hotels, West Lothian Council found them the flat in Bathgate and they moved in on September 20.

Ms Burns is having to pay out £30 a day on electricity and claims a third party is using her supply.

She added: “We all have to wake up at 6.30am and a taxi picks the kids up at 7.30am to take them to school in Livingston.

“I need a proper house where I can bring up my children. The whole situation is unbelievable.

“My kids can’t go out to play here. The road in front is busy and there is a car park at the back of the property so it isn’t safe.

“All the kids are stuck inside all night crammed in without any TV.

“There is no way we’re using anywhere near that level of electricity. We wouldn’t be here if we had a choice but we need to now get out as soon as possible.” 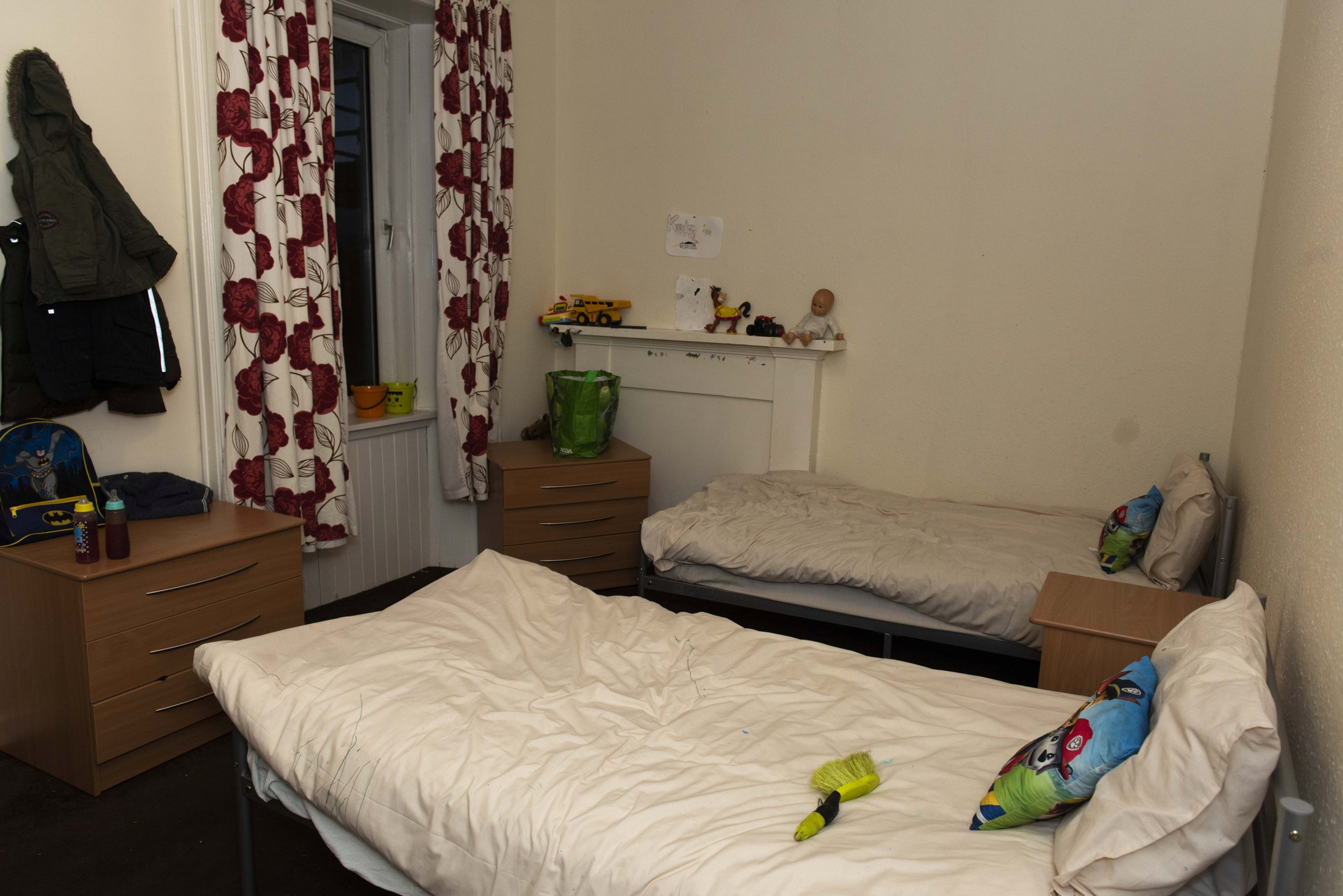 A West Lothian Council spokesman said: “It can be challenging to find suitable accommodation for large families who present themselves as homeless, given the limited stock of larger homes available.

“In this case, the council arranged for temporary accommodation from a private landlord to try and meet their housing needs until a permanent home could be found.

“Previous repairs notified by Ms Burns have been fixed by the landlord.

“The leak was only notified to us on November 12, with a repair to be arranged soon.

“We would encourage Ms Burns to engage with the offers of support already made, to allow us to help find a solution for her family’s housing needs.

“This includes widening her choice of areas to maximise her opportunities for permanent housing.”