Is this the craziest Christmas office desk you’ve ever seen?

by Charlotte Owen
in News
0

Jack Makepeace, 24 who has constructed a Christmas castle around his desk.

A Christmas-mad office worker has turned his desk into Britain’s most festive workspace – transforming into a snow-covered castle complete with ‘smoking’ chimney.

For the third year running, engineer Jack Makepeace has created a merry masterpiece of his workspace so he can celebrate Christmas while on the job.

What started as a competition amongst colleagues at building services firm Ibsecad in Leeds, West Yorks., has now become a tradition – with Jack’s workmates waiting in anticipation for his Christmassy creation.

This year the newly married Yuletide fan drew inspiration from his recent honeymoon to Sweden when he and new wife, student Charlotte, 23, visited the Ice Hotel.

The 24-year-old created a cardboard castle covered in snow with a working drawbridge and a tunnel for escaping smoke – if somebody vapes through it.

Jack sits inside his castle to do his work and sets his computer on log fire screensaver mode if he starts feeling the cold.

It is especially brave – as Jack’s desk is located next to the boss.

Jack said: “It took me about five hours to make. I have a degree in engineering so, luckily, the drawbridge didn’t pose too many problems to construct.

“I then went into the office on Sunday to staple the whole thing together. I promise it was all done in my own time.”

Jack has always loved Christmas, but especially so because his blind wife loves all the sparkles.

Jack said: “Charlotte has a genetic disorder called retinitis pigmentosa which meant she lost her sight at 14-years-old.

“She only has a little light perception left so she can see all the sparkles, on the tinsel and from the lights, so it is a very special time for us.” 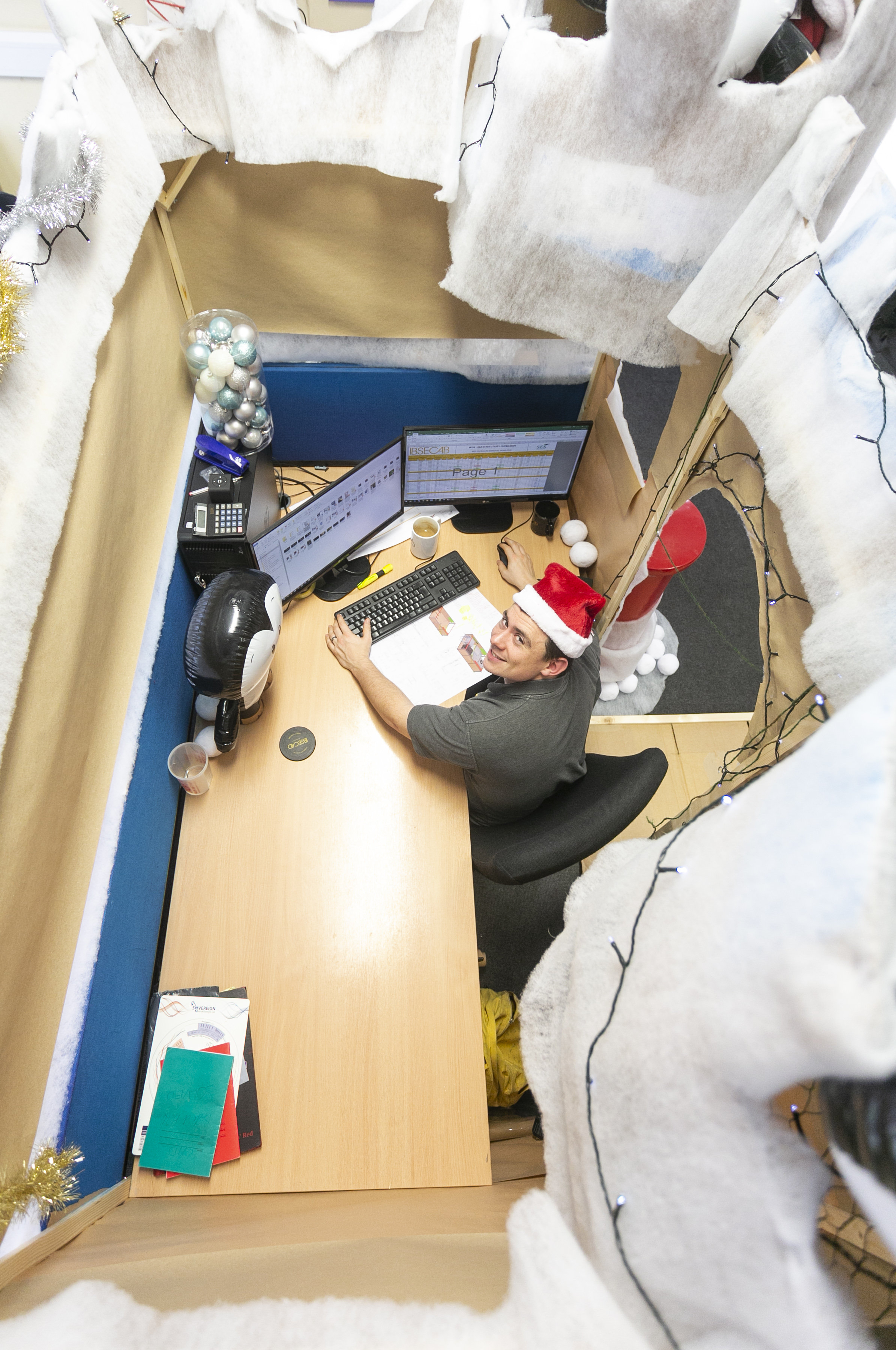 The couple, who have been together five years, live together in Morley, West Yorks., with their guide dog, Moss.

Jack said: “I had only worked here a couple of months when the company first set a competition in 2016.

“Others had put Christmas trees on their desk and I decided I wanted to go ‘out there’ and build a festive house around me.

“I wasn’t quite sure whether it was the right thing to do, with me only working here a short while, but I thought ‘sod it, it can only make people smile’.

“It went down such a storm that my colleagues said I had to make a bigger house next year – which I did – this year I thought I better build a castle.”

Officer manager of Ibsecad, David Coy, said Jack “knocked it out of the park” in the first ‘decorate your desk’ contest. 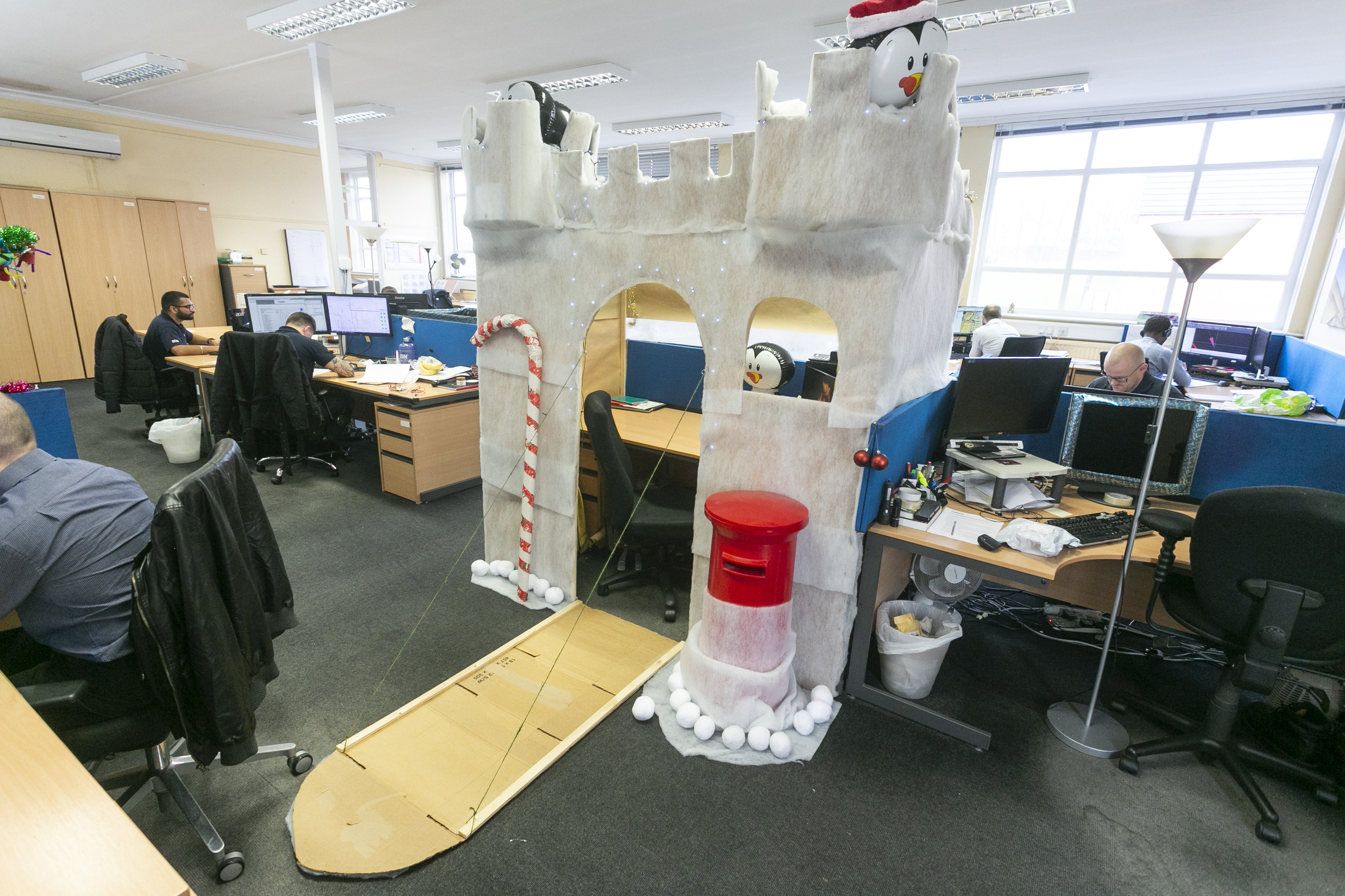 David, who has worked at the firm for six years, said: “I set up the competition in 2016 to create a bit of festive cheer in the office.

“The rest of us used a bit on tinsel and a tree, then Jack created a masterpiece that was absolutely incredible – he deserved the prize of a bottle of JD.

“Last year it got bigger and this year I came in on Monday to an ice castle. Already we’re excited to see what he’ll do in 2019.

“We were slightly worried about what he could be getting up to in his boxed-in castle but he does sit next to the regional director, Antony Henson, and he has put a window in there so we can have a peek in.”