Douglas Chambers' drawings which have been discovered by his family in Somerset.

Incredible sketches from the battlefields of WW1 drawn by a young soldier who never spoke of his time in the trenches have been found by his family – 100 YEARS later.

The intricate drawings and caricatures were by Douglas Arthur Chambers who was just 20-years-old when he went off to fight in the Great War.

Douglas never spoke of his time in the war, or his drawings, but his sketch books were recently discovered by his granddaughter Sue Doyle, 62.

Douglas died in 1975 at the age of 80 and his estate was left to his daughter, who in turn left it to her daughter Sue.

Sue, a nurse who lives in Taunton, Somerset, with husband, Christopher, 63, said: “I knew nothing at all about his service before finding these sketch books, he didn’t talk about it.

“He was a very quiet gentleman and kept himself to himself. He was lovely company but didn’t talk about his war experiences at all.

“I’m not surprised he didn’t talk about them because he was obviously compartmentalising his experiences.

“He was in the Royal Army Medical Core. It must have been a traumatic experience. One of the captions was ‘I want to go home’.”

The highly professional, funny and satirical sketches cover a range of army scenes, from shouting drill instructors to malfunctioning showers.

One features a medic digging a hole with the caption “Join the R.A.M.A, to ‘tend the wounded'”.

Another includes a soldier marching through the snow with “happy and still smiling (I don’t think) written besides. 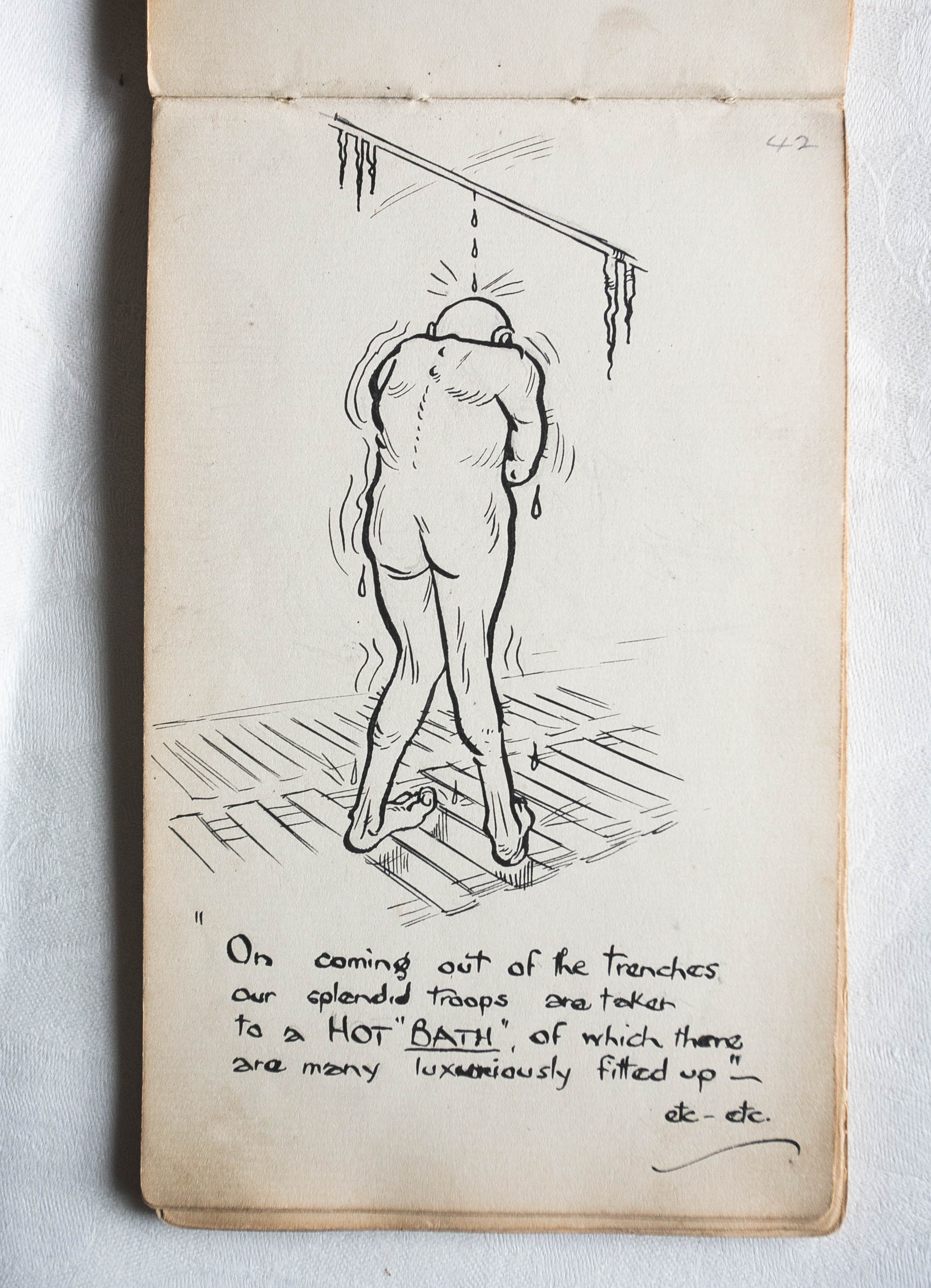 And another shows a soldier scrubbing a wooden floor above the question “what did you do in the great war, daddie?”

Sue continued: “The drawings depict the tasks they were required to do and the places they were staying, how they felt about things and how their superiors treated them.

“Some also show a bit about how they felt about what was going to happen to them.

“The second book starts as he is sent to war, I don’t know the exact date but some drawings are dated.

“I know he was on the Somme and there are two villages pictured in the sketchbooks, one is of a village called Voyennes, and the other village is called Bethonsart.

“When he goes to France the drawings change completely and they are all about the experiences where he is stationed.

“They depict the conditions they were living in, the experiences they have, what it was like when the bombs went off and there is one called ‘the first feeling of shell shock’.

“Some times there are several scenes on one page, some times they are sequences over several pages.

“The third in the sequence shows the same chap collapsed in a crater with a bomb coming towards his head, it was captioned ‘the last post’.”

Sue said finding the sketches was a moving experience, and she is proud of what her grandfather accomplished in the war.

Now, she intends to publish the sketches in a book so more people can enjoy Douglas’ artwork.

She added: “They are extremely poignant, the pictures, and some are shocking, but I’m extremely pleased to have found them.

“I’m proud of his artistic skill, he had a black humour which must have kept him going.

“I’m thrilled that people are having the opportunity now to see them because they are a different historical record.

“They were drawn contemporaneously, not afterwards – they were done while he was actually there.”