Karl Pollard and his daughter Stephanie.

A doting dad was branded a sex offender after hotel staff mistook his daughter for an underage girl he had groomed.

The pair checked into the budget hotel near her home in Macclesfield, Chester last week.

But when Karl went up to the room to freshen up, he was hounded by cops who accused him of grooming the young teen.

Karl said: “I couldn’t believe it.

“It was an emotional trip already – but it was made so much worse.

“One minute I was brushing my teeth, the next I was being told I was a paedophile.”

Karl and Stephanie had made the four hour train journey from their home in south Wales to visit his mother.

Karl said: “My mum has just been diagnosed with aggressive lung cancer.

“We’re not sure how long she has left.

“I wanted to take Stephanie down to visit her before she started treatment.”

Karl, a carer for his wife Kim, 45, who has multiple sclerosis, booked a double room COST for them both after being told it was the only room left.

He said: “When we arrived the receptionist gave me a weird look but I thought nothing of it.

“We went up to the room to get unpacked and ready to see my mum.

“It was only a 20 minute walk away – which is why I chose the hotel.

“About ten minutes later there was a knock at the door.

“A policewoman was standing there.

“I thought something had happened to my mum or my wife.

“But she said: ‘We’ve had a call from Travelodge, they believe you are a paedophile grooming underage girls’.”

Karl and Stephanie were interviewed separately by the officer.

He said: “I explained to her that I was Stephanie’s dad.

“The officer had to ask her loads of questions to prove it.”

He said: “My daughter was in tears.

“She was so scared – and thought I was going to get taken away.

“This has never happened to me before.”

He said that Travelodge had not apologised to him and not offered a refund for his stay.

“It was an already traumatic trip.

“I was treated disgustingly.

“The worst was my daughter, she was just so distraught,” Karl said. 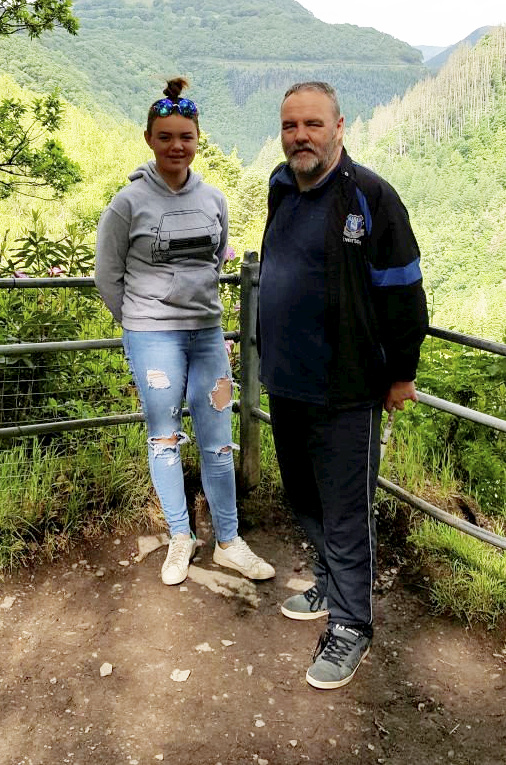 A spokesman has apologised and said a full refund has since been given.

They added: “All our hotel teams are trained according to national guidelines supported by the NSPCC. In the past proactive action by our hotel teams has helped to safeguard young people at risk. In this instance we got it wrong.”

Cheshire Police said: “Police were called at 3pm on Thursday 8 February to reports of suspicious activity at a hotel on Waters Green in Macclesfield.

“Staff at the Travelodge did the right thing by reporting what they believed to be suspicious activity to officers although thankfully there was nothing untoward and it turned out to be a misunderstanding.”

Last year Travelodge demanded dad Craig Darwell prove he was the father of 13-year-old Millie after staff accused him of being a paedophile.

Craig had checked into the hotel in Surrey after taking his daughter to Thorpe Park.