A horror crash victim who was on the brink of death says he woke up from a coma after his fiance’s love brought him “back to life”.

William Webster, 28, lost consciousness when he was in a severe car crash involving a bus during summer last year.

Medics feared he may not survive as he was rushed to hospital by helicopter for emergency treatment.

Doctors at the Queen Elizabeth University Hospital in Glasgow even told his family he would “not make it” and they hoped for a miracle.

William was then induced into a two-day coma as he had suffered multiple injuries including punctured lungs.

But during this devastating time, his devoted fiancé, Rebecca Doig, 29, stood by her man’s bedside each day in the Intensive Care Unit.

And when William came out of the coma he mistakenly asked nurses if he could speak to his “wife” — despite Rebecca just being his girlfriend at the time.

William said it was Rebecca’s dedication and love that helped him make a recovery — and made him pop the big question once he was stable.

The school learning assistant said: “I woke up in hospital and I did not know what had happened or why I was there.

“I was obviously in a coma and I was heavily on morphine.

“I could not respond because my mouth was wired shut, so I could only do hand gestures.

“The only thing that I had wanted to see was Rebecca when I opened my eyes.

“When I saw her, Rebecca gave me a reason to get better and if she wasn’t there then there would be no reason. I was doing it for her.

“It was her love that brought me back to life.

“I wouldn’t be doing this well if it wasn’t for her. Having someone to talk to who believes in you is special, to be honest.”

Rebecca struggled to face William at first because she did not want to see him in such a condition.

Rebecca said: “I couldn’t look at him. Seeing him like that was just the worst thing ever. It really did upset me, I had to keep a brave face for him.

“Doctors had said he may not be able to reply but there was still a chance he could still hear me.

“I kept holding his hand and speaking to him and at times he would reply using a hand gesture.”

William, from Dumbarton, West Dunbartonshire, was so overwhelmed by his fiance’s support to the point that he began to see a future with her.

He added: “One time when I was high on morphine, I asked the nurses if I could see my wife. They went to the waiting room and asked for my wife.

“Rebecca said ‘I’m his girlfriend, not his wife.’ She came in and I started calling her ‘wife’.

“We started talking about getting married when she was at my bedside when I couldn’t walk.

“I said when I come out I want to marry you and Rebecca said ‘you don’t have to’. But to be honest it was something I wanted to do.” 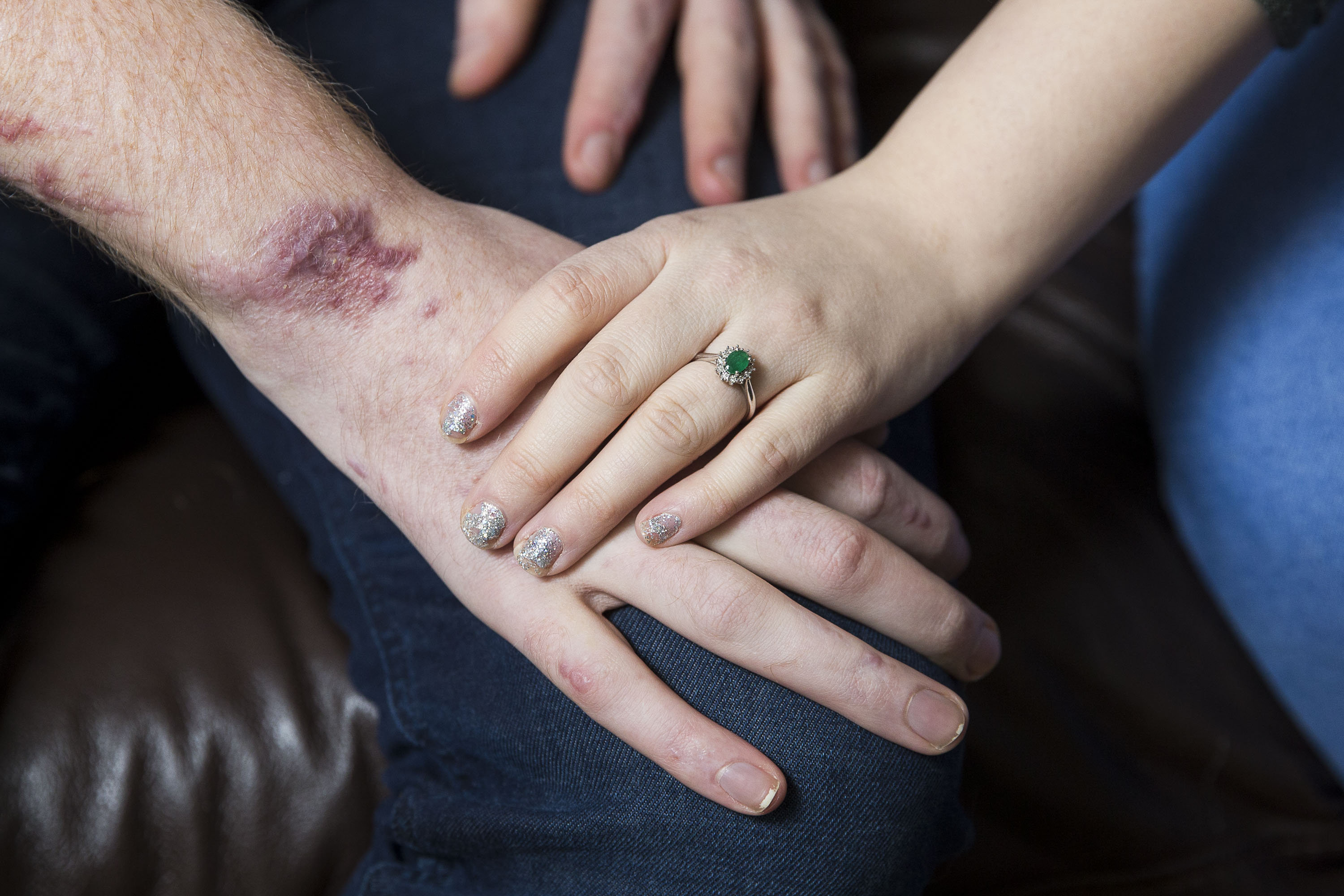 The couple originally met through the dating app, Tinder, in 2016 and have been inseparable ever since.

It was love at the first swipe for Rebecca but she came close to losing that after discovering his multiple injuries.

William fractured his jaw in three places, he also had dental injuries with missing teeth, multiple broken ribs and needed his scalp stitched back together.

In addition to this, he had collapsed lungs, a triple broken arm which doctors feared they may have to amputate.

And his shoulder and scaphoid were broken alongside a double fractured ankle, fractured tibia and patella.

She added: “Seeing how quickly things can be snatched from you made us realise that we wanted to move in and get married as soon as we could, and we have even got a wee kitten called Kendrick now.”

William was discharged from hospital in September and after making a remarkable recovery the couple went to pick an engagement ring.

He then decided to take out the emerald ring and pop the question on his birthday, 15 December.

He said: “At 6 o’clock in the morning when Rebecca was still in bed. I ordered flowers the day before. I hid them so she couldn’t see them.

“I gave her the flowers although she gave them back to me and said ‘this is my birthday so why does she have the flowers’.

“I then gave her this little card which said ‘there’s only one thing I want for my birthday and that’s for you to be my wife’.

“The fact that she said yes meant the world to me. We have even started talking about children and that now.”

As William has made a remarkable recovery he still aims to “give back” and raise awareness to the emergency services that helped him.

He particularly credit’s Scotland’s Charity Air Ambulance which helped him in the aftermath of the crash.

The service provides a critical life-saving help across Scotland.

William will be taking part in a 10K in August in an attempt to raise funds for the service.

He added: “If it wasn’t for them I wouldn’t be here. I am so grateful for what they have done. I feel this will help them.”

Readers can visit https://www.justgiving.com/fundraising/william-webster3 if they wish to donate.

Britain's Luckiest Dog Survives Despite Being Run Over - By FOUR Trains