This shocking video shows a horde of rats running wild in a busy city centre in broad daylight.

Andrea Harte, 27, was walking with her partner Matty Foulkes when she spotted the rodents running amok.

The mother of one said there were about 30 rats on the pavement and scurrying in bushes.

She was on her way to get a massage as a birthday treat when she made the sickening discovery in Plymouth, Devon, and described the situation as “awful”.

Andrea said: “I have never seen so many rats in all my life.

“As we walked down from Sainsbury’s car park, we came across all these rats on the path and in the bushes.

“There was about 30 of them. There were about 15 of them just on the pavement. They were jumping up on the tiles. They were everywhere. I was absolutely mortified.

“In the summer I often go there with my little girl and have a picnic on the grass. We won’t be doing that again.” 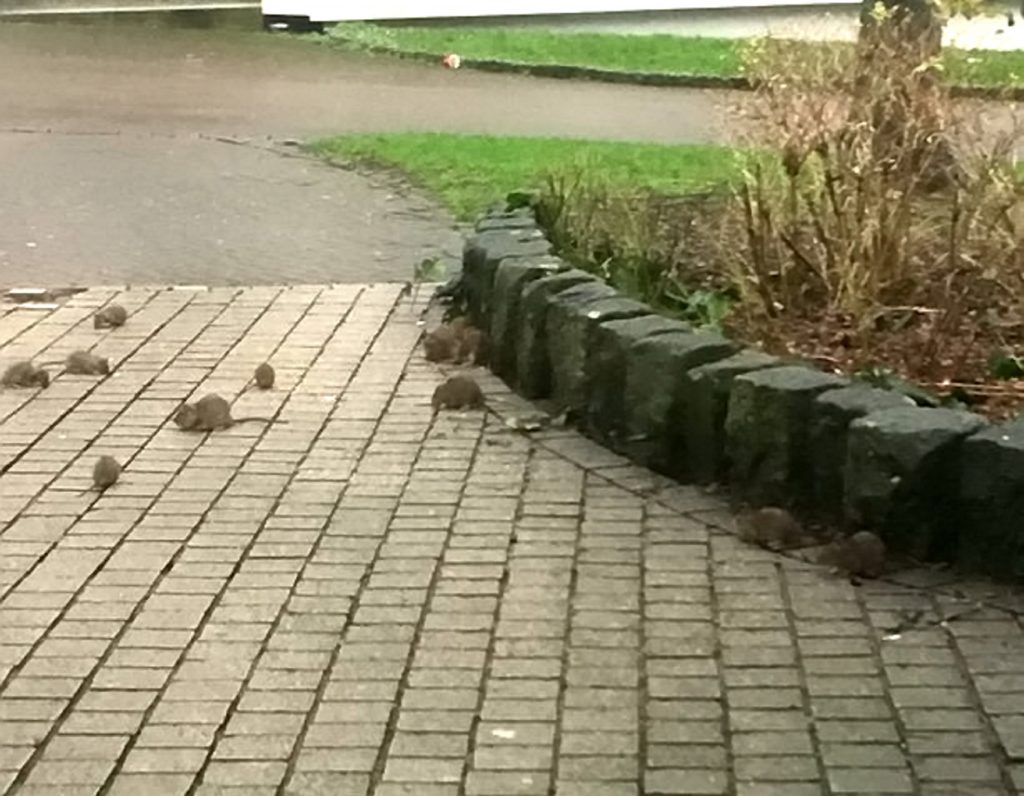 Miss Harte, who works at a Pasty shop on the high street, said she had never seen so many rats in the area.

She added: “It needs to be sorted out. Nobody is going to want to come to Plymouth with that many rats around.

“Every so often you see one or two but I have never seen as many as there was today.

“I was a bit worried. They can bite and they carry so many diseases.”

Miss Harte said a man was feeding seagulls on the same street, which she fears could exacerbate the issue.

“It’s just going to make the problem worse,” she added.

“If you feed the birds you might as well just feed the rats too.

“Something needs to be done about it.”

She added that she had reported the matter to Plymouth City Council, and has since seen a worker dealing with the issue.

A council spokesman said: “We are aware of an isolated rodent issue on Armada Way and have already taken measures to combat this.

“A situation like this is extremely unusual and does not fit with the usual patterns seen in this area, where we know, from our monthly inspections, that rodent activity has been at a very low level.

“It is possible that an event has happened to affect the rodents’ usual habitat which has led to a large number being seen in one particular area.

“In order to prevent rodents, we monitor the flower beds for presence of burrows, runs and droppings to identify rodent activity and, where visible signs are present, we apply appropriate measures in targeted areas.

“Meanwhile, street cleansing takes place in the city centre seven days a week and litter bins are emptied a minimum of twice a day.

“This recent issue is not a typical situation and with the actions being taken to tackle it, should not continue.”