Darcy Raine Cheshire has a meltdown after pre school where she was told she couldn't be a superhero in their nativity play.

This is the hilarious moment a toddler had a meltdown after she was cast as an angel in the school nativity – when she wanted to be SPIDERMAN.

Darcy Raine Cheshire, three, was in floods of tears when her mother picked her up from pre-school after roles had been dished out for the traditional Christmas play.

The tot – who has four big brothers – had been told her class would be playing the angels in Hambleton Primary Academy’s nativity.

Her mum and dad Aaron, 37, a scaffolding boss, showed the video to the teachers at school – and they have agreed that she can be a superhero in the school show.

It even gained her one line directed towards baby Jesus: “You should be brave like Batman.”

Dad Aaron, a scaffolding boss, from Poulton-le-Fylde, Lancashire, said: “She comes out with the funniest things.

“She can be very loud and she’s very funny. She is very strong minded for a child of her age.

“The things she comes out with, sometimes she’s more like an 18-year-old.”

Little Darcy loves superheroes, and had a meltdown in the car when her mum picked her up on Friday.

The funny video of her tantrum shows her kicking her feet and waving her arms screaming.

When her mum asks what she does like, if she doesn’t like baby Jesus, the little girl answers: “Batman”. 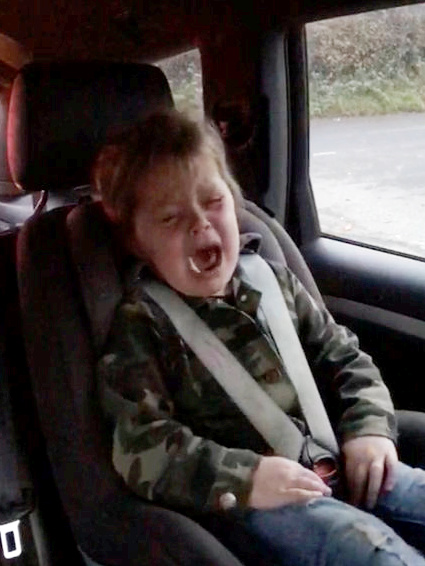 She sobs as her mum explains she will be a “beautiful angel”, but Darcy screams “I don’t want angel”.

And when her mum asks what she should do for the costume, Darcy answers: “Get me a Batman outfit with not a skirt one. A normal one with pants and a cape. I don’t like angels.”