This is the hilarious moment a man danced along an entire high street after realising he didn't have any change for a busker.

This is the feel-good moment a passer-by danced along with a busker after realising he didn’t have any change.

The unidentified man was seen thrusting his hips along Cheltenham High Street in Gloucestershire as the busker played Ed Sheeran’s Shape of You on his saxophone.

At one point he appears to stop traffic as he moves into the road while waving his hands in the air.

Onlooker Courtney Wilson, 21, captured the touching moment while out shopping on Wednesday (01/08).

She said: “I was on the phone to my boyfriend and he heard the saxophone in the background and said it sounded really good.

“I told him I’d go over and film the busker so I could show him later.

“When I whipped out my phone the guy with the rucksack mooched over.

“It was just perfect timing.

“He start off by tapping his feet then it went from there.

“Within seconds there was a crowd of around 20 people behind me and they were loving it.

“Every time he went to leave people were cheering him to come back.

“Each time he came back he seemed to have more and more energy.

“He was just brilliant, he made me want to get up there and dance.

“After the song finished the man went up to shake the musician’s hand. They were both laughing.

“I don’t think he had any change on him so showed appreciation in his own way.

“I’ve watched it back so many times it’s just so hilarious. I can’t cope!

“I had been having a really terrible week and then this guy came along and just made my whole month!” 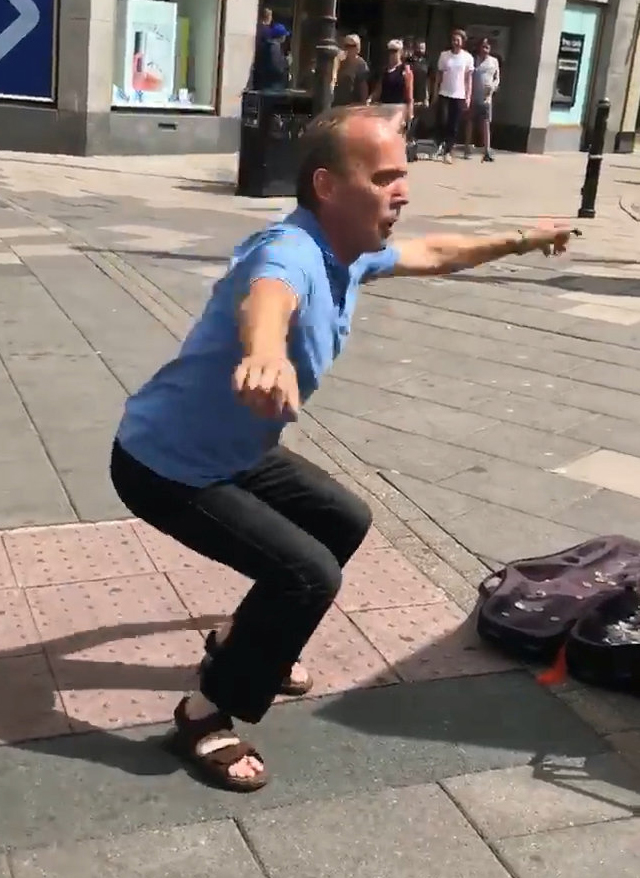 The footage has since been viewed over 90,000 times on social media and has racked up 1,400 shares.

Facebook user Caen Serpa said: “Think I’ve have found a new best pal! Neeeed to find my man and have a seshhhh.”

Michael Sheldon said: “How the busker managed to keep playing while the man’s gyrating his hips I’ll never know..”

Natalie Abbott said: “Roaring when he came back to dance again!”