A grateful wife has praised a pregnant mum-of-nine for saving her husband from a burning car and keeping him awake – by telling him she is expecting her TENTH child.

Sue Bennett says she believes her husband Ken, 70, would not be alive if not for the heroic actions of petite Tracy Archer, 39 – who is “absolutely terrified” of fire.

The 5 foot 3 mum-of-nine leapt into action and led dazed Ken away from his blazing car, chatting to him to keep him alert – and her revelation about how big her brood is really caught his attention.

Ken’s grateful wife Sue, from Lydney, Glos., met with Tracy yesterday (Mon), and said: “We are just so very grateful to her for saving his life.

“She kept him alert by talking to him and the fact that she was expecting her tenth child really did seem to catch his attention.

“We thought we had a big family with five children and I think he was struggling to imagine what it would have been like with five more running around the house.”

Sue added: “Ken told me she was amazing, even offering to let him rest his head on her bump to make him laugh. I’m so glad for this opportunity to tell her how grateful we all are.” 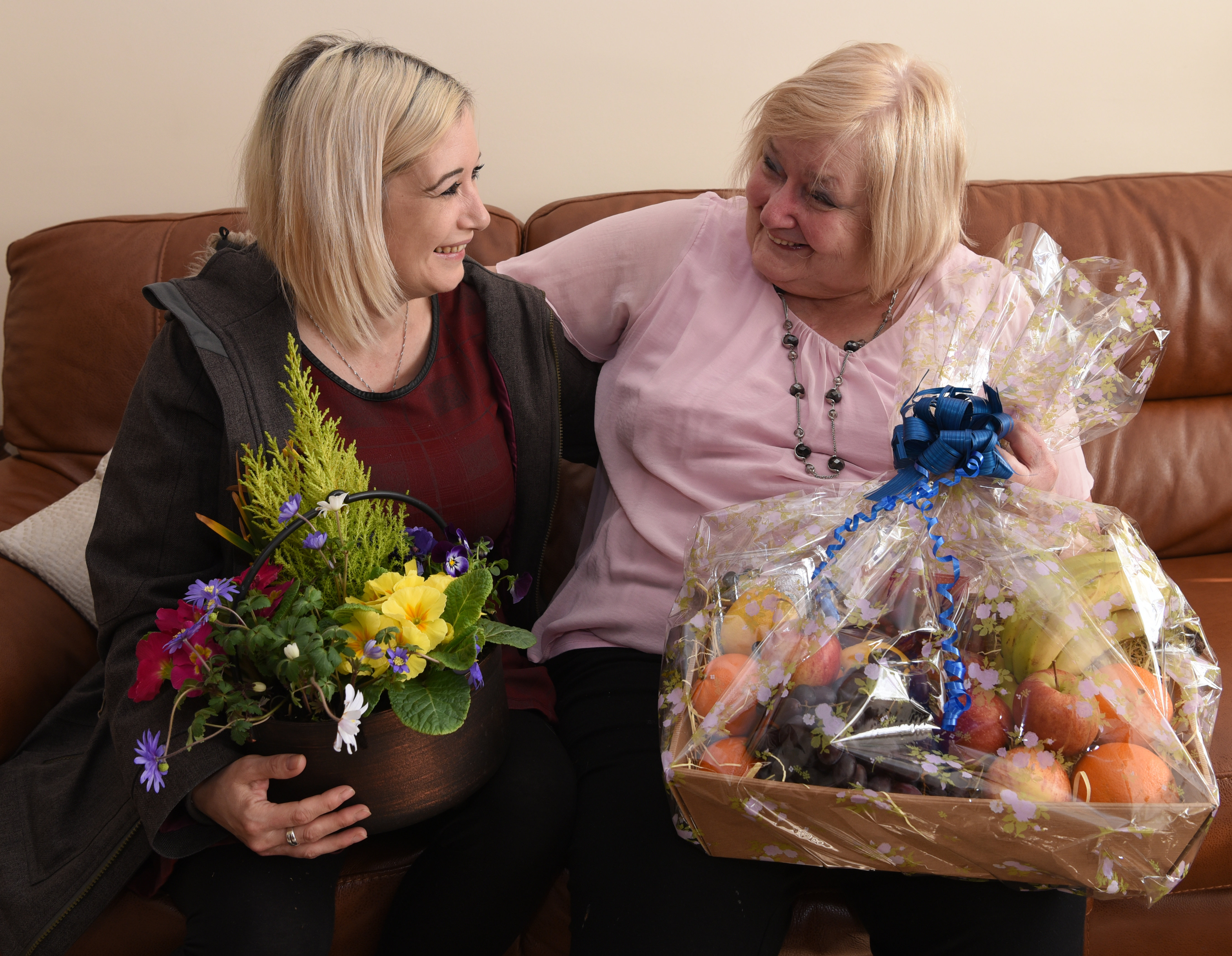 And Tracy said: “I knew I had to keep him chatting because I could see he was in a lot of pain and just wanted to fall asleep.

“What do you talk about in circumstances like that? I asked him about his family and he said he had five children – three girls, two boys – as well as four grandchildren.

“I told him ‘I’m about to have twice as many as you’, which really seemed to wake him up.

Grandparents-of-four Ken and Sue moved to Lydney from Cheltenham just under two years ago, where Ken works as a Police Community Support Officer.

The couple were supposed to be going away to Bournemouth last Friday, and so Sue was waiting for her husband to return home from the gym.

But she was blissfully unaware that Ken had been involved in a serious head-on collision on the A48 near Newnham, and was being airlifted to Southmead Hospital in Bristol.

Sue said: “We were supposed to be going away to Bournemouth so I was calling him all the names under the sun because he was late.

“While I was waiting somebody called from his phone but I could not hear what they were saying because the signal was so bad. It was somebody from the ambulance.

“As I was trying to hear what they were saying a police family liaison officer turned up on the doorstep and said Ken had been in a car accident and it was serious.

“I was taken blues and twos to Southmead Hospital.”

Meanwhile, former bar manager Tracy was at the scene of the crash with two of her teenage children and a baby, trying to keep Ken conscious until the emergency services arrived.

Tracy, who has eight sons and a daughter, aged four to 22, said: “I am absolutely terrified of fire, so I’m guessing the adrenaline must have kicked in.

“Obviously I know you are not supposed to move somebody who is injured and originally I intended just sitting in the passenger seat and talking to him.

“But the smoke and flames were getting pretty bad so I thought it was best to get him out. Everything was dented and I really had to pull the door to open it.

“He was clutching his chest so I unclipped his seat belt and told him to lean on me to get out the car. I didn’t want to panic him or let him sleep so I just kept talking to him.”

She led him away from the car and put her coat on the ground so he could lie down, while her 15-year-old daughter Natalie wrapped him in a dressing gown from the car.

At first it was feared Ken’s injuries could be life-threatening, but medics say the severe pain he was in was due to him breaking five ribs, his sternum and a shoulder in the crash.

Tracy said: “At first I was in shock, but now I keep thinking that in a way we were really, really fortunate and should count our blessings.

“We were heading towards the 30 mile per hour zone, so if we had been on another faster section of the road it might have been a very different story.”

She is hoping to go and visit him in hospital, where doctors are trying to control the pain so he can go back home in time for Easter.

“They are a lovely, lovely couple,” Tracy added about Ken and Sue, who gifted Tracy a basket of flowers and Easter eggs for her children.

“She was crying and saying, ‘I don’t know what I would have done without him’.”

Tracy also praised her teenage children, Natalie and Alex, and another lady who also came to help, who has been named on social media as Janet MacDonald.

The busy stretch of road, between Elton Corner and Howell’s Lane in Blakeney was closed for around five hours after the crash, which happened about 11am on Friday.

It involved a Vauxhall Corsa and a Kia Sorento and police say a 70-year-old man was airlifted to Southmead Hospital.

Police are urging witnesses to come forward on 101 if they haven’t already done so, quoting incident 161 of 23 March.