by Adam Theofilatos
in News
0

Kenneth Mockford, 54 with his F35 flight simulator that he has built in a shed in Burwell, Cambridgeshire.

A grandfather has spent more than £30,000 building a home-made F-35B lightning fighter jet simulator – in his garden SHED.

Kenneth Mockford, 54, shut himself away “from dawn until dusk” to construct the replica aircraft from hundreds of tiny pieces.

He put it together by googling photos of the military fighter jet, which are currently being used for training by Royal Air Force and Royal Navy pilots.

Kenneth, who stems from a line of RAF veterans built the fascinating machine, said: “I spent many late nights constructing the F-35 in my garden shed then loaded it on a truck and moved it to a warehouse for flying.

“I started the plane with just a fuselage which I acquired.

“All of the other components like the seats, the main instrument panel, all the switches and buttons that are in there I have made because they are not available to buy.

“I am a nutty engineer, basically.

“Dimensions were a major issue for me when building because nobody is going to let me climb on their F-35.

“So what I do is I research the internet for photographs and there are thousands of pilots sitting in cockpits.

“From what I do from that is I scale the mains instrument panel of the size of the hands of the pilots that are flying in them or sitting in them.

Kenneth, from Burwell, Cambidgeshire uses a home-made laser cutter and a Computer Numerical Controller (CNC) to cut and shape all the parts of the simulator.

“Sizewize I think I have it all pretty close and the dimensions are about 95% accurate,” he added.

“I began building the F-35 in April, but luckily I didn’t need to build the fuselage had already been built so all I had to with with that is take it apart and rebuild it.

“I built the main instrument panel from scratch and all the electrical switch panels I made as well.

Kenneth’s love for flying lead to him starting up his own simulator business in Mildenhall, Suffolk.

In 2014, the dad-of-two quit his secure job as Head of Engineering at Baxter Healthcare UK and turned his shed into an airhanger.

Along with his father, Ray, who sadly passed away in 2016, Kenneth launched his flight simulator business.

The impressive F-35 jet is the third large scale simulator that he has constructed in the garden of his home he shared with wife Martene, 50.

He has also built a Boeing 737-800 and a Lynx helicopter, which now operate from his simulator business, Sim2do in Mildenhall, Suffolk.

And Kenneth credits his incredibly technical work to his Autism, which he says works as a ‘superpower’ when it comes to mechanics.

“I have Asperger Syndrome and I always say that it is my gift. It is my superpower,” he said.

“Because I have that , I have the skill of being able to analyse things to the nth degree and I can see things in a way that other people cannot.

“Therefore I can see minute detail in a basic photograph and can see the detail before the general stuff.

“People with Autism and Aspergers often get ridiculed by the general population because they are not the same as everyone else.

Kenneth’s simulator is based on the F-35 Lightning stealth jets which landed in the UK in June this year.

The £92million supersonic planes based at RAF Marham in Norfolk are expected to be in operation by the end of 2018.

And Kenneth says the completion of his F-35 simulators were timely, considering the excitement around the arrival of the new RAF jets.

“But a friend of mine bought this fuselage and I bought it from him and it looked just like an F35.

“And I thought what great inspiration that they have only just arrived in the UK and they are the most modern fighter aircraft available today throughout the world.

“A lot of the countries in Europe are getting them because they are going to be the fighter of the future.

Since completing his jet, Kenneth has even received suspicious phone calls, questioning how he built it.

He added: “We have had loads of interest and the odd weird phone call.

“I will answer the phone and someone on the other end will abruptly ask me ‘ where did you get all the information from?’

“They imply that I am secrets from somewhere, which I am not.

“And my response everytime is ‘google’ because that is where it has all come from.

“Whoever it is on the other side is someone who definitely thinks I shouldn’t have all of this information.

“I don’t know who it is but I find it quite funny when they call up as if they are trying to protect something.”

Kenneth says that his F-35 is particularly special to him, as he named it after a young lad, who he refers to only as ‘Dom’.

Plane- lover Dom, spent time in Kenneth’s workshop helping build a previous simulator, but sadly lost his life to cancer only days before he was hoping to test out the F-35.

Kenneth said: “I have numbered the jet DOMO2121 and the reason for that is that there was a young chap who sadly passed away.

“He came to spend the day with me when I was in my shed and he really go inspired and came out of his shell.

“He was going to come and try out the F-35 when it was finished but sadly about a week before I was due to finish.

“In hommage to him I have numbered the aircraft after him.”

Kenneth’s life had always been built around flying and he trained as an electrical mechanical engineer.

His father served in the Royal Air Force in Rhodesia and later worked for an aircraft manufacturer in Africa, while his grand-father Arthur, and great-uncle Derf all served in the RAF. 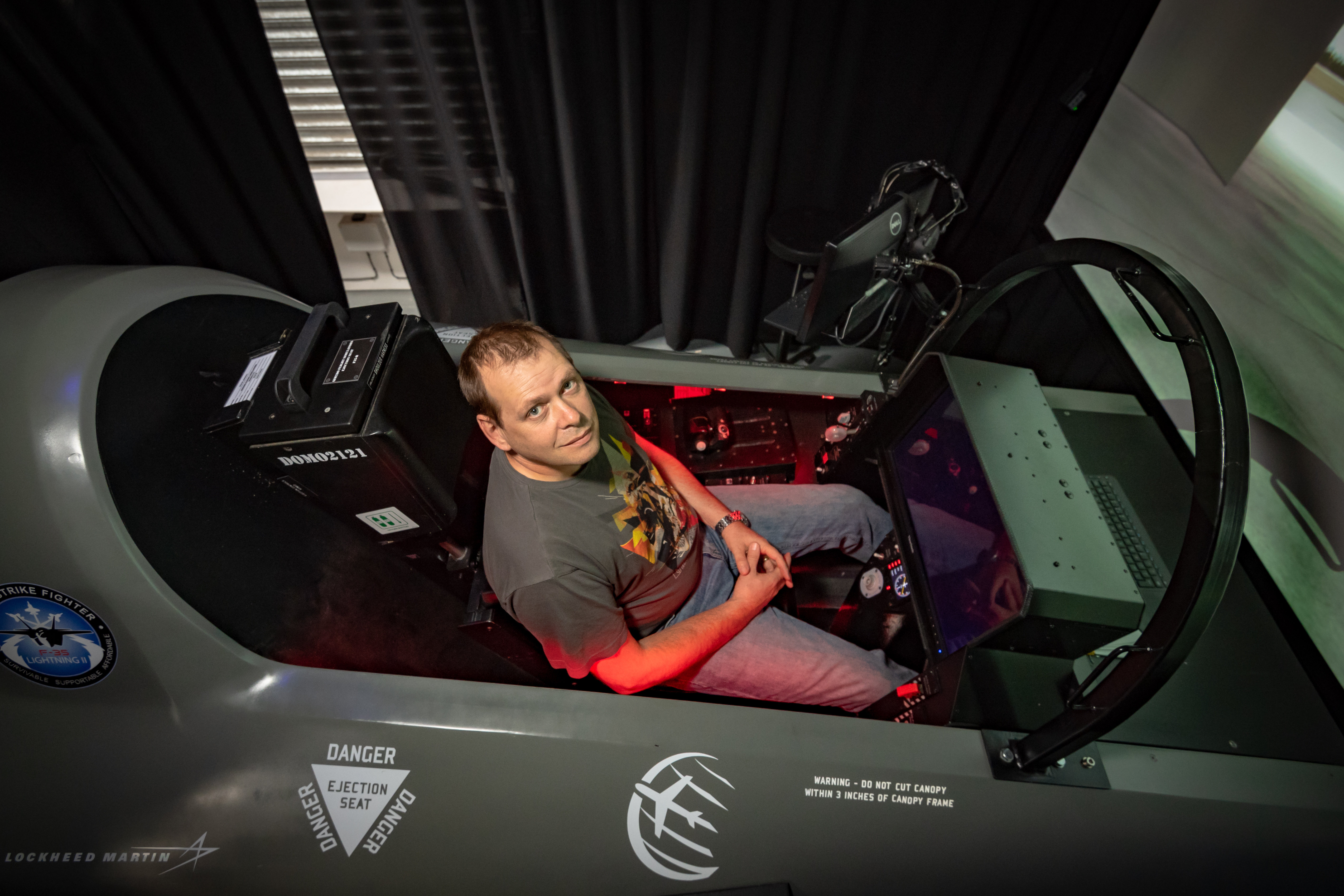 Kenneth, who was born in Birmingham, served in the South African air force before moving to the UK in 1995.

“My love of flying started when my dad started buying helicopter radios for the police,” he said.

“When I was knee-high to a grasshopper, we would go to the airfield at weekends and I’d spend hours flying in the aircraft.

“I guess you can say I was born with it my blood.”

Kenneth charges £59.99 for an hour-long flight in the simulator, which includes a briefing.

How AI could create more jobs than it replaces