Steph Jeavons on her bike in Africa.

A grandmother has become the first Brit to reach every continent on a motorbike – on a journey of almost 80,000 miles.

Steph Jeavons, 42, sold all her belongings before setting off four years ago on a 250cc dirt bike.

The adventurer, from Colwyn Bay, north Wales, had been dreaming of the expedition for 20 years before she finally left in 2014.

She finally returned on Sunday, to the Ace Cafe in Stonebridge Park, north west London – almost four years after she set from there.

The mum-of-one was determined to go on the once-in-a-lifetime journey after having her son Nathan aged 24.

She even became a grandmother to Alexis, three, while she was in India, on the same day she first saw a wild tiger.

Steph has now become the first Britain to lap the globe touching all seven continents on her trusty Honda CRF250L – nicknamed Rhonda the Honda.

She said: “I wanted to have a big trip years ago and I was 18 when I started thinking about it – originally it was just Borneo to see orangutans and it went on from there.

“I had my son Nathan when I was 18 which reinforced that dream, and I was a mortgage adviser until 2008 but I decided to change my life and set up an off road motorcycle school in Wales with a business partner. 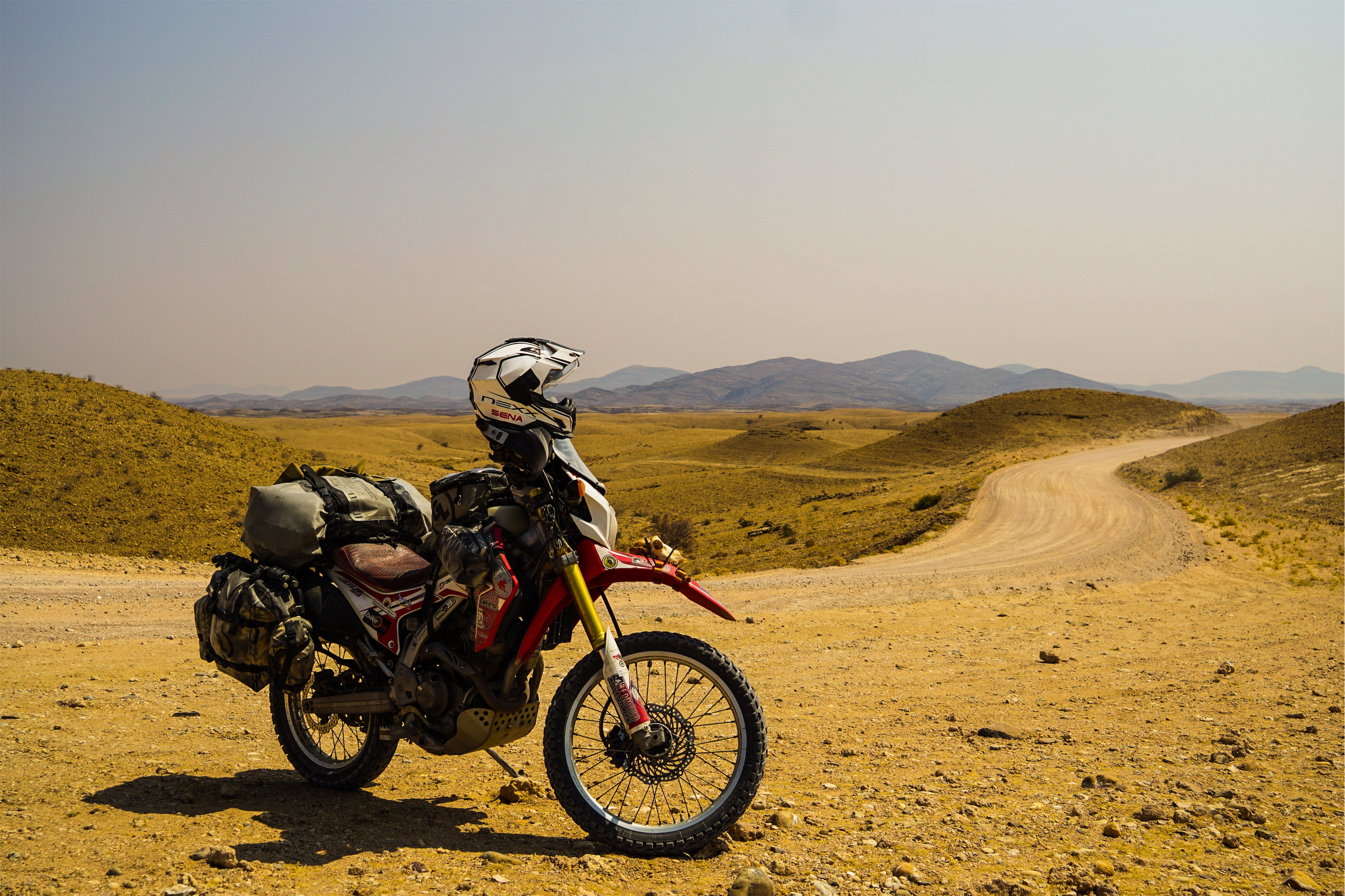 “Within six months of setting up, Honda offered us a contract and within 12 months we became the biggest off road school in the UK, also running tours in Morocco.

“Eventually, I decided to ride to all seven continents, and a couple of tequilas convinced me I could do it.

“I drew a big line across the globe on a map in my office and started researching where I wanted to go.

“I realised certain things would be more difficult – I wanted to go through China – but it was very expensive, and I would’ve had to have a guide, so that dictated my route a little bit.

“Antarctica was a big one for me, just because it was a challenge, and people said I wouldn’t be able to get my bike there, but we managed it on a tiny sailing yacht across the notoriously rough Drake Passage.

“It was extremely emotional, it really was a dream come true.

“I left aged 38 – it was never going to happen if I didn’t just set a date and had said I’d leave on my 40th birthday, but actually ended up leaving early.

“I’ve done almost 80,000 miles across four years of travel, with about six hours a day on the bike, covering 50 countries.”

Steph’s ‘absolutely perfect’ companion, Rhonda the Honda, has broken down just once during her journey.

She said highlights of the ride included Ethiopia, Colombia, Iran and Mexico – countries she had initially been nervous to visit.

Steph made her triumphant return to London at the Ace Cafe on Sunday, four years after she set off.

She added: “The bike has been dead reliable, it’s really small bike and not a tourer because I wanted a dirt bike for off road and the mountains.

“I went home briefly from Canada, I had some injuries so I went home for physio, and got to meet Alexis, which was lovely.

“It’s really difficult to choose my favourite – I loved a lot of the countries I was nervous of visiting.

“There were a lot of ups and downs, it really was a rollercoaster and there were some bits I didn’t enjoy – Argentina was a bit of a low after the high of Antarctica.

“India was quite a difficult place to ride because it was 40 degree heat, the traffic is as bad as people say it is, and I got quite sick from heat exhaustion.

“People in most places are telling you that the next place is dangerous but I’ve never really had trouble, 95 per cent of the people I’ve met have been exceptionally friendly and helpful.

“I think it’s because I’m a strong woman on a bike and they’re interested in my story, they want to help.

“With places like Iran, my friends and family were nervous of me going there alone, but every time I stopped locals were trying to take me home and feed me – my biggest danger was probably getting fat.

“Eastern Europe when I was still getting my grounding felt unsafe, because I was learning to cope alone and how to read people, but it was more about perspective.”

Super-gran Steph said despite initial doubts from family and friends, they have been incredibly supportive of her grand tour.

She flogged her house, business, belongings and bike before leaving a few sentimental items in her parents’ attic.

Steph said: “I don’t think people believed I’d do it, they thought I was full of it and even talking to my parents their eyes glazed over, but I was obsessed with the idea of the trip.

“My family are bikers too and they were very supportive, my friends said they knew I’d do it but that I could come home whenever I wanted.

“Everyone had faith in me but I was terrified, they thought I knew what I was doing but I didn’t.

“People loved that I was giving it a go, and they were impressed whatever happened.

“I sold everything, it was all or nothing for me and I couldn’t put things on hold so I just went for it, basically all I was left with was a couple of boxes in my parents’ attic.”