A golfer who uses just one arm to play his shots is set to become the first paraplegic captain of an able-bodied club in the world.

Terry Kirby, 63, was a budding new golfer before – in a devastating turn of events – he lost all feeling below his chest following the removal of a tumour found on his spinal cord.

Inspirational Terry, who had one leg shorter than the other, was visiting the doctors in 1994 to be given a shoe stint.

However, after a doctor commented about the weakness in Terry’s legs, he was rushed into Hull Royal Hospital. 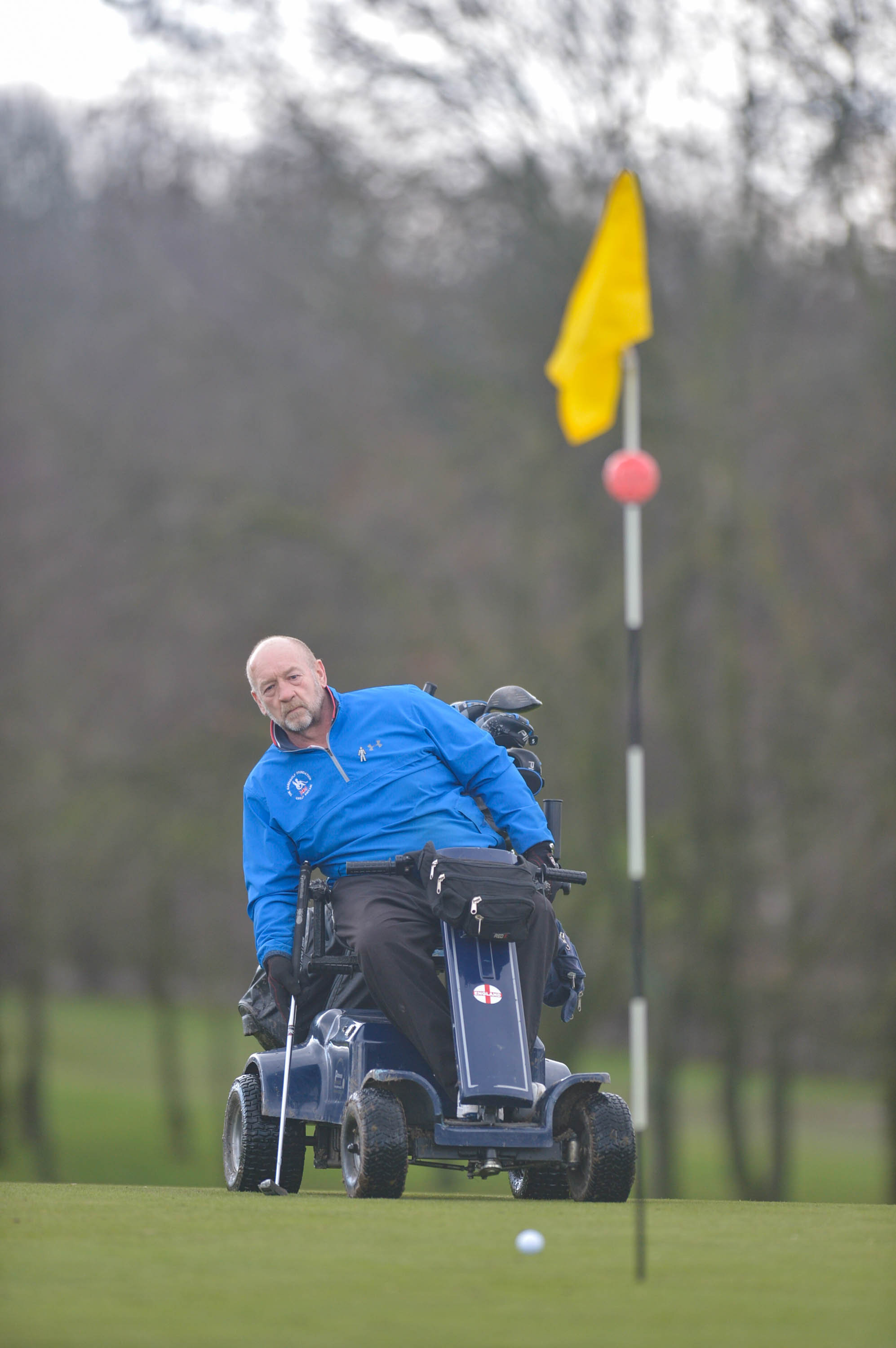 Once in hospital, doctors gave Terry, who served in the army for 12 years, the horrific news that they’d found a 2.5in tumour on his spinal cord.

It was thought to have been the result of a motorcycle crash while he was stationed in Cyprus with the Royal Engineers 15 years earlier.

Just four days later he had surgery to remove the non-cancerous tumour – which left Terry with no feeling on his left side.

Almost six months later, another scan revealed part of the tumour remained on Terry’s spinal cord and, following further surgery, he became paraplegic – with no feeling below his chest.

Determined not to let his new condition stop him and to ‘get on with it’, Terry took just six weeks post-surgery to return to the greens on his electric buggy.

Now, almost 25 years to the day since his surgery to remove the tumour, Terry is set to captain his able-bodied club and become the first disabled golfer to do so in recorded history.

Terry, who plays more than three times a week off a golf handicap of 26 alongside able-bodied competitors, said: “I was absolutely chuffed to bits to be chosen.

“I am honoured to be the captain of a club which has done so much for me and never treated me any differently.”

Terry, who lives in Hull, East Yorks., with his fiance Jillian, 53, said he has never let his condition stop him achieving his dreams.

Despite taking up golf 18 months before his surgery, Terry never let it cross his mind that he may have to stop after the devastating diagnosis.

He travels to play golf in Chesterfield, Derbys., three or four times a week.

Terry said: “I was always going to get back out on the course.

“Just six weeks after my surgery I was passed a leaflet by my doctor which advertised disabled golfing and I knew I wanted to get back into it.

“My brother said at the time he would have been devastated if he was in the same position but I never thought about it like that, I never let everything which was happening get me down.

“I just took it in my stride and got on with it.”

Terry, who has played golf around the world including in Spain, Germany and France, has adapted his style to be able to swing at the ball using just one arm – sitting in his buggy.

When he first began to play golf in the buggy, Terry would position himself sideways and use a regular swing with both arms.

However, due to lack of hip rotation because of his condition, Terry realised he could get a fuller and more complete swing using just his right arm.

He added: “I have seen the benefits since I switched.

“My swing has improved a lot since I started to just use one arm, I can get more rotation and direction in my backswing.”

Terry, who also played amateur rugby before his accident, has been a member at Tapton Golf Club in Chesterfield, South Yorks., for the last ten years.

In February, he will become the first disabled person to captain an able-bodied club.

Describing the moment he was given the news, Terry said: “I have been friends with the former captain and vice captain for a long time.

“The captaincy is usually given to someone who is supportive of the club and I have been a member for a long time now.

“I feel completely honoured to be given the title.

“I am chuffed to bits, almost 25 years exactly since the surgery and I can say I am captain at the club.

“At one stage it looked like I would never be able to play golf again so to have come this far is brilliant.”

Terry is the chairman of the ‘Handigolf foundation’ who are organisers of the ‘disabled British Open’.

What are your driver license requirements for renting in the US?

What are your driver license requirements for renting in the US?