Greg Stevenson, lost both legs in Afghanistan, and has started working at Specialist Mobility Rehabilitation Centre as a physical training instructor.

A war veteran who lost both his legs to a bomb blast in Afghanistan has found new purpose as a personal trainer at the limb centre where his injuries were treated.

Former Royal Engineer Greg Stevenson, 33, lost one leg above and the other below the knee when he stepped on an IED while on patrol in the war zone in 2009.

The soldier and father-of-two was was flown to Camp Bastion for life-saving surgery before being transferred to the UK to Selly Oak Hospital in Birmingham.

After being fitted with prosthetic legs the former serviceman became qualified as a personal trainer and is now working at the SMRC as a physical training instructor.

He said: “I was a Royal Engineer and had been in the Army for four years and was injured in my first tour.

“It was just a routine foot patrol and I had pushed into a building to get up on the rooftop for a better view of the area when I stood on an improvised explosive device.

“I remember experiencing a fairground ride sensation of being thrown and my stomach not feeling right.

“The initial pain was in my face but as I came to it became evident I had lost my legs.

“The the other lads pulled me out and got me into the helicopter.”

Greg, of Colne, Lancs., is an above knee and a below the knee amputee.

He said: “In Afghanistan people getting injured and killed was such a regular occurrence that at first I was quite accepting and pragmatic about what happened.

“But as time went on I realised the extent of my injuries and how difficult it was to walk on prosthetic legs and the difference to my lifestyle.

“Before this happened I loved playing football and was a keen runner.

“It was about coming to terms with the fact I wasn’t going to be able to do things as easily any more.”

Greg was was one of the first veterans from the Afghanistan programme at the centre and he cannot praise the care he received highly enough. 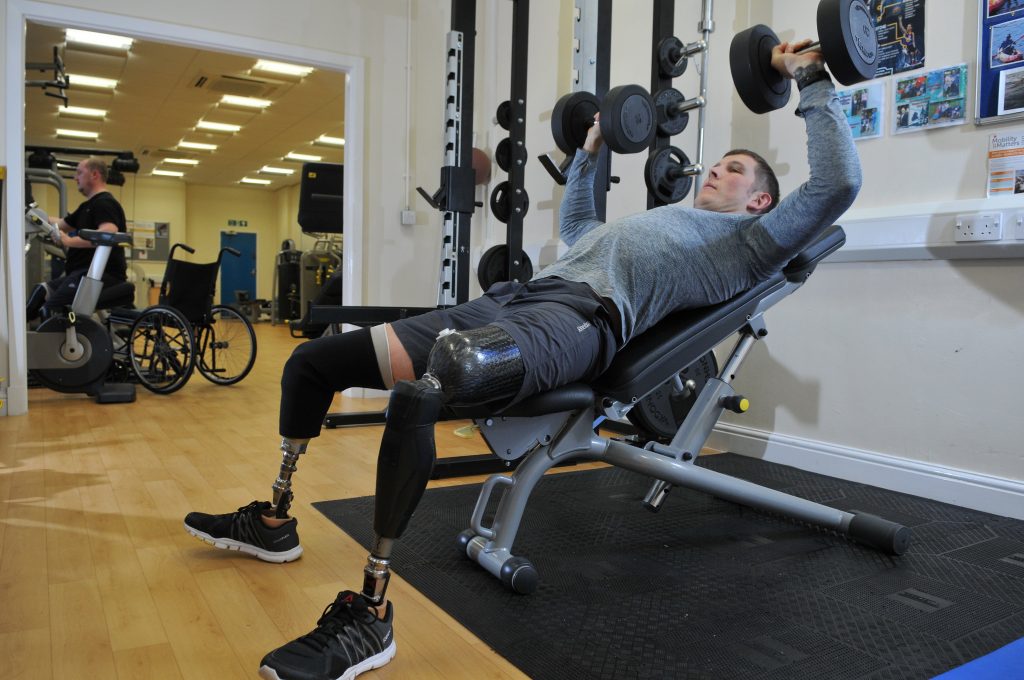 He said: “I have got the best prosthetic legs you can get and have also got running legs.

“But the centre is not just about prosthetics – it has a gym and offers counselling as well. It is first class.”

“I specialise in exercise and disability referral and my aim is to help people with disabilities get back to exercise.

“I also want to help those who want to take their exercise further and challenge their disability.

“I want to inspire the disabled community to make changes to their lifestyle.

“I am still a patient at the centre and it feels strange being at the other side and working here as well.

“But I am proud of myself as well for what I have achieved.”