Victoria the polar bear and her new cub seen their outdoor enclosure at Highland Wildlife Park for the first time.

The first polar bear cub born in Britain in a quarter of a century made its first public appearance today (Tues).

The adorable cub, born to mother Victoria in December, has remained nameless as zookeepers attempt to determine its sex.

Victoria gave birth in a maternity den at Highland Wildlife Park in Scotland and for a while, the only confirmation was high-pitched noises coming from inside.

The cub and its mother were ensured privacy and caught on cameras as part of a two-year project documenting the breeding and birth.

But Victoria’s cub has now been given access to an outdoor enclosure to increase its confidence — and allow the public a chance to see the fluffy bundle.

The cub was pictured exploring its surroundings today (Tues) and animal fans will have a chance to see it with their own eyes from tomorrow (Wed) onwards.

Una Richardson, head keeper at the wildlife park, said: “Having spent four months in her maternity den, Victoria quickly took the chance to go outside.

“Understandably, her cub has been more cautious and is still getting used to new sights, smells and sounds.

“While the cub will become more confident and start to explore the large enclosure with Victoria, this will take time and they will always have access to their den for peace and quiet.

“There is no guarantee all of our visitors will see the cub at this early age but they may be lucky.

“There is huge interest in the park and seeing a polar bear cub will be a once in a lifetime opportunity for many people, particularly those travelling from around the world.” 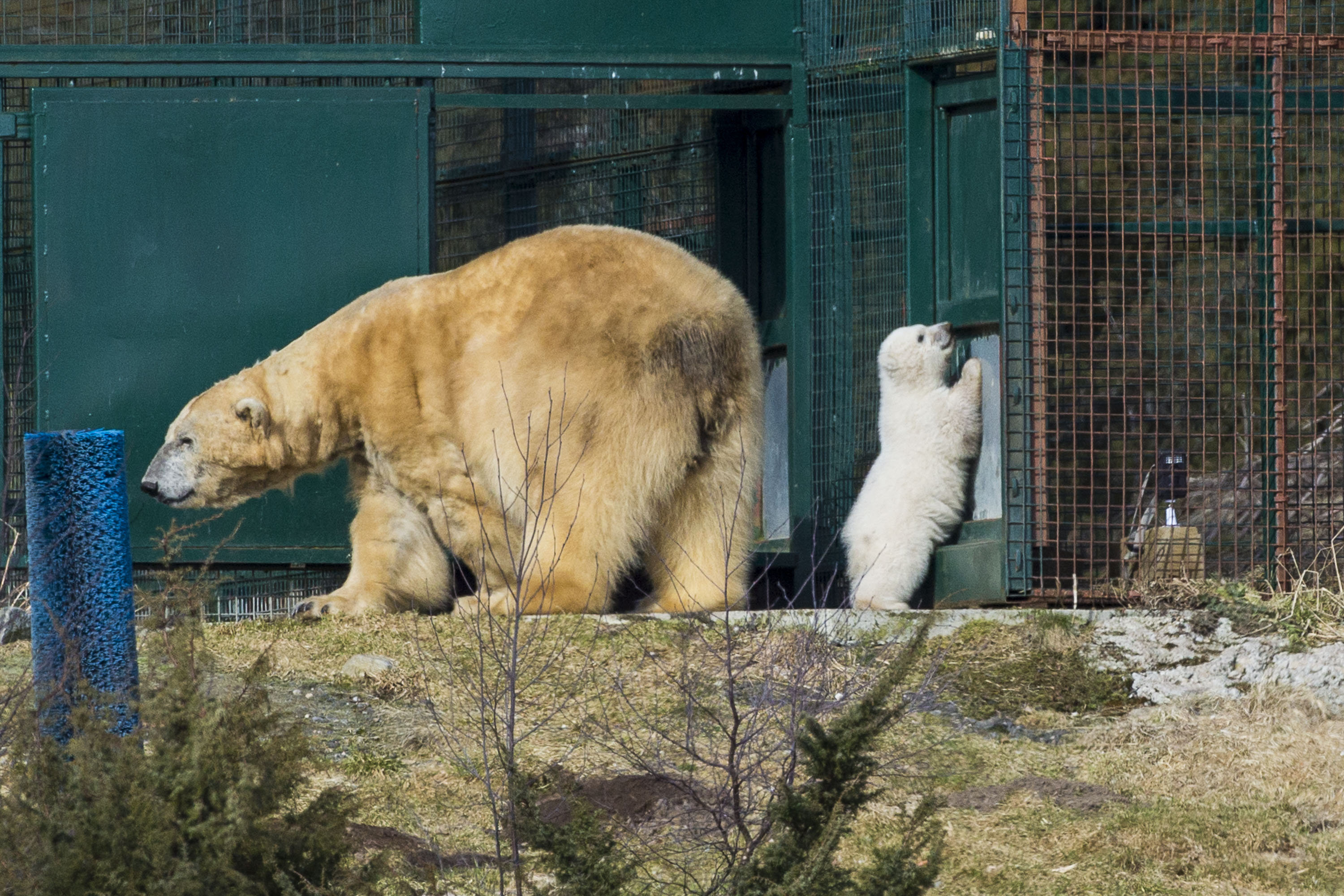 The cub was born in the week before Christmas with mum Victoria — the UK’s only female — having mated with Arktos, one of two male polar bears at the park.

Born blind and initially weighing little more than a guinea pig, the cub is now able to see and is the size of a small dog.

It has been feeding on mum Victoria’s fat-rich milk since being born.

The cub’s sex is still to be revealed but staff at the park in Kincraig, Strathspey and Badenoch, are hoping to name it in the coming weeks.

Douglas Richardson, the park’s head of living collections, said: “Our pioneering captive polar bear management programme closely mirrors what happens in the wild and this birth shows our approach is working.

“This is vital because a healthy and robust captive population may one day be needed to augment numbers in the wild, such are the threats to the species from climate change and human pressures.

“The reintroduction of polar bears would be an enormous task but we need to have the option.

“While our cub will never be in the wild, there is a chance its offspring may be in decades to come.” 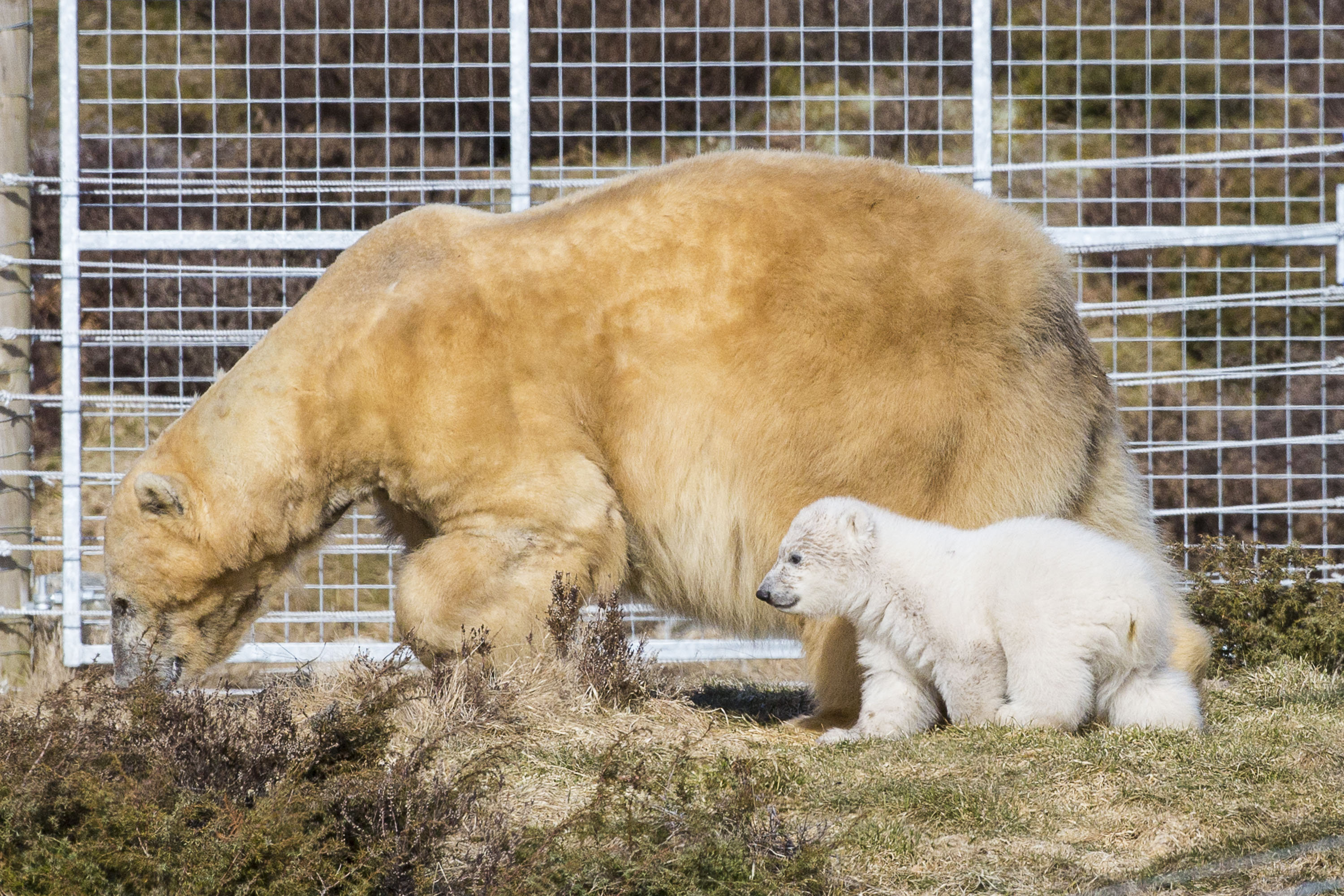 The last polar bear cubs born in the UK were twins at Flamingo Land in Yorkshire on 8 December 1992.

Victoria previously gave birth at Aalborg Zoo in Denmark in 2008, having been born in 1996 at Rostock Zoo in Germany.

She arrived at RZSS Highland Wildlife Park in March 2015.

Arktos arrived at the park in April 2012 from Hannover Zoo in Germany, having been born at Vienna Zoo in 2008.

Polar bears mate between March and June, with females normally giving birth to one or two cubs in November or December.

RZSS Chief Executive Barbara Smith added: “The birth of the first polar bear in the UK for a quarter of a century is a huge achievement for the Royal Zoological Society of Scotland and the team at our Highland Wildlife Park.

“We are hopeful our cub will help to raise awareness of the dangers to polar bears in the wild. Collectively, we must do all we can to protect this magnificent species.”