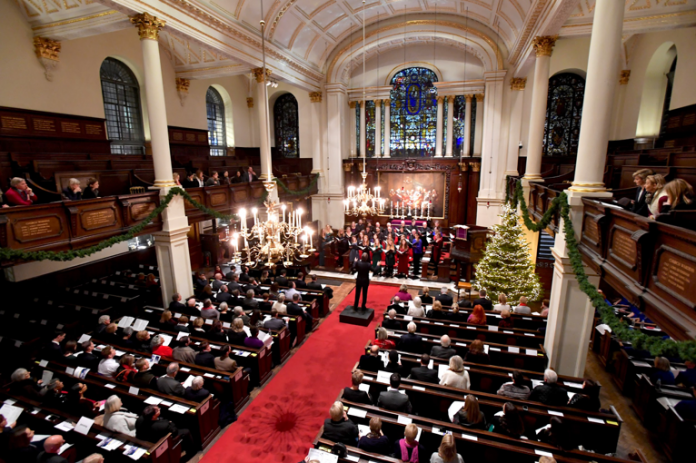 The Carers Trust works to support anyone living with the many challenges of caring, unpaid, for a family member or friend who is ill, frail, disabled or has mental health or addiction problems. The UK charity works with a wide network of partners to helps carers get the extra help they need to live their own lives. They facilitate replacement care, emotional support, practical help and access to much needed breaks.

250 lucky guests gathered at the concert (hosted by Carers Trust’s corporate partner, CLC World Resorts & Hotels) underneath the stunning backdrop, to enjoy a beautiful and festive programme of seasonal music and carols.

To get into the festive mood some of the guests enjoyed a pre-concert drinks reception at The Westbury Mayfair hotel. One or two mulled wines were consumed to help lubricate the vocal chords.

The concert was led by the prestigious City of London Choir under the baton of its renowned Director, Hilary Davan Wetton.

However, the real treat was when a choir of carers from Northamptonshire Carers, one of Carers Trust’s Network Partners, came on stage to perform. The carers gave an absolutely beautiful rendition of a song specially composed for them, ‘A child is born in Bethlehem’. It’s fair to say there wasn’t a dry eye in the house and the carers received a standing ovation from the entire audience.

If that wasn’t enough to move even Ebenezer Scrooge’s cold heart, the tears were in full flow after Jaycee Labouche, a carer from Wandsworth, delivered an incredibly poignant reading of her own poem. Her poem Unconditionally described the pressures she has to face every day as a carer for her 90-year-old father.

If was a truly magical evening with music, singing, recognition, joy, laughs, and tears.

“CLC World Resorts & Hotels was honoured once again to sponsor the Carers Trust Christmas Carol Concert. A great evening was had by all as we raised funds for Carers Trust to enable them to continue their work supporting 500,000 of the UK’s 7 million unpaid carers and help them extend that assistance even further.”

Carers Trust would like to offer its sincere thanks to the following for making tonight such a memorable evening:

Dawn Ellmore Employment on celebrity trade marks and their attempts