A family hand-reared an orphan MAGPIE which now visits their home everyday – eating roast dinners, hopping in the shower and even drinking their beer.

Danny Burgess, 32, and partner Katie Murphy, 26, stumbled across the baby bird while walking their dog.

The launched a seven-week road to recovery which saw the couple set up a make-shift home from an old rabbit hutch.

The magpie eventually flew the roost and lives in a nearby tree – but still comes back to see them every day often to sleep and eat.

Now the magpie – who the couple have named Josie – has become so accustomed to the family that she even helps herself to a can of lager during family BBQs.

Danny said: “She’s an absolute character. But there’s no getting rid of her. I used to shoo her out but she always found a way to swoop back in.

“I’ve never had anyone so keen to become my friend.”

Josie first swanned into the couple’s lives after falling from her nest near their home in Braintree, Essex.

Danny said: “At first we thought she was dead. But my dog Dakota kept lingering nearby and I noticed her little wing twitch.

“Knowing she was alive I didn’t want to leave her there. Flies were already hovering around and I thought it would only be a matter of time before the foxes would pounce.

“It looked as though she had tried to fly the nest but got in a spot of bother. So we wrapped her in my jacket and took her home where we set up an enclosure.

“Every morning we would feed her water through a pipette and would water down Dakota’s dog food for her to eat.

“We were expecting the worse to happen and only expected to look after her for a day or two.”

The past five months have seen Josie muscle her way into the family.

Danny said: “She’s really seemed to have taken to us. Honestly it’s like having a cat. She’ll go off and do her own thing but come back and bring the sass.

“Magpies are meant to be attracted to shiny things.

“But she just likes to cause mischief. She’ll come over and peck your foot then take a few steps back then do it again.

“We’ve been outside a lot recently because of the hot weather. We’ll be there having a beer and she’ll come over and take a sip.

“She’ll be a bit wobbly after she just wants to join in everything we do.

“She’s got this new hobby of taking all of Katie’s cigarettes out of the box and tearing them up.

“When we cook a roast on a Sunday she pops to the window waiting for her share.

“During the week she’ll slip in to have some of Dakota’s food as she’s developed the taste for it. She lives in nearby trees.

“I’ll be walking the dog and she’ll see that I’m heading out and fly over.

“Usually she’ll just hop alongside me on the pavement and at other times she’ll jump on my shoulder so I look like a pirate.

“She’s like my sidekick. She plays with Dakota. She’ll peck her leg and go running off. They’re like sisters.

“We let her out at night where she’s meant to sleep in the garden but recently she’s been sleeping on top of the shower rail.

“The only downside is the fact that she poos everywhere! It’s not like we can potty train her like a dog.

“Whenever I go for a shower I’ve got to bleach it. I’m left there scrubbing away for sometime. But aside from that she’s great!” 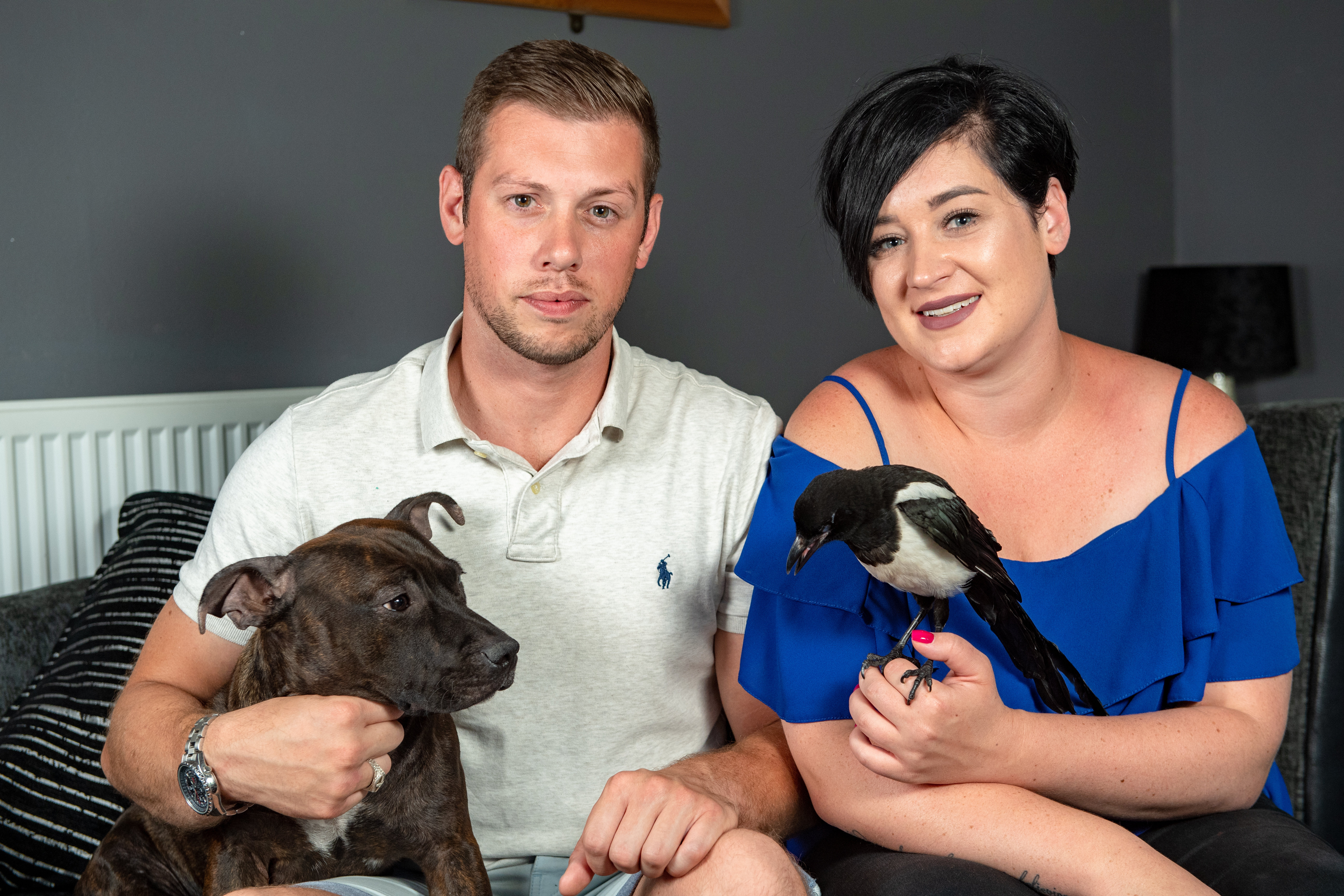 With magpies averaging a life span of three years Danny says Josie is here to stay.

The couple are even convinced Josie may be the spirit of Katie’s late mum Terina who passed away last December.

The dad-of-two added: “It was just mad timing.

“We moved into Terina’s house in January and just a few weeks later we have a new addition to the family.

“It’s as though it’s her reincarnated.

We only moved into this house in January so it will almost be weird not to have her around.

“We’re off for a wedding in Croatia this week and we’ve told the dog sitter to keep an eye on her.

“We treat her as one of our own.

“I just wanted to tell people of the great things that can happen when you help nature out.

“Usually I’d walk by and let nature take its course but if I hadn’t had intervened the little one wouldn’t have made it.

“If we look after animals they in turn will look after us. I mean look, she’s part of the family now. We saved her life and she’s made ours richer.”