Flop the lamb who was stolen from Rayleigh, Essex.

A devastated farmer has pleaded with thieves to return a cherished pet – a lamb dubbed Flop because of his unusually floppy ears.

Valerie Howells, 60, was looking after the one-year-old for friends when he was snatched by two masked thieves overnight.

The culprits were caught stealing Flop – who was born underweight and was underdeveloped – on CCTV.

Mrs Howells said she feared Flop may already be dead but said the family just “want him back”.

She said: “I’ve got a feeling he’s probably in the meat pot by now but he’s a pet.

The criminals were caught on CCTV sneaking onto Mrs Howell’s property in Rayleigh, Essex, in the early hours of Saturday morning.

The footage shows the pair – wearing hats and scarves to cover their faces – chasing the sheep around a field.

At one point, they both dive after one of the animals but it dodges their grasp and runs away.

Finally, the crooks corner Flop by a barn and can then be seen carrying him off over a fence.

Mrs Howells originally reared the Ryeland lamb Flop, who has his name because of his floppy ears, which are unusual for his breed.

However, she gave it to her friends as a pet because he was no good as a show animal. 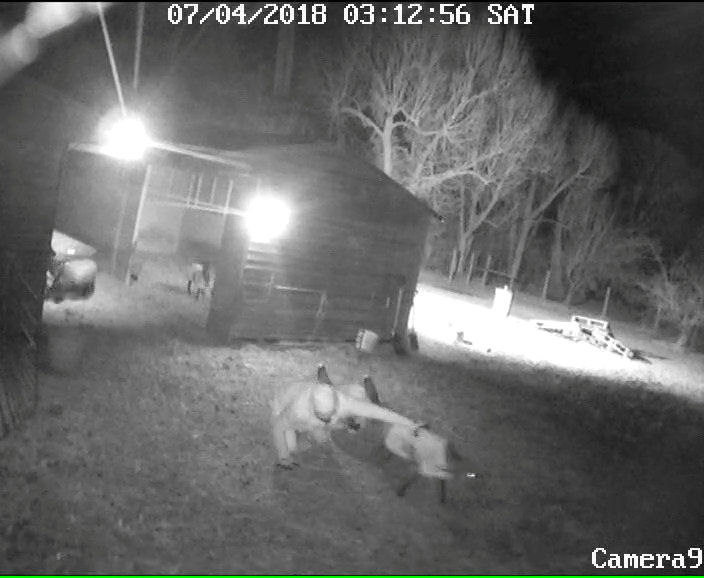 She said: “He was born quite late last year and it was his mum’s first time. You get some of them that don’t grow particularly well.

“He’s quite reserved in his nature. He didn’t want to go out and play with the other lambs.

“His mum really loved him, absolutely adored him.

“Wherever she went, he went. If he were in a playground he would be the one being bullied.”

Mrs Howells, who has nine breeding ewes, said: “I got up on Saturday morning and went to check on the lambs at about 8.30am because they are bottle fed.

“I went into the shelter and one of the hurdles I used as a gate was on the floor, the animals were a bit jumpy and spooked.

“I noticed Flop was gone, he’s a bit of a one for getting into places he shouldn’t and getting stuck.

“I looked and there was no sign at all, my gut feeling was someone had been in here.”

She then checked the CCTV footage.

Mrs Howells, who works as a dog warden, believes the pair were after animals that could be killed for meat because they ignored small lambs which were only two weeks old.

She added: “My friends who own him are devastated, he stays with me for the winter because their land is wet in winter. He was due to go back next week.

“He could be dead, he could be taken for meat. He is not a show lamb, he is much smaller than he should be and a funny little thing.

“He is no good for breeding because he has been castrated and has no other value than as a family pet.”

She has now invested in more security and has urged anyone with information to come forward.

Flop was wearing a winter coat when he was stolen at 3.10am on Saturday.

He is described as silver-coloured and has been ear tagged.

A spokesman for Essex Police said: “We are looking into the theft of livestock from Rayleigh.

“Damage was caused to lighting around the buildings prior to the theft. “ Call police on 101.