by Mark Cardwell
in News
0

Fraser the poodle who needs to go out in a full body suit due to an ailment called Sebaceous Adenitis, a rare type of inflammatory disease that affects the skin and glands of young and middle-aged dogs.

A dog which lost all his fur because of a rare genetic condition is once again “best in show” after having a specially made Burberry-style body suit.

Fraser, a four-year-old black Standard Poodle, went bald because of an ailment called Sebaceous Adenitis, a rare type of inflammatory disease that affects the skin and glands of young and middle-aged dogs.

But now he’s causing a stir in his home town of Cheadle, Staffs, after striding out in his new body suit made especially for him by Aileen Perry, 54, from Elgin, Scotland.

The suit has a beige, check pattern similar to the one used by the Burberry fashion house.

“He hates going out in the wet, I certainly wouldn’t like to go out with nothing on in this weather.

“Fraser got his new coat on Friday (21/9) and he causes a stir wherever he goes, especially with school children who laugh and say ‘look at that dog’.

“The Burberry pattern is his new winter coat, he’ll get a lighter weight one for the summer.

“When he goes out in the sun he has to have sun-cream out all over him to stop him getting burnt.

“He also has treatment from the vet but I’m sure, at the end of the day, he’ll go completely bald.

“But he’s really happy and enjoys just laying on the bed and staring out the window.

“He’s very playful but he just doesn’t like going out in the rain.

“Aileen’s company was something that I came across on the internet and she makes the suits made-to-measure, even the tail part fits perfectly.”

Aileen said: “Fraser’s such a bonny wee dog but he’d lost most of his lovely black hair and was thoroughly miserable with the cold and wet.

“I would normally help measure over either Facebook Messenger Video or Skype, but Elaine didn’t use them.

“I put out a plea for someone in the area who could go round and measure Fraser and someone else who could take their mobile device so I could help them over the internet.

“I had so many offers of help from complete dog-loving well-wishers.

“Ali Pope, a construction site manager, drove three-quarters of an hour and made a fabulous job of measuring Fraser.

“And Andy O’Brien, a retired fireman, spoke to me over Facebook and we got Fraser measured up perfectly.

“Even on the day it was delivered Ian Baddeley, an ambulance driver, who I’ve never met, arranged to go round with his wife Angela to ensure Elaine knew how to put the suit on.” 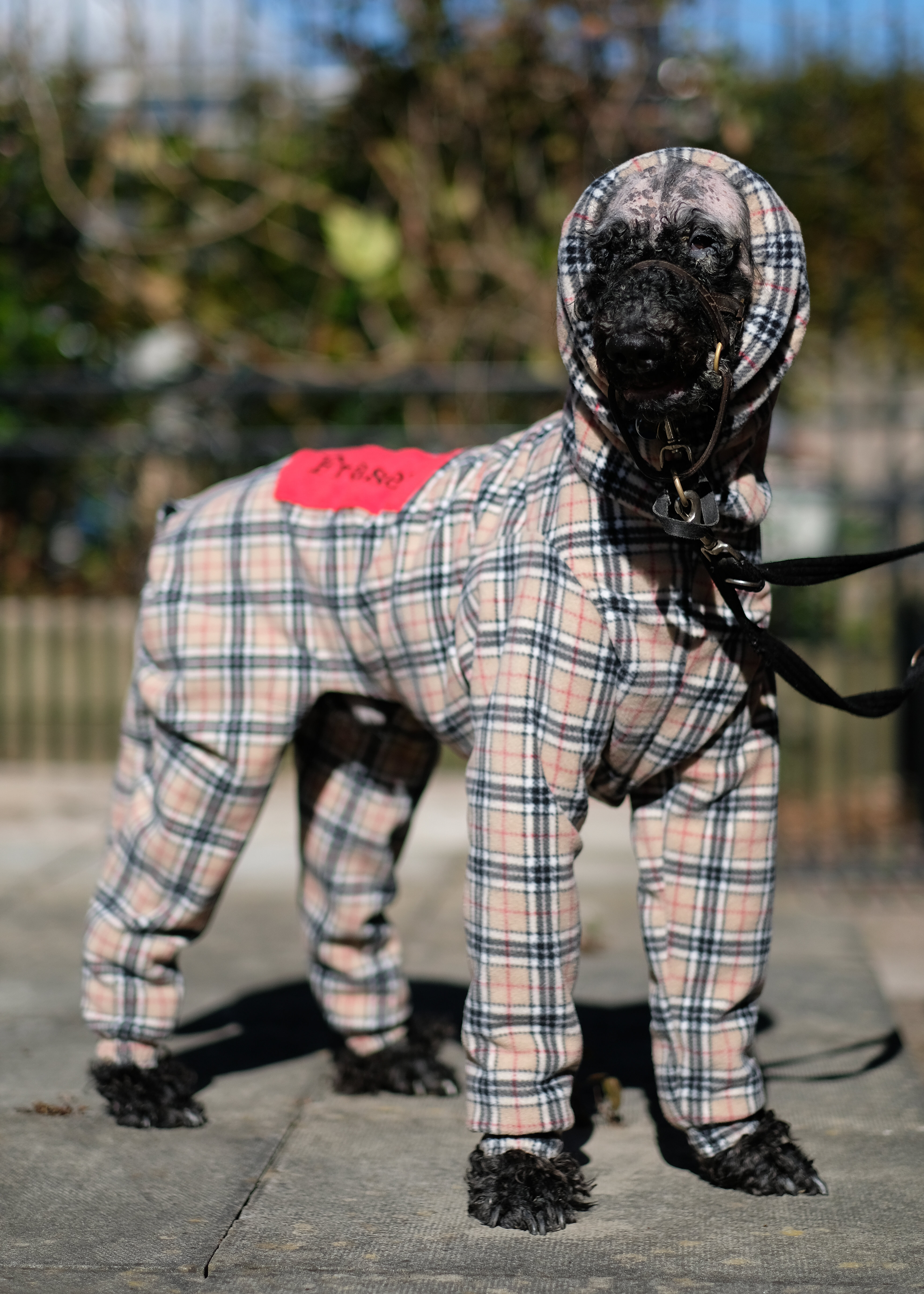 The former crown court shorthand writer started her firm, K9 CleanCoats (sic) seven years ago – after designing one for her American Cocker Spaniel, called Toto, to stop him getting dirty whenever he went out for a walk.

She can make up to two doggie suits a day and charges between £63 and £110 depending on the size of dog.

Aileen now exports them as far afield as Europe, America, Canada and Tasmania.