Jamie Mines with his daughters Savannah (left) and Isabella.

A dad who lost all his limbs in a electric shock has learned to look after himself and his twin girls after splitting from their mum – because he didn’t want to be a ”burden”.

Scaffolder Jamie Mines, 34, was thrown 13ft from a half-finished metal roof when 33,000 volts of electricity surged through a tin sheet he was holding.

But Jamie has revealed he has now amicably split from 26-year-old Harley and is living alone and regularly looks after the kids.

Despite his injuries the loving dad is thriving with his four prosthetic limbs, cleaning his home and cooking for himself and his daughters when they visit.

Jamie of Frome, Somerset, has claw hands on the ends of his prosthetic arms and says he “lives for” his visits from Savannah and Isabella.

He can even clamber up on to the low trampoline in his back garden to bounce with them.

Jamie has also learnt to drive thanks to a specially-adapted steering wheel fitted with a tetragrip lever, which accelerates when flicked up and reverses when flicked down.

He is using the gym everyday, is eyeing a return to football, and is aiming to be a Paralympic runner.

He has been living on his own since February this year, after parting amicably from Harley.

She remained by his bedside while he was placed in an induced coma for three weeks at Southmead Hospital, Bristol.

Jamie said: “We parted on good terms. I just didn’t want to be a burden – she had to deal with a lot, looking after me.”

Now, Jamie sees adorable Savannah and Isabella once a week for a day and overnight, and has thrown himself into fatherhood.

He said: “I’m getting fitter each day. I take the girls to the park when they’re here, or we’ll go to Longleat safari park.

“They like being outdoors, which can be hard for me, because I get tired very quickly.

“But I’ve started going to the gym for an hour every morning, trying to get my energy levels back up to how they were before the accident.”

Jamie has care staff visit twice a day, at 12pm and 6pm, to help him around the house – but he says he is able to do most things for himself.

He said: “I can cook for myself if it’s something that just needs to go on a baking tray in the oven, and I can boil veg and so on.

“I can pretty much do most things for myself – I can hoover the house, but the one thing I struggle with is dusting.”

He added: “I have dressed the girls before, but it takes me about an hour to do.

“So the carer helps me get them dressed and undressed, and helps with bathtimes and nappy changes and things like that.”

But, just like any other dad of toddlers, Jamie has no problems scooping Savannah and Isabella up in his arms, or putting them in their high-chairs and preparing an afternoon snack.

And outside of caring for his girls once a week, Jamie has big amibitions to get back into sport – and is working towards his ultimate goal of becoming a Paralympic runner.

He is awaiting the arrival of special running blade prosthetic legs to allow him to get back into one of his former favourite pasttimes.

Jamie, who had his final limb, his left leg, removed on July 4 last year, said: “I was up and about almost as soon as I had my second prosthetic leg fitted on August 20.

“I took to it straight away. I was a bit wobbly at first, but it only took me an hour so to get used to it.

“The mind is your only barrier. A lot of people who need amputations in adulthood are quite scared of adapting to losing a limb. But I wasn’t scared or anything.”

The determined former football striker now spends an hour each morning at the gym – and says he can use almost all the equipment, excpet the machine weights.

“I do 20 minutes cycling, and I also work out my shoulders, chest and back,” said Jamie.

“I also do a fair bit of hiking – I’ve walked up Cley Hill at Longleat a few times, and I do plan on walking up Snowdon at some point.

“Sports has been my life for such a long time. I’d like to be a Paralympic runner one day. I think now with Pistorius locked up, I could even win the gold,” Jamie joked. 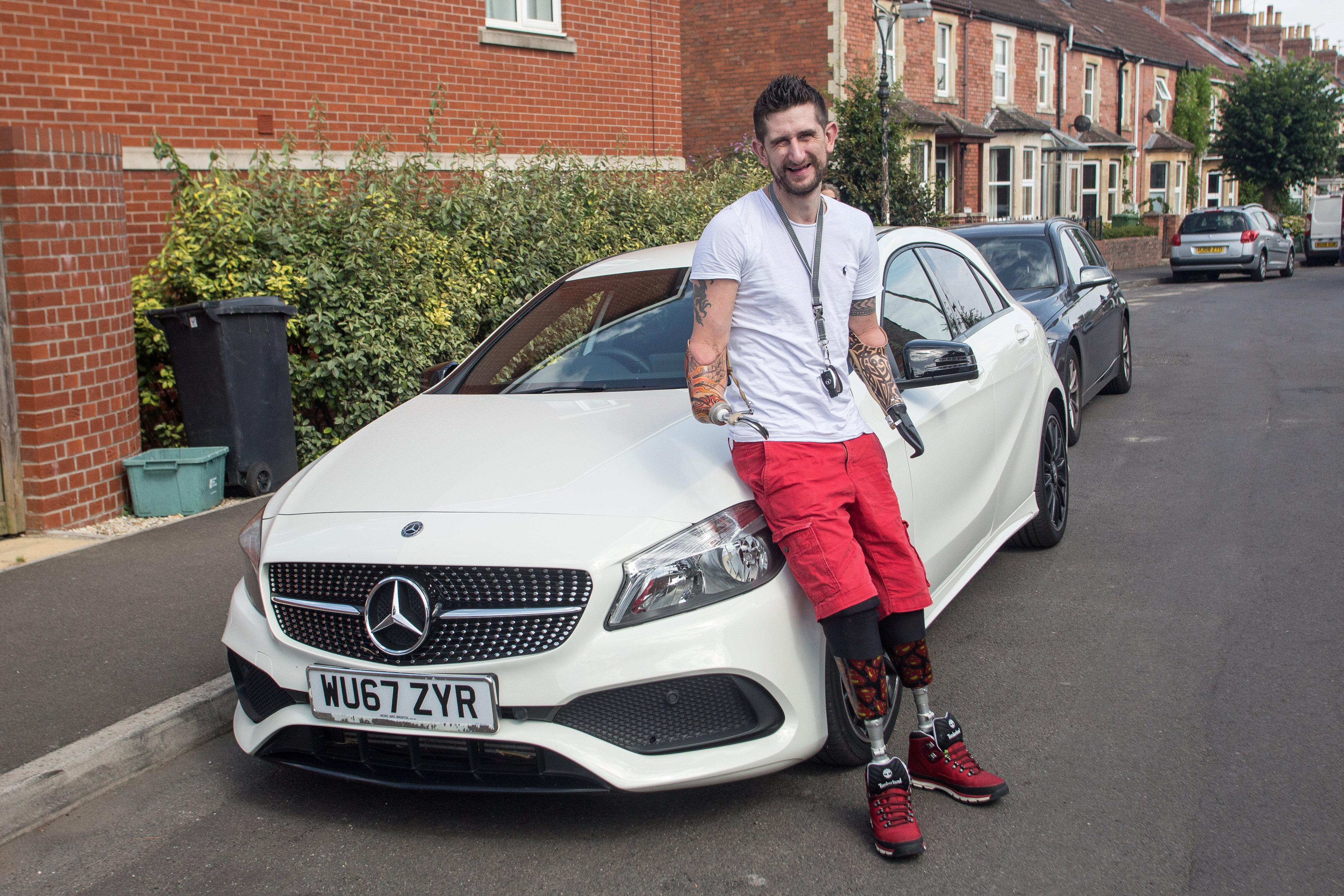 Jamie added that he has been driving since December 2017, and has driven 10,000 miles in the last eight months, saying: “It has massively changed my life.”

He is unsure whether he will return to the working world, but says he would like to dedicate hsome time to raising awareness for meningitis and sepsis.

He is also hoping to start volunteering for charity Special Effect, which helps people with disabilities to enjoy video games and screen time – by controlling the screen using their eyes.

Jamie himself needed an adapted Playstation controller and stylus for his phone, after he was brought round from his three-week induced coma.