Louis Georgiou from Altrincham, Cheshire, collects Transformers toys and keeps the thousands that he owns in his office space in Manchester city centre.

Meet the dad who bought a Transformers figure for his son’s third birthday – and now has the biggest collection in the WORLD.

Louis Georgoui, 43, started his collection in 2011 when he bought a Dinobot figurine for his son Lucas, now ten.

When his son unwrapped the gift, childhood memories of the cartoon robot series came flooding back and Louis started buying all the memorabilia he could find.

Seven years on he’s got the world’s largest collection of Transformers memorabilia – a £40,000 treasure trove of 2,037 comics, figures and collectors items.

He owns a fifth of the world’s entire collectable Transformers memorabilia.

The collection is so big he’s moved it out of his six-bed semi-detached home and into a meeting room at his office.

The sci-fi fanatic, of Altrincham, south Manchester, said: “It all started when my son was three-years-old and I was looking for a Christmas present.

“I bought him a figure from the Transformer animated series, a Dinobot, a Grimlock, a Starscream.

“When he unwrapped them it was nostalgic as I was into the Transformers as a child.

“Before I knew it I was buying more and more.

“There’s around 10,000 collectors items worldwide so I have a fair chunk.

“My favourite figure funnily enough isn’t actually an official Transformers figure but from a third party company which makes high quality versions of them. The one I like is Leonidas based on the original ‘Lio Convoy’ figure.

“A low point was missing out on a £8,000 eBay bid on an unreleased prototype of Generation 2 Menasor.

“My best bargain was accidental. I bought a £30 Japanese ‘Breakdown’ figure from the “Transformers Prime series which is now selling for $500 (£370).

“I did actually get my son into it. He has his own collection but they’re more toys than collectables.

“Growing up he pestered me into getting some out of the box to play with but I always had to tell him no.” 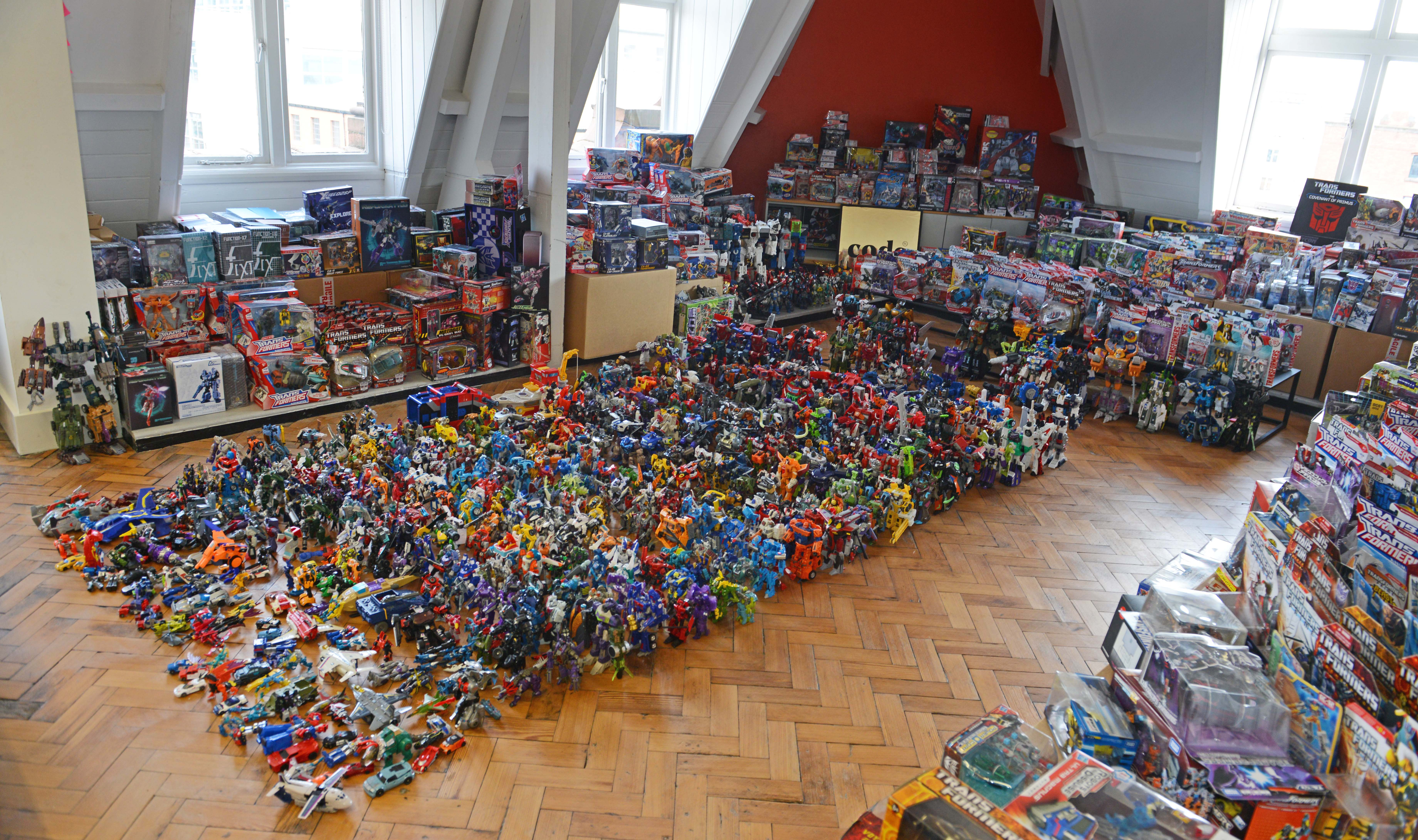 His collection is said to be so overwhelming housewife Faye, 42, fears she would be left with the daunting task of looking after the collection if Louis died.

His most expensive item is a £500 Lio Prime figure.

Louis, head of a digital company, also owns a bunch of rare Japanese figurines including Star Sabre and Victory Leo.

He is now pinning his hopes on becoming the Guinness World Record holder for Transformers memorabilia.

He added: “My wife has wanted them out for ages.

“In arguments she would threaten to shove them all in a black sack and send them off to the skip.

“She even admitted that her biggest fear would be for me to suddenly die and for her to be left to deal with the collection.

“I shifted them all out of my house six months ago and delivered them to the office.

“They are now all out on display in a meeting room.

“All the staff have had a look and when have meetings it becomes like a museum.

“My goal is to get into to the book of Guinness World Records then I’ll stop collecting.

“I was then thinking about selling them off but my brother-in-law who is lives in Hong Kong said the collection would go down well over there.

“So I might look into shipping them over and going on tour over there.

“I’ll keep a few of my favourites and then I will probably look to selling them off.”

Last year AJ Ard from Eastvale, California made a bid for the world’s largest collection of Transformers items with 1,313 items.