Lina Evangelou and her husband Michael

A couple who met via a text message sent to the wrong number fell in love after they got chatting – and got married three months later.

In what sounds like the plot of a Hollywood rom-com, Michael Evangelou mistakenly sent a two-word text to a complete stranger, Lina Dahlbeck.

She cheerfully replied that he had the wrong number and started exchanging jokey messages that became increasingly flirty.

They decided to meet up and instantly hit it off – and after a three-month whirlwind romance they tied the knot and are planning a new life together in Dubai.

Lina, 37, of Morden, South London, said: “If someone told me I would meet my future husband when he sent me a text out of the blue, I would never have believed them.

“People are astonished every time I tell them how we met.

“Some of my friends have even started sending Whatsapp messages to random numbers in the hope of finding romance.”

Car salesman Michael, 44, of from Colliers Wood in south London, added: “It’s certainly a crazy way to meet someone. Everything snowballed but in a good way.

“She’s the woman I want to spend the rest of my life with.”

The message that brought the pair together last September simply said “Girls trip”.

Michael, from Colliers Wood in south London, thought he was texting his own number and wanted to remind himself to see Girls Trip, a film starring Queen Latifah.

Makeup artist Lina replied: “Hi! Girls trip? Who’s this please? I’m guessing this was intended for another Lina” and added a wink-face emoji. 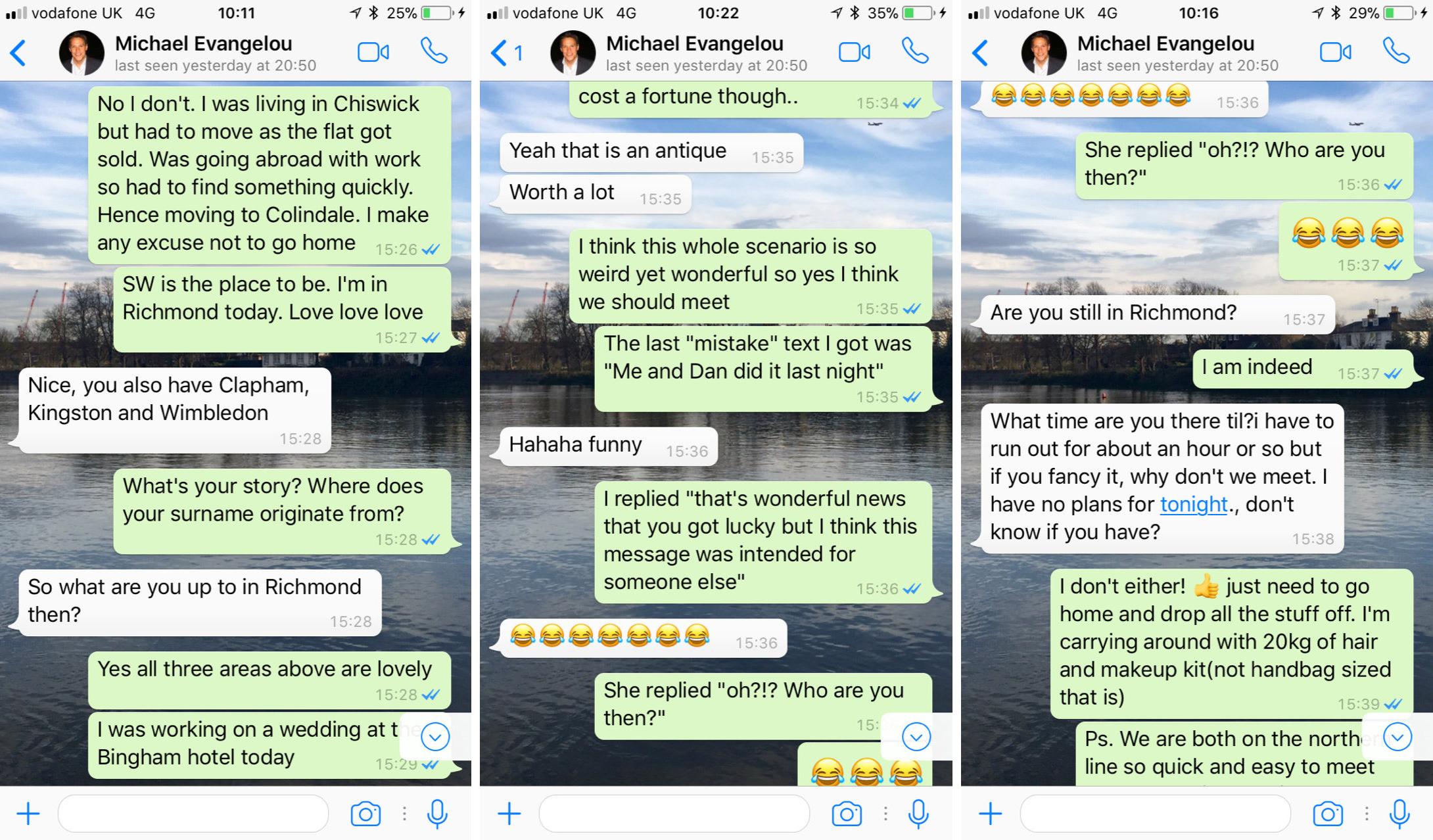 Michael quickly explained his mistake and asked if they knew each other.

He wrote: “Haha sorry I thought I was sending it to my own number… It’s Michael Evangelou, don’t know how your number got stored under mine Lina. Do you know me?”

The couple realised they had never met, but kept messaging.

Lina said: “We started chatting back and forth. I think if I wasn’t single I wouldn’t have continued the chat.” 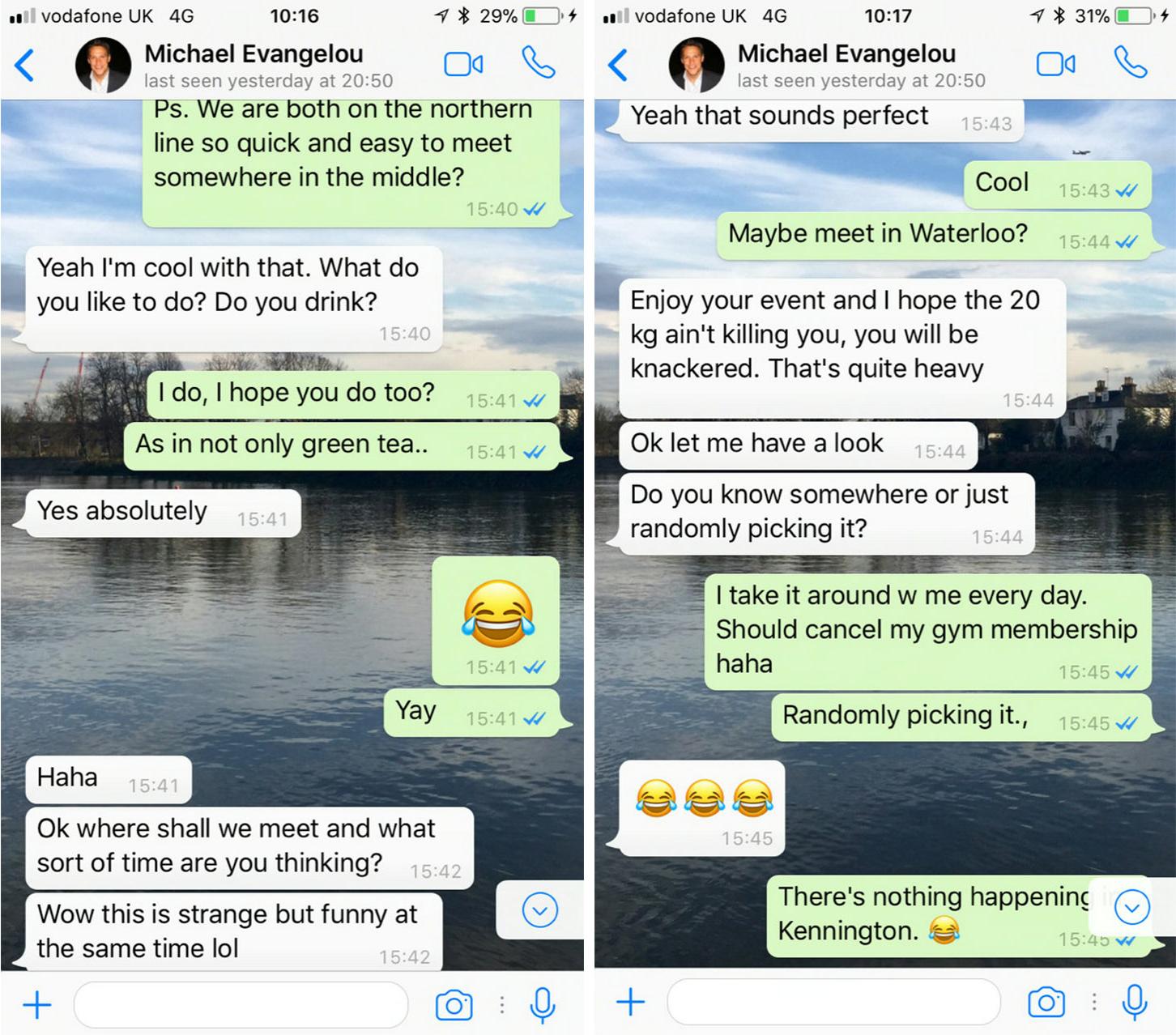 As their messages took on a flirty tone, Michael suggested they meet up for a drink that same night. Lina was quick to agree.

She wrote: “I think this whole scenario is so weird yet wonderful so yes I think we should meet.”

Lina admitted that it wasn’t exactly a blind date as she sneaked a peek at Michael’s profile picture on the messaging site.

She said: “I had checked the picture on his WhatsApp profile and he was attractive.”

Michael added: “Once our conversation on WhatsApp started flowing, I asked Lina for a picture.

“I looked at her profile picture and she was so good looking, my first thought was: ‘is this a catfish situation?’

“So I sent her a picture of myself and said: ‘Do you have any recent pictures?’

“She sent me one of herself two weeks before in Sweden. I thought: ‘Ooh, she’s quite nice’.

“I asked her out for a drink and the rest is history.”

They met for a drink at a Latin American restaurant in Waterloo just four hours after Michael sent the WhatsApp message.

Lina was blown away by the hunky, half Greek, car salesman.

She said: “He was so attractive. He talked a lot but I realised it was because he was nervous. It was really adorable.

“He was outgoing, bubbly and positive.

“We were both so puzzled by the whole thing – we were on a date just four hours after that WhatsApp message.

“We were convinced it was fate that had brought us together.”

The couple left the restaurant and went on to Trishas, a bar in Soho.

Lina said: “Michael told everyone at the bar that night how we met and everyone’s jaws dropped.

“We kissed that night and the next day we met up for brunch. We haven’t been apart since.

“We were immediately a couple. It felt so natural – as though we had always known each other.”

Lina confessed that after six years of the single life, she had given up hope of ever finding a lasting relationship.

She said: “My last relationship ended in 2011. Both Michael and I had been single for years.

“We had tried everything – setups, blind dates and online dating. Nothing worked.

“We had given up. We thought it wasn’t going to happen for us.”

Lina said: “We were talking about our dreams and I said I had always wanted to live in Dubai.

“Michael said: ‘Let’s do it, let’s move there together.’

“I explained that it was a Muslim country so we would have to be married to live together.

“I thought: ‘Is that a proposal?’ I asked him if he was serious and he assured me that he was.

“Even though we were just sitting at home with the television on, it felt romantic.

“I knew I wanted to marry him.”

Michael explained: “It seemed crazy but the way we met was crazy – everything fell into place.

“Two previous girlfriends had asked me to marry them but I had said no.

“I wouldn’t do something that felt wrong but with Lina it was natural.

“It was like we had known each other for years.”

The couple’s friends and family had mixed reactions to the happy news.

Lina said: “Most of our friends thought we were a bit nuts but they agreed that if it’s right you know and there are no guarantees in this life.

“My parents and Michael’s parents were delighted.

“I had already met his mum but because my parents live in Sweden, they didn’t meet Michael until the day before the wedding.

“They were happy for us – they did think it was quick but they didn’t question it.”

Lina worked flat out to plan the perfect non-traditional wedding in record time.

She said: “As a makeup artist, I have done over 200 weddings so I had a clear idea of what I didn’t want.

“I’m not traditional – I didn’t want a first dance or something borrowed, something blue.

“We wanted a very small and intimate wedding for our friends and family – nothing bling.”

The couple tied the knot in a romantic ceremony at Morden Park House on 7 December in front of 30 guests with Lina wearing a delicate white fishtail gown.

As a married couple, Lina and Michael enjoy sharing their ‘how we met’ story with friends.

In March, the couple will jet off to Dubai where Lina will launch a makeup school.

They also hope to start a family in the luxurious city.

Lina said: “We definitely want to have children now. Bring it on!

“I want three kids and Michael wants two so we’ll see what happens.”

Sometimes Lina still wonders what might have happened if Michael never sent a message to remind himself to watch a film.

She said: “I had given up on love and then Michael sent that message and literally landed in my life.

“My story gives hope to everyone: never give up!

“He’s my dream man and it’s destiny. The universe had something to do with this for sure.”