A ceiling collapsed in a pensioner's new home while she was on holiday leaving debris and planks of wood scattered across the floor.

A pensioner is distraught after returning home from holiday, only to find her ceiling had COLLAPSED.

Audrey Adu has been living in her housing association owned home for around two years when the roof suddenly caved in.

The 72-year-old was on holiday in Switzerland over Christmas visiting family when disaster struck.

A friend of Audrey’s who collects her mail phoned to deliver the devastating news.

Since returning home on January 12, Audrey from Hornsey, north London, has been living with her daughter, Jennifer, as she is too afraid to return to the ground floor converted flat.

But this week had to return to the flat despite it still suffering from damage and a strong smell of damp.

This is not the first problem Audrey has had to overcome with her L&Q housing association home.

When she moved in in July 2015 she found it unfinished and with damp floors and Audrey stayed in a hotel in the first month of 2016 while repairs were carried out.

At the time L&Q offered Audrey a tenth floor flat in Muswell Hill, north London, which was unsuitable because she walks with a stick and is vulnerable.

Audrey said: “I was lucky I was away when it happened or I could have been injured or even died.

“It’s awful. There’s a big hole in the kitchen where the ceiling collapsed and there’s dampness.

“There was debris everywhere when I first got back. It’s absolutely horrible

“It’s made me very depressed and I’m frightened to go into the kitchen in case another bit of the ceiling falls down on me.

“I haven’t been eating. I’ve told L&Q that I’m scared and that I want them to move me from here. I want to move out, I don’t know what to do.” 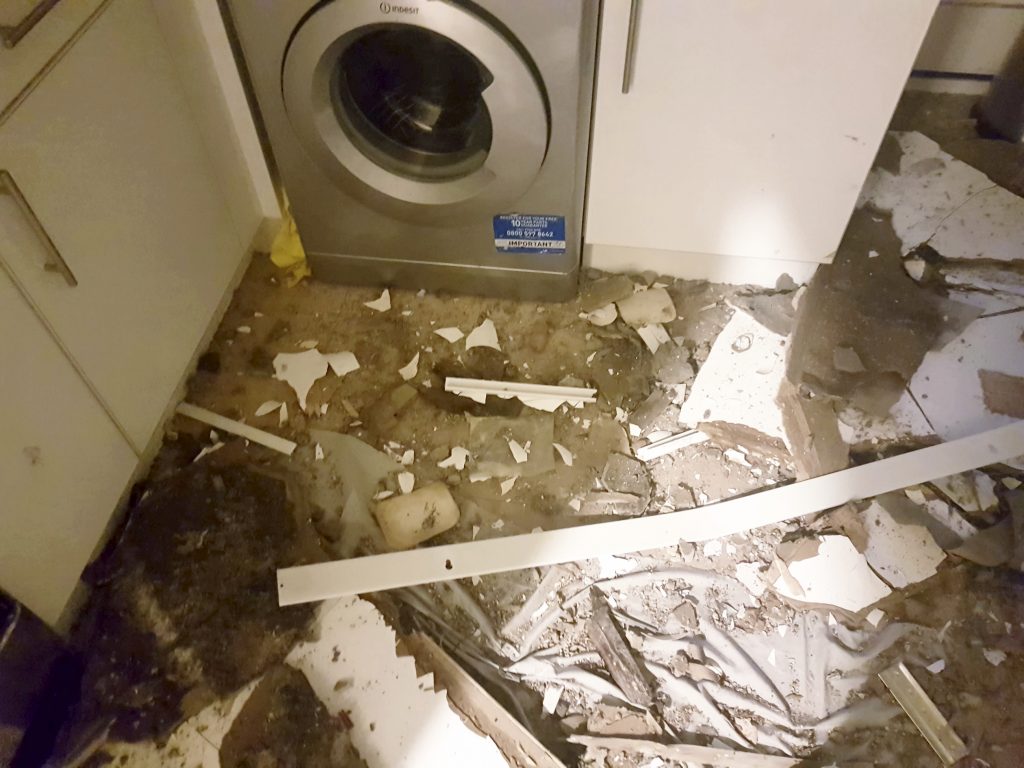 Jennifer said there had been a lot of problems with damp in the flat and water leaking into the kitchen and hallway.

She added: “There’s just been so many issues with damp and this landlord has not done anything.

“Just before she went away my mum said there was a stench and there was water coming from the ceiling in the kitchen.

“The condition of the flat is nice to look at but there’s so many defects that are just glossed over and left to get worse.”

A L&Q spokesman apologised for the collapsed ceiling.

He said: “I’d like to apologise to Ms Adu for the recent collapse of her ceiling.

“As soon as we were made aware of the situation, we were able to urgently attend the property to make it safe and clear debris.

“We have now agreed the necessary works to renew the ceiling with Ms Adu, which will take place this week.”

Workman arrived at the flat on last Thursday to re-plaster the collapsed ceiling but Audrey says a surveyor has still not be round to check the damp in the rest of the hall.

What Families Look For When Choosing A Hospital

The Perfect Handbook For Opening A Business Bank Account

What Families Look For When Choosing A Hospital

The Perfect Handbook For Opening A Business Bank Account