This is the shocking moment a 12-year-old girl was robbed on Cambridge Street, Derby, in broad daylight by a European thug who wrestled her to the ground before stealing her mobile phone

This is the shocking moment a 12-year-old girl was robbed in broad daylight by a European thug who wrestled her to the ground before stealing her mobile phone.

Harrowing CCTV footage captured the yob, wearing a purple-coloured tracksuit, walking down the street before suddenly turning back and grabbing the youngster.

The crook, described as having a ‘European accent’ and aged between 16-19, is seen hurling the girl to the ground before snatching her rose gold iPhone 6s.

The girl, who was wearing duffle coat with the hood up, bravely fought back but the thug managed to overpower her before he calmly walked away. 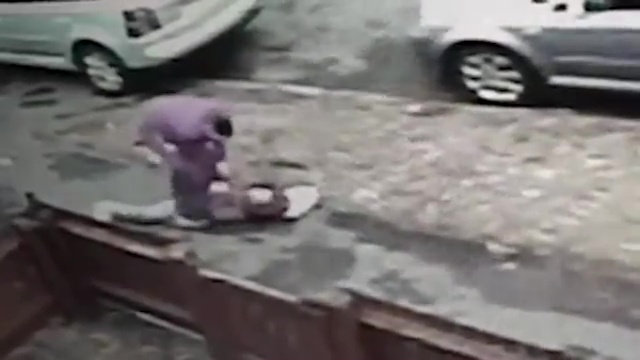 The girl had just been to the local shops to run an errand for her mum before she was attacked on Sunday (18/2) at 4.40pm on Cambridge Street, Derby.

“I realise that the quality is not the best but we have released it quickly in the hope that someone will recognise the man.

“The 12-year-old victim has been very brave but was attacked for apparently no other reason than to steal her phone, a rose gold iPhone 6s.

“I would urge anyone who knows the man or has been offered such a phone for sale since yesterday to make contact with us as soon as possible.”

The robber is described as white/tanned, about 5ft 6ins tall, slim build and spoke with a ‘European accent’.

His hair is described as black and being in a V-shape at the back, shaved at the sides and longer on top.