Burlesque dancer is still performing despite being 37 weeks pregnant

Tuesday Laveau, who is 37 weeks pregnant - and is still working as a burlesque dancer.

A burlesque dancer is still performing her act and even wearing massive heels – despite being 37 weeks pregnant.

Tuesday Laveau, 37, is expecting her first child with husband Graeme, 36, and carried on entertaining well into her term.

But she had to give up bumping and grinding due to her changing body shape.

Tuesday did the last show before her due date at the Smoke and Mirrors in Bristol, where she hosts a regular night, Coochie Crunch.

She stripped off to The Ronettes’ hit Be My Baby, and revealed a giant painted flower painted on her bump and matching nipple tassels.

Tuesday who is due on May 11 said: “Pregnancy is a normal part of being a mammal.

“As women we are just told there are things we should do or not to do, and I feel like burlesque is sticking a finger to that.

“I think we are shaking off the shackles of body image.”

She said she could feel the baby kicking after the performance, and added: “I’ve been very lucky, I found pregnancy very easy breezy.

“I’ve been able to keep going.

“I love what I do and it is such a big part of me that it is something I would struggle to give up before I had to.”

Tuesday had to make her own costumes as her bump grew bigger, and says she had never watched a burlesque performance with a pregnant dancer before.

She said: “At the moment I can’t really fit into anything.

“I did well for the first five or six months but I had to make some new costumes for the rest of the time.

“I make the costumes myself, including my own g-strings.

“I usually wear stripper heels as they’re a dream to dance in but I’ve gone down from seven inches to six inches.”

Due to her restricted mobility, Tuesday had to use her imagination to adapt her routine – including cradling her bump as she danced on stage.

Tuesday added: “I had to adapt the show quite a lot.

“I’d normally do a lot of floor work and wear big shoes and bang around.

“I can get down on the floor but I can’t get back up.”

The audience for her final performance was overwhelmingly female, and Tuesday said she had been overwhelmed by the support she had been shown.

“I don’t think anyone was surprised that I carried on performing, but I have been touched,” Tuesday said. 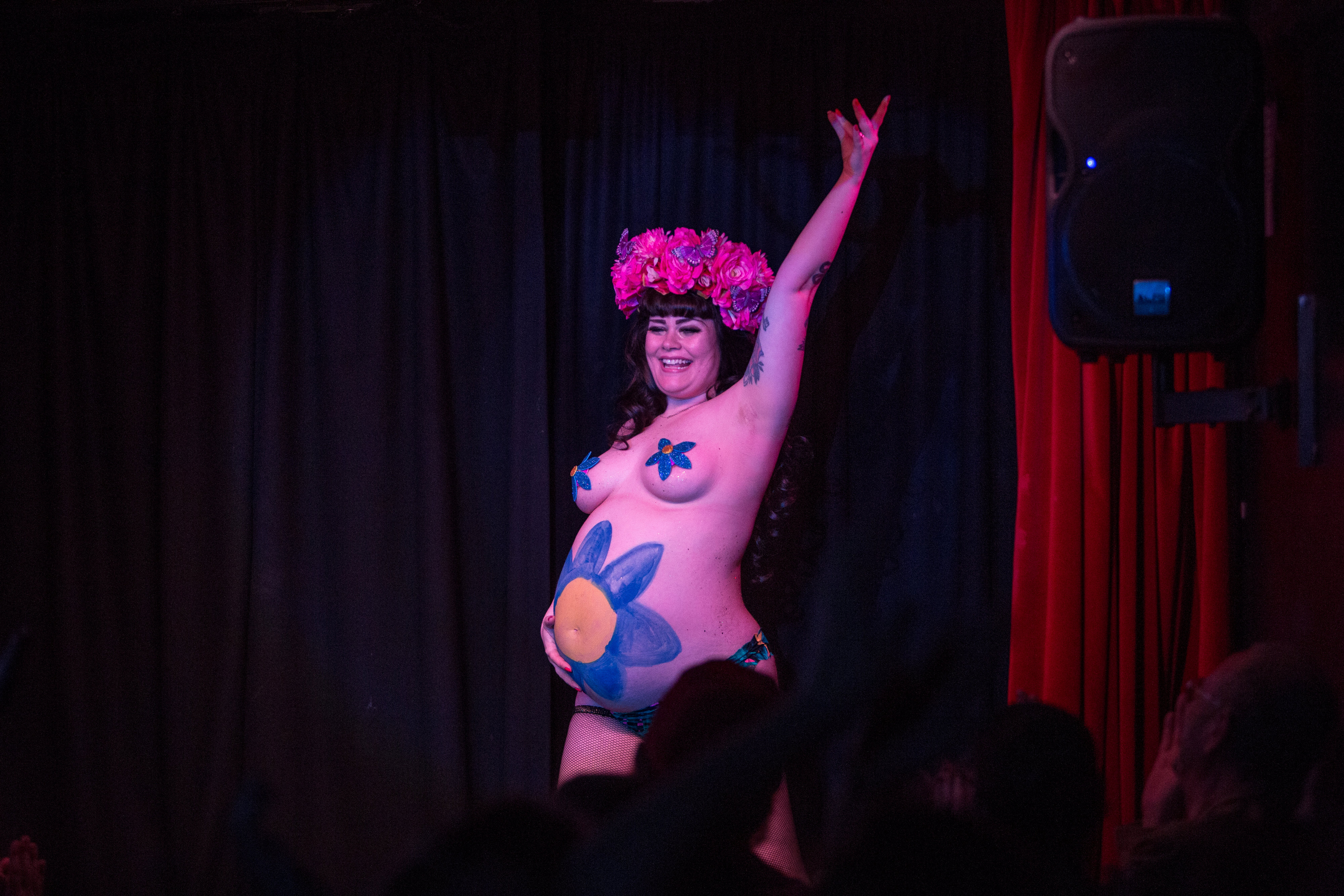 “I’ve had regular audience members telling me how pleased they are for me and my husband.

“I think he would have been surprised if I had stopped.”

Her next performance will be in September.

Tuesday said: “It has been really fun and it has been a good challenge. I’ve had an amazing response.

“I’ve had so many women coming up to me afterwards.

“I have had so many women come up afterwards, they seem to feel all kinds of things.”

“You Can’t Play Football, You’re A Girl”: Six-year-old has beaten bullies by leading out England Women for World Cup qualifier

"You Can't Play Football, You're A Girl”: Six-year-old has beaten bullies by leading out England Women for World Cup qualifier