A coach driver has been suspended after being caught on camera trying to DRAG a woman off his coach despite her having a valid ticket.

A coach driver is facing the sack after he was filmed trying to drag a French woman off his vehicle by her legs – despite her having a valid ticket.

Mobile footage filmed by another passenger captured the moment the National Express driver hauled the woman down the steps of the coach.

As shocked passengers confront him, the driver walks past the woman to his seat and eventually allowed her to continue on her journey.

The incident took place as the woman, who spoke in French and was in her 30s, rode on the number 310 from Nottingham to Poole at around 10am on Wednesday (14/2).

The driver flipped when the woman put her bike in the luggage compartment of the coach and struggled to load her e-ticket on her mobile phone.

The driver was overheard telling her the ticket was invalid – despite them being valid if shown to the driver on electronic devices.

But fast-thinking onlookers called the company’s head office – and the driver was replaced when the coach pulled over in Birmingham.

Saul Morgan, 37, captured the altercation on his phone while waiting for a bus to London.

The photographer, from Carlton, Nottingham, said: “I was waiting for my bus and as I stood there the lady in question arrived shortly after.

“She had a pushbike wrapped up in a couple of black (bin) liners.

“She asked the driver if this was the right bus.

“The driver was quite rude anyway, he had been rude to a few people beforehand. 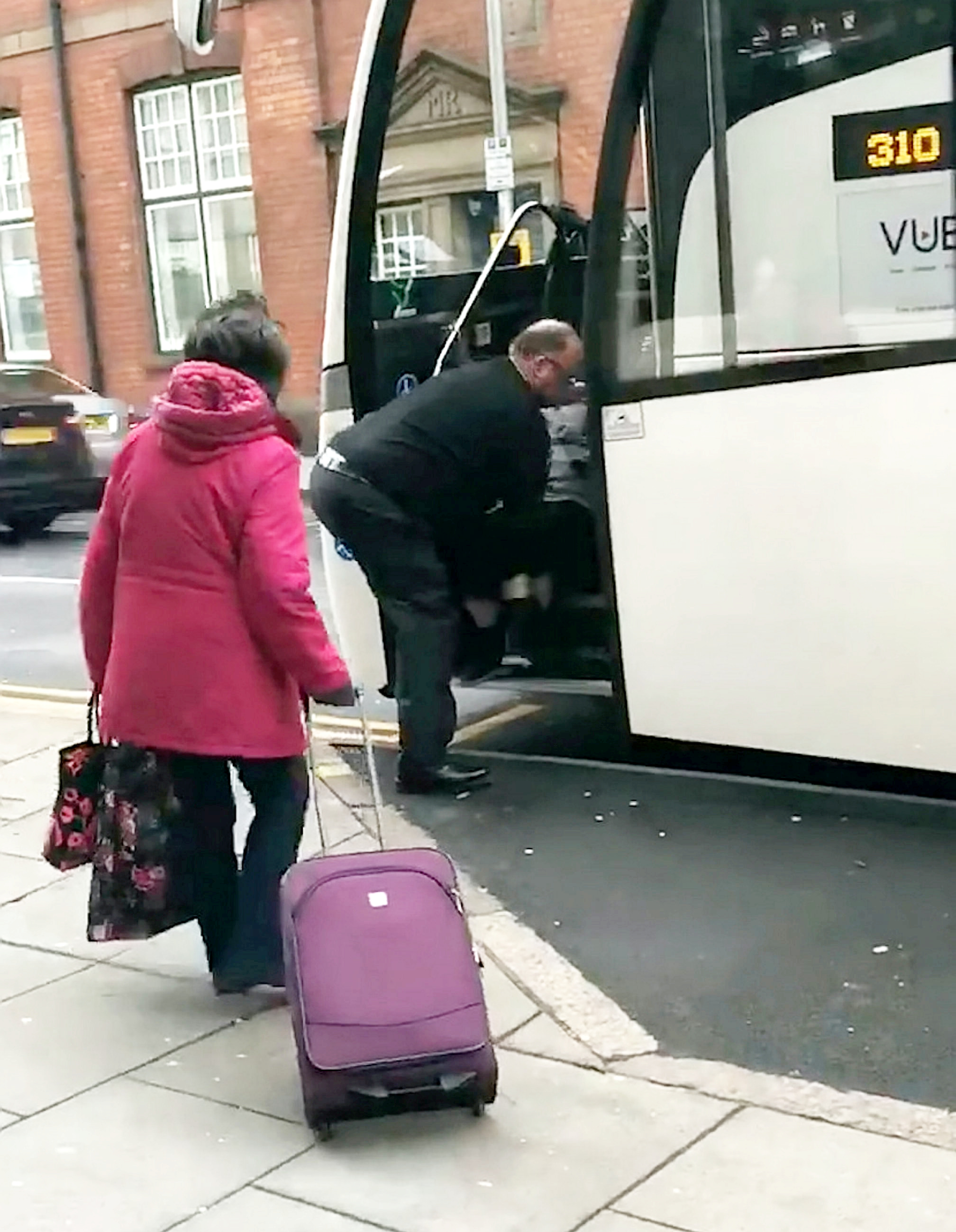 “She loaded her bike on – as he loaded it came charging aback at her shouting, ‘you can’t put that on there until you’ve shown your ticket.’

“She stopped what she was doing, the bike was half-on half-off.

“She pulled her phone out and there was a delay in her pulling up her ticket.

“He wouldn’t wait for her, he said, ‘you haven’t got a ticket, get your bike off, I’m going, I haven’t got time for this.’

“She showed her phone and said, ‘I’ve got a ticket.’

“At this point he pulled her bike off and threw it on the kerb, he walked off to the front and she followed him saying, ‘I’ve got a ticket.’

“He wouldn’t look at it. He got on and tried to shut the door on her about four times.

“On the last one it opened fully and she threw herself on the floor in the stairwell.

“He grabbed her foot and was dragging her off. 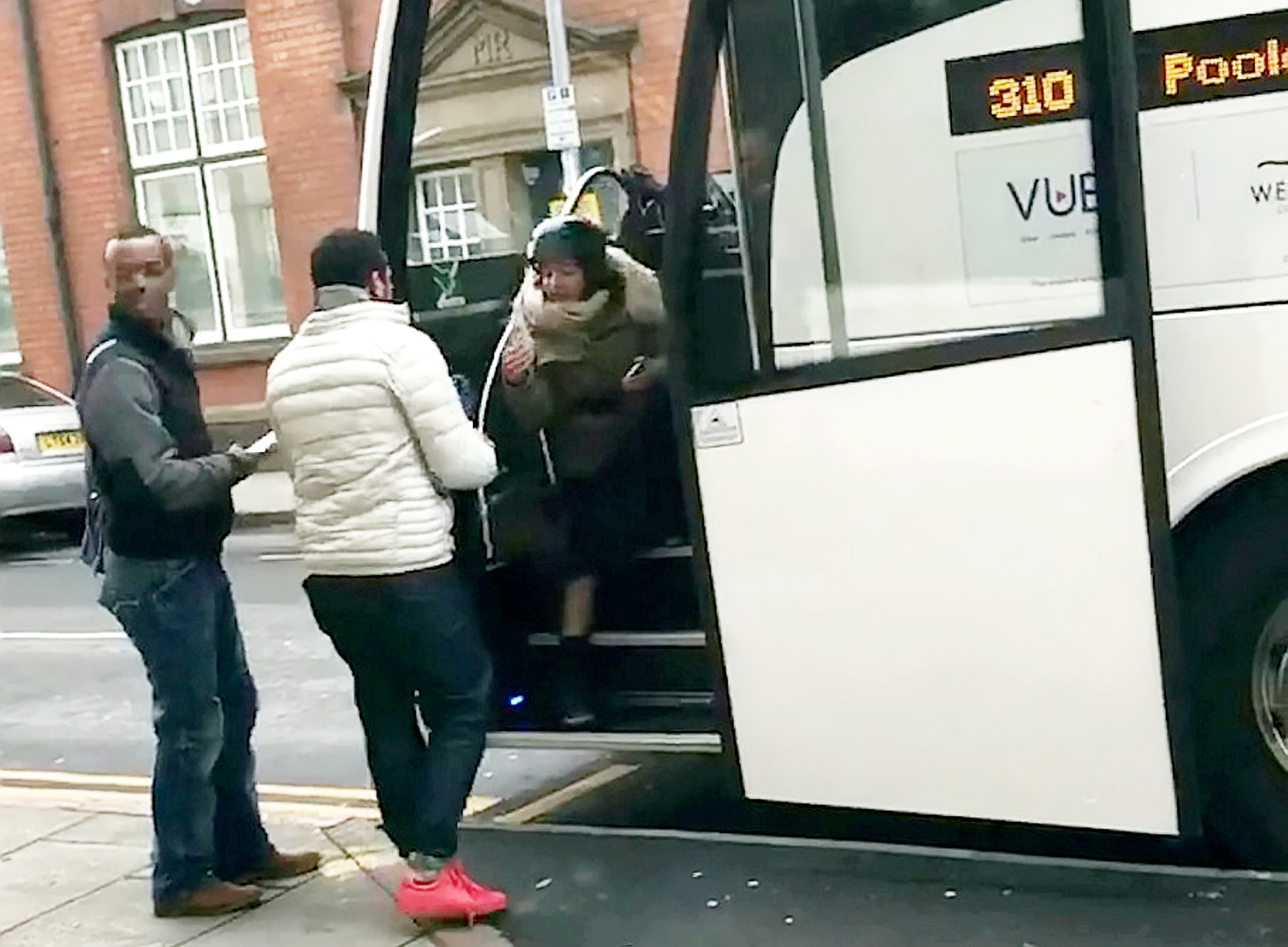 “There was two guys and a woman stood next to me, they went over to confront him.

“He had a crowd of people stood round and we said we all have e-tickets.

“It was a turnaround of events, he put her bike on, he was still laying into her saying, ‘next time print your ticket.’

“She was in bits, she was absolutely distraught.

“I can still hear the screams now.

“It was absolutely awful, so unnecessary.

“It just spiralled out of all control.

“It was absolutely shocking.

“National Express dealt with it amazingly.

“Within 20 minutes they were getting the details and they pulled the bus in Birmingham and took the driver off the bus and looked after the girl.

“I said my main concern is that the woman has been assaulted and is having to go on a bus with him down to Poole.

“It was so out of order, he didn’t want to help or do anything.

“All he wanted to do was get on his bus and drive off and leave her and she absolutely fought.

“It wasn’t till we gathered round with our e-tickets and he backtracked.

“Before I filmed he had pushed her away so she couldn’t get her hand in when he tried to close the door three or four times.

“He came across he was trying to intimidate her, almost like a jobsworth.

“She had a helmet on throughout the whole thing which is probably a blessing in disguise.”

“Show this e-Ticket to your driver on either your smartphone or tablet.

“You can also print a copy using the ‘Printer Friendly Ticket’ button above.

“You must be able to produce a valid ticket for travel upon request.”

A National Express spokesman said: “We apologise for the actions of our driver, which clearly fell far below the professional standards expected of all our staff.

“The driver involved has been removed from service and suspended pending an urgent investigation.

“We have spoken to and apologised to the customer involved.”