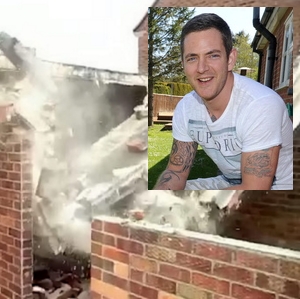 This is the dramatic moment a builder bricked it after being crushed under 15 TONNES of rubble as he demolished a garage.

Jake Weir, 33, was knocking down the building to make way for an extension when the garage roof suddenly collapsed.

The shocking accident, which was filmed by the homeowner, showed the dad-of-two get buried under tonnes of bricks as the supporting wall fell on top of him.

Friends managed to dig Jake out of the wreckage and he was rushed to hospital with his left leg hanging from a strand of skin.

He underwent a six-hour operation, where surgeons drilled metal pins into the ligaments and tendons in his shredded limb.

Incredibly, less than 12 months after the horror accident which happened in June last year, Jake is back on his feet and has just gone back to work.

Jake, a former paratrooper, said: “I remember the wall exploding and hitting me in the face.

“I was still conscious and I looked up and thought I’ve got to get out of here.

“I thought I was going to die, but when I saw the dust settle on the bricks and realised I was still alive my adrenaline kicked in and I started to drag myself out of the mess.

“I pulled myself from the rubble and looked down to see my legs in knots.

“I couldn’t feel any pain though – it was a strange sensation, I was just numb.

“My leg was hanging off basically.

“It was certainly a wake-up call which makes you put your life in perspective.

“I don’t watch the video any more. Psychologically I’ve had to deal with what happened to me and it’s taken some time.

“I did used to get flashbacks, but I’m thankful I can now see the funny side.

Jake was demolishing a garage in Spalding, Lincs., last June when the roof suddenly smashed to the ground bringing the wall toppling down on him.

After being dragged from the rubble, Jake was rushed to Nottingham’s Queens Medical Centre where doctors told him he would probably need his leg amputated.

Amazingly, two weeks later Jake walked out of hospital and now he is back at work.

Jake lives with his wife, Amanda-Jane Weir, 40, a NHS manager, and their seven-year-old son Morgan, in Spalding, Lincs.

He added: “It’s a job which I’d done before, and when you are demolishing things often people want to take pictures or videos of the moment.

“That’s how my accident came to be caught on video.

“When I first saw the video it was very difficult to watch.

“I don’t watch the video any more, I’ve had to deal with what happened to me.

“I’ve had flashbacks of that moment, it still haunts me.

“I can’t get over what’s happened.”

Professor Moran, who has been a consultant at the Queen’s Medical Centre for 20 years, said his injuries were like to those often seen by high-speed motorbike crashes.

He said: “When I first saw him, his type of injury was as severe as it could be, without having to be amputated.

“I’ve never known someone recover as quickly from such an injury as Jake.

“He has worked very hard at his recovery and deserves a lot of credit for that.

“His injuries were too severe for hospitals in Lincolnshire to handle, and it in the immediate aftermath of the accident that medics told him his chances of retaining his injured leg were slim.”

Wild boars are getting brave and venturing out to wreak havoc...

Man Arrested On Suspicion Of Murder As Woman Was Found Stabbed...