Conan Andrews, 9, draws a sketch of his home town of Brighton, East Sussex.

A budding artist can recreate intricate land and cityscapes from memory at just nine years old – after looking at the original for only two minutes.

Conan Andrews, nine, is so extraordinary at art he can sketch a scene in incredible detail after seeing it just once for a few brief moments.

The little lad is one of a few people in the UK to be diagnosed as an autistic savant, like internationally acclaimed artist Stephen Wiltshire.

“I haven’t seen anything else like it, it is quite phenomenal.

“We went to America for Christmas and stayed in an apartment with a view of the skyline.

“Conan came down and drew the whole thing from memory within two minutes, it was absolutely amazing.

“I thought how the hell did he do that?”

Conan began drawing two years ago and had his first exhibition that year when his work was put on display at a gallery in his home city of Brighton, East Sussex.

He was diagnosed with high functioning autism in February and is one of only two autistic savants in Brighton, where he lives with mum Jonesta, dad Anthony, 37, and his two sisters aged two and 11.

Jonesta, a children’s entertainer, said: “Conan’s autism is sensory and his anxiety comes out in his behaviour.

“If he doesn’t express himself, he can explode with the frustration.

“That is why he draws, to reset his body and calm himself down.”

Conan watches online art tutorials and researches different techniques to develop his skills and has also experimented with painting and sculpturing, but mum Jonesta said he is best with a fine pen and paper where he can capture the most detail.

She said: “Once he said I want to draw some boats down at the seafront.

“He put his finger up to check the size of the buildings and he said he learned it from YouTube.

“You can’t train or teach him. It is a natural gift.”

The self-taught artist becomes ‘obsessed’ with particular subjects which he researches at length and is currently focused on World War I and II, the Civil War and Vietnam War. 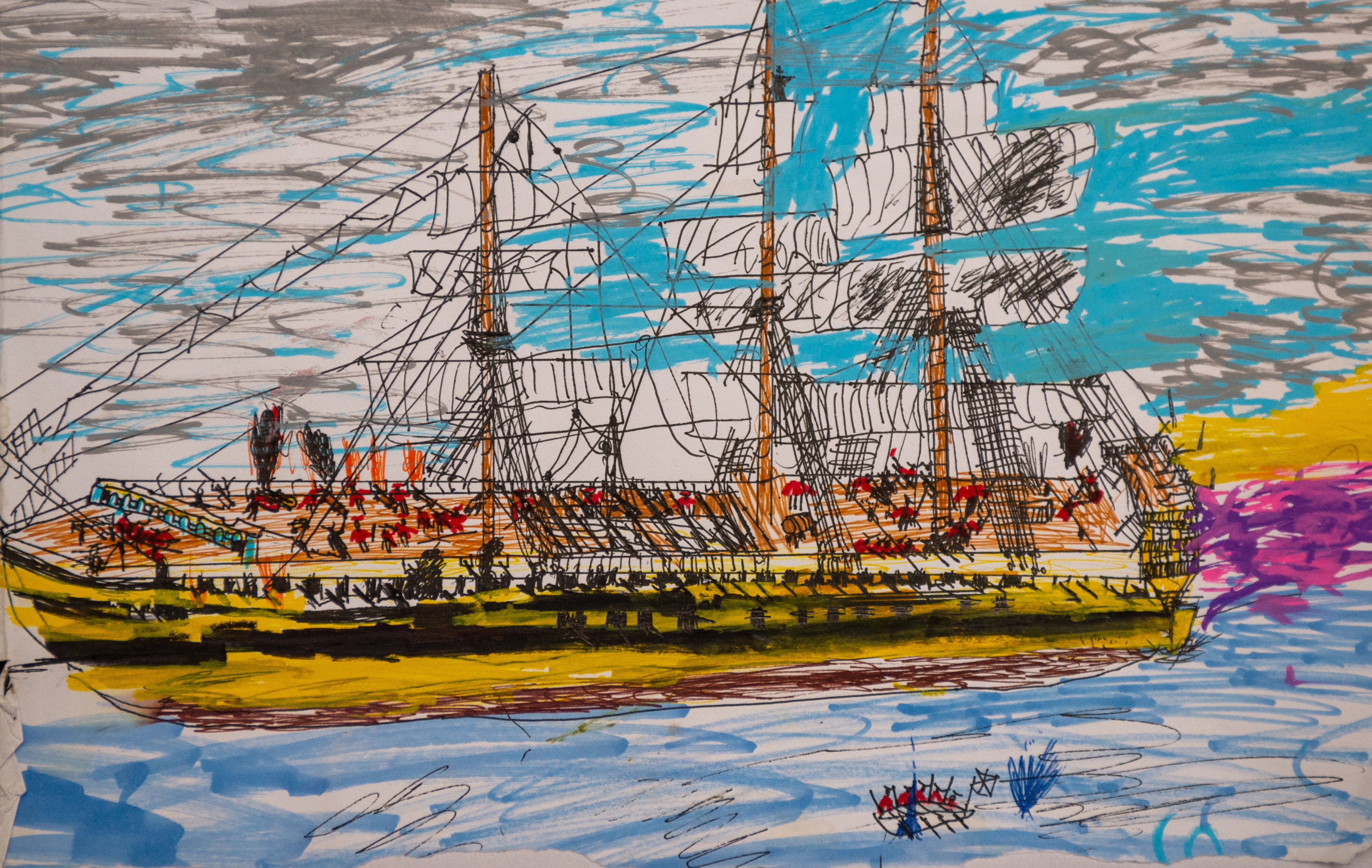 Jonesta said: “The pictures he does of the ships are just phenomenal.

“We have been to museums to look at the different boats and he researched them to check all the details and then he draws them from memory with all the windows and funnels.

“Before he was obsessed with buildings and skylines.

“We’ve been sitting in restaurants before with a view and he will do a drawing at the table within minutes.

“He’s given them to the waiters and they’re just blown away.”

Canon is also a skilled musician and can play a song on the drums after listening to it just once.

He is also a big football fan and plays at Brighton & Hove Albion’s training ground who hold sessions for people with autism.

The widely talented nine-year-old was thrilled when his impressive sketch of a Brighton and Hove Albion match was published in the club’s official programme after grandad John Foregeham took him to watch them play.

The former English actor, best known for playing Frank Laslett in the ITV hit series Footballers Wives and starring in the Italian Job, sat in the stalls with his grandson who drew the entire scene within two minutes.

Canon attends a mainstream school in Brighton and he could qualify for scholarships thanks to his talents.

Jonesta said: “With his incredible skill, we could get him a scholarship into a very good school but we will have to wait and see what Conan wants.

“He loves being in the news and the attention he gets from his friends but his interests can change from one minute to the next.

“Drawing is his main focus at the moment and I am still learning how I can help and motivate him.”

According to the National Autistic Society, approximately one in 100 children on the autistic spectrum in the UK.

Tom Purser, a spokesperson for the charity, said: “Although every autistic child is different, many like Conan can struggle with day-to-day experiences that others take for granted.

“Autistic children can find unexpected changes and unpredictable and noisy environments like the school playground difficult to cope with, so they need more support to help manage their stress and anxiety.

“An activity like art can help an autistic child to focus so that they are not completely overwhelmed by what’s going on around them.

“Being autistic can be challenging at times but we’ve seen again and again how awareness, understanding and the right kind of support can make all the difference.”

Britain’s most expensive BUNGALOW has gone on the market – expected to fetch £4.5 MILLION