This is the heartwarming moment a little girl who has spent her whole life in hospital due to a rare syndrome sat up by herself for the first time.

Gracie Heater, 19 months, lives with Apert syndrome, a genetic disorder that causes a fusion of bones in the skull and spine which can inhibit the brain’s development.

She was diagnosed with the condition, which causes fusion of bones in the hands and arms, when her mum Saskia Hansen, 25, went into premature labour at seven months. 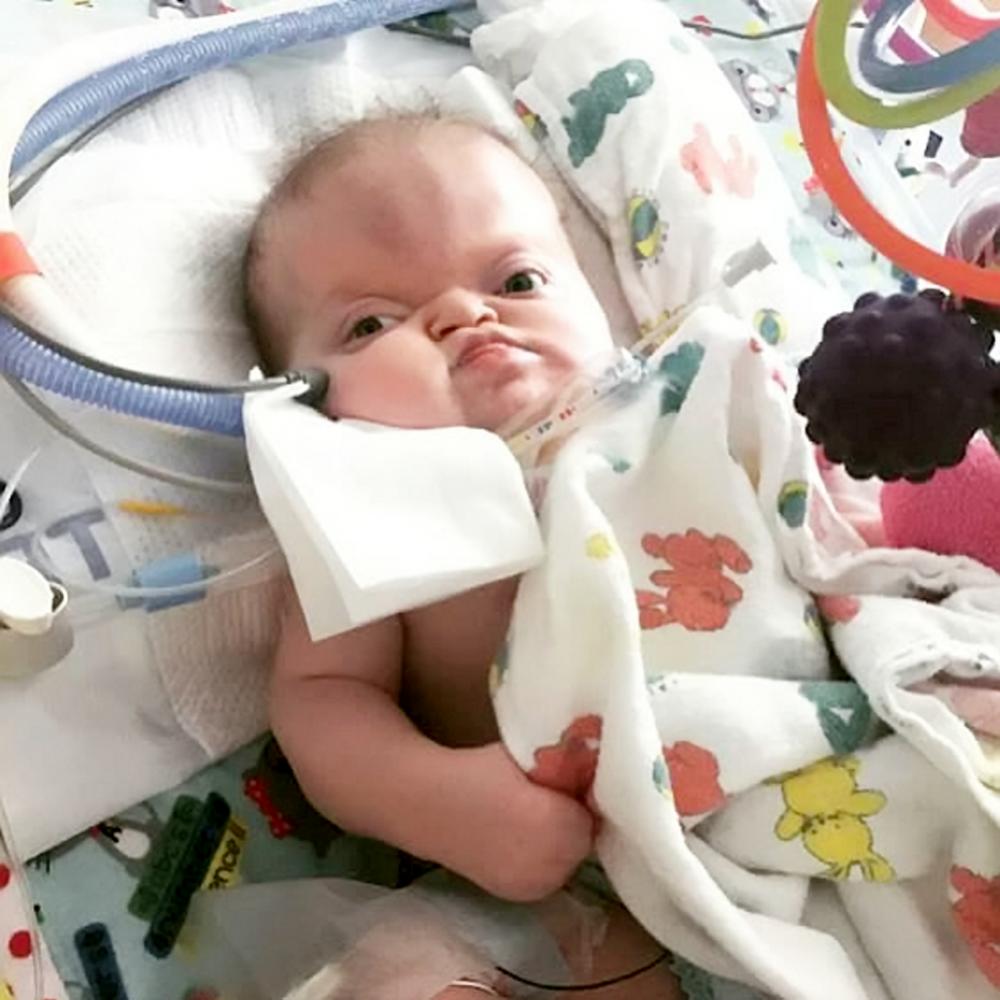 After she was born, Gracie was rushed to the hospital’s NICU, where doctors discovered her respiratory system was also deformed and placed her on a ventilator.

The toddler was born with a twisted trachea and a narrow right bronchi, the passage which connects her lung to her airway.

A month after her birth, Gracie was transferred to Seattle Children’s Hospital, where she has been an inpatient for the past 18 months.

The little girl has survived 12 serious surgeries, including one to separate her fused skull bones to allow her brain to grow.

Gracie’s parents Saskia, a stay-at-home mom, and Rick Heater, 40, a former marine, said their daughter’s determination inspires them every day.

The couple have been celebrating Gracie’s achievements, including the moment she sat up for the first time and when she attempted to stand.

Rick said: “When Gracie has moments like this all you feel is pride because when she was born doctors didn’t give us much hope.

“She’s overcome so many obstacles. Sometimes I well up thinking about everything that she has achieved.”

When Gracie was diagnosed in-utero, her parents said they were overwhelmed when they began researching the condition.

Rick said: “When we first discovered Gracie had Apert’s we spent days upon days researching, pouring over medical journals.

“It was terrifying. The syndrome is so rare that unless you have a child with Apert’s you’re probably never going to know about Apert’s.

“We never felt pity for Gracie. We only ever felt determined for her. We wanted to be the driving force behind her, to make her life as easy as possible.”

In September, Gracie faces her most complicated surgery yet, which will help rectify her twisted trachea which her mom Saskia said will help prolong her life for five years.

Saskia said: “The options were to do nothing and get maybe a year and a half with her because her airway is not big enough to support her or to do this risky surgery and we could get up to five years with her.

“It is hands down the hardest discussion we have ever had and there was a lot of research and uncertainty and chaos.”

Despite everything she’s been through, Gracie’s parents described the toddler as a “ball of life”.

Rick said: “We know that as a family Gracie will probably not live to see her tenth birthday.

“That is a difficult thing to live with but you just turn into parent mode in a way.

“Our favorite moments are the ones where we’ve snuck her out of the hospital just to see the flowers.

“We want her to have these experiences while she still can because we know she won’t be here for very long.

“The little things end up being the most important things.

“Gracie is such a happy child. I have only seen her cry once in 18 months.

“She lights up the room. She’s such a ball of life which makes the realities of her condition even harder.

The parents, who set up Gracie’s House Charity in her honor, dream of one day bringing their daughter home.

“The doctors have hope that she might be able to come home eventually.

“We know her time is short but we would love to be able to give her as many normal life experiences as possible.”