Misdefending the Realm by historian Antony Percy is an eye-opening account of the Soviet Union’s infiltration of the British government during World War Two, and the shocking failing of MI5 in dealing with the threat effectively.

Having thoroughly researched MI5’s activities during the critical era of the Nazi-Soviet Pact (1939 – 41) for a PhD, Percy is arguably the UK’s leading expert on Russian espionage within and without the Security Service during the early War years.

Calling upon a wide range of source material including biographies and memoirs, letters and recently declassified documents, he has woven together the full and untold story of MI5’s incompetence in the face of Communist subversion, and the measures the agency took in the years that followed to cover up their mistakes.

Perhaps the totem for the situation within MI5 during that period is one Walter Krivitsky, a Soviet defector brought to the UK in 1940 after helping uncover a Russian mole within the Foreign Office.

A few years earlier his intelligence, and the unrivalled opportunity he represented for routing Communists within the corridors of power, may have been taken seriously.

But by the start of the war, MI5’s eyes were squarely on the Nazis and the dangers of Communism to national security had, if not completely dismissed, been heavily underestimated.

Thus his time in the UK was largely wasted; he was not pressed for details and the information he did provide was carelessly circulated and quickly fell into the wrong hands.

Spotted by a Soviet agent working undercover in the Home Office, it came to the notice of now-infamous double-agent Guy Burgess. 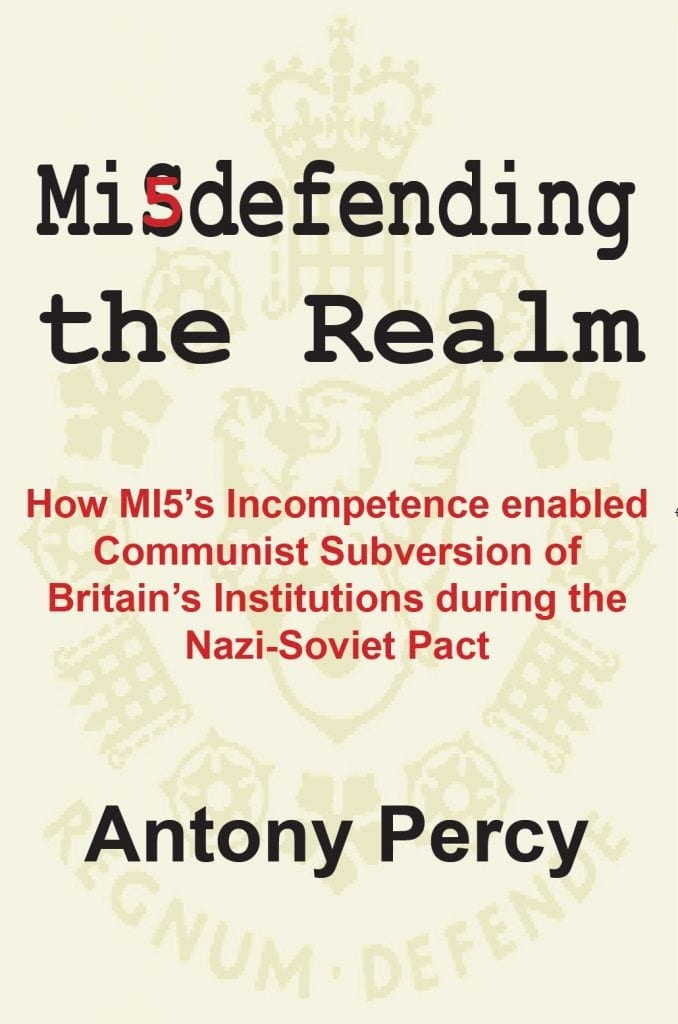 As the book reveals for the first time, Burgess orchestrated a mission to Moscow, ostensibly to inform Stalin – a hoped-for ally against Hitler – that Churchill’s resolve against the Nazi forces remained undiminished.

In fact, as Percy has been able to uncover, Burgess actually intended to tell his Russian masters of Krivitsky so they could act accordingly, and to reassure them that the London spy ring remained active and committed.

The reader may be very surprised to find out that Burgess’s partner in crime for this proposed mission was none other than famed academic Isaiah Berlin. Though he denied it, Berlin was almost certainly aware of Burgess’s plans and motivations. Percy does note that in the public sphere, Berlin’s ardent communist sympathies did much to influence popular opinion to Stalin’s favour, and Churchill’s chagrin.

Krivitsky left the UK and was duly assassinated the following year. Russia, meanwhile, happily continued to place moles within government, tightening its grip further and enjoying a free flow of top-secret information, including atomic secrets.

This is just one prime example of a catalogue of errors that, the author contests, prove that MI5 was professionally incapable of defending itself – and the Realm – from Communist subversion, due to a failure of leadership, haphazard hiring practices, inadequate training, and poor tradecraft.

When its incompetence was exposed after the war, Percy explains how MI5 engaged in a shameful yet comprehensive cover-up of its failures – especially in the vetting of the atom-spy Klaus Fuchs  ̶  in order to preserve its independent existence.

Unlike the official and authorised histories of MI5, the book never glosses over the cracks. Instead, it offers an objective summation of an alarming time, when the nation’s defences had a hole at its centre. It is only to be thanked for that the Russians never seemed to share the secrets they gleaned with Hitler, or history could possibly have gone another way.

An intelligently argued and stylishly-written book replete with a wealth of period-setting illustrations, Misdefending the Realm is a heavyweight examination of its subject that will be appreciated by both casual and serious students of modern history, World War Two and espionage.

Misdefending the Realm: How MI5’s Incompetence Enabled Communist Subversion of Britain’s Institutions During the Nazi-Soviet Pact is out now, published by University of Buckingham Press and priced £20 in softcover. It is available for sale on Amazon UK

The SmartPhone And The New Mobile Casino – A Highly Potent Combination

The SmartPhone And The New Mobile Casino – A Highly Potent Combination