Book Review : Bounty of a Stolen Empire, by Martin Cohen 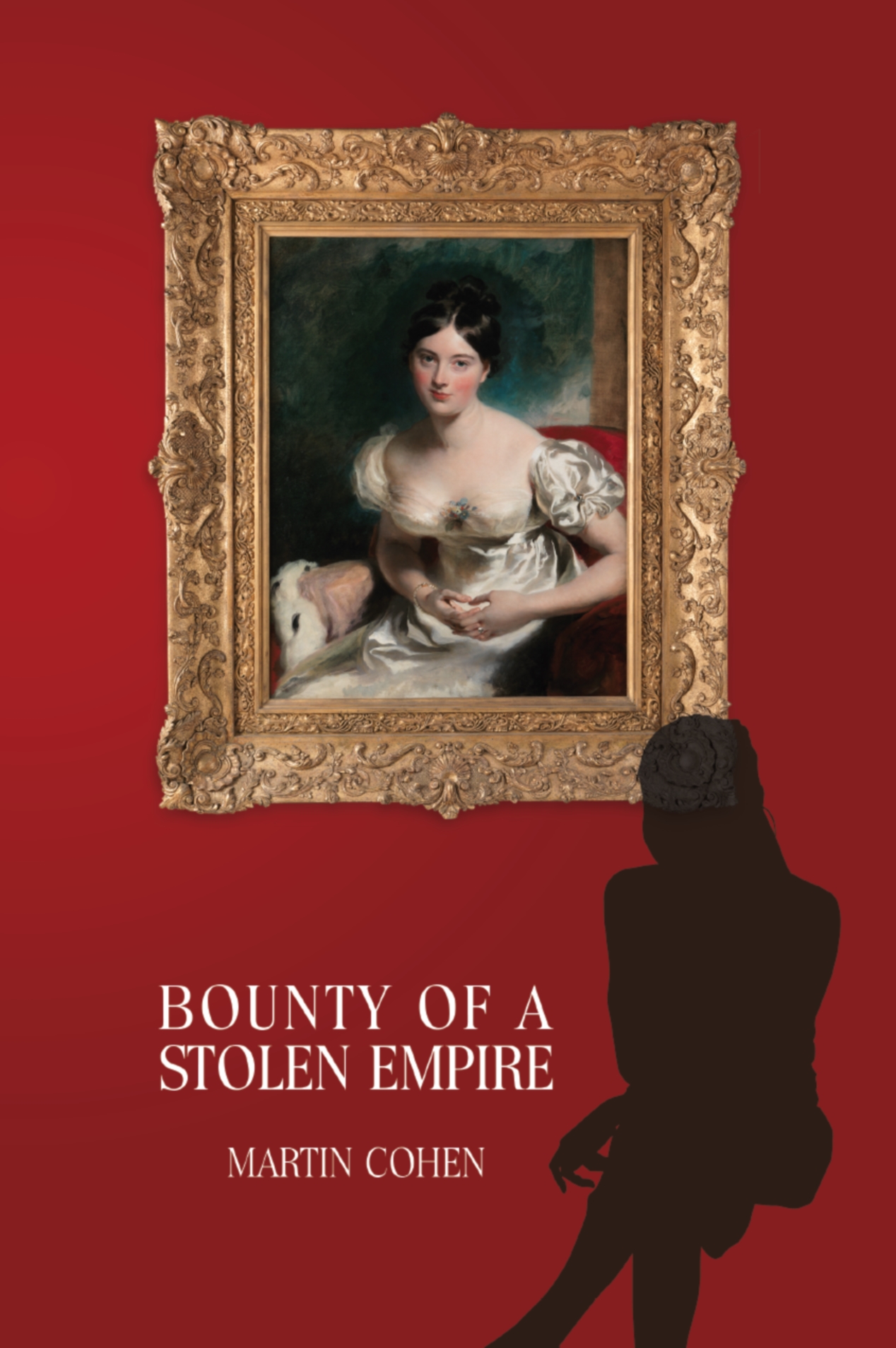 A truly ‘novel’ romantic novel, Bounty of a Stolen Empire is a sharply-written, wryly humorous book that tells the real-life story of Marguerite, Countess of Blessington – one of the most remarkable women of her time but shamefully forgotten by history.

Born Margaret Power in 1789, our heroine, begins her tumultuous life in a chaotic, less-than-salubrious home in an Irish backwater.  As a bored child prodigy she finds herself pregnant and sold by her father in matrimony to a man twice certified insane. The Hon. Captain Maurice St Leger Farmer, discovering her condition, beats his fourteen-year-old bride to within an inch of her life, murdering her unborn child and leaving her permanently sterile.

Yet by performing feats of incredible fortitude and resolve the young Margaret recovers and overcomes horrific adversity, including the sexual prejudices of her time, employing nothing but her strength of personality and natural talents – especially her ability to wrap men around her little finger.

Bounty of a Stolen Empire – the first novel to fictionalise the Countess’s mercurial biography – is as entertaining and colourful as could be desired.

Author Martin Cohen has thoroughly researched his subject and written a vivid and original tribute of which the Countess herself would have been proud.

In the magnificent setting of Hertford House, home to London’s famed Wallace Collection, a strikingly-attired modern woman sits facing the acclaimed portrait of the Countess of Blessington by Sir Thomas Lawrence. She is the Countess herself, risen from the grave to chasten her ill-informed biographers for allowing her name to slip from the annals of history’s superwomen.

She was, after all, once considered the most beautiful and best-read woman in the land, its highest paid author and confidante to the nation’s most famous literary and political figures; Lord Byron, Charles Dickens, Captain Marryat, Peel, Wellington, Disraeli and many others – and an eminence grise who helped change the course of English, Irish, French and Italian history.

Her story, told with liberal acidity punctuated with her own published wisdom, is interrupted by a variety of present-day visitors to the museum. These motley characters pull no punches in their comments on Lawrence’s seductive portrait, while other apparitions include some of the extraordinary men and one woman of her time who influenced her life for good and bad, as well as Lawrence himself.

The Countess tells of her love-hate relationship with her father; the sportsman, drunkard and congenial host, Edmond ‘Beau’ Power, chasing a phantom peerage – consoled only in his old age, when he can boast that all three of his surviving daughters have become countesses.

We learn our heroine’s role in his disastrous adventures as a landowner, businessman, newspaper proprietor, arresting magistrate, and his dramatic trials for libel and murder.

We also discover the truth about the rich and dashing Captain Thomas Jenkins, who falls in love with Margaret and takes her from Ireland to live as his wife at his country pile in Hampshire (the present home of composer Andrew Lloyd Webber). There she spends six years educating herself under the tuition of his mysterious mother and cultivating a new identity as an Englishwoman of fashion.

When all turns sour, Margaret, now Marguerite, is again sold – but not in matrimony, since her legal husband is alive though missing.

The fabulously wealthy, recently widowed Earl of Blessington, bisexual, actor and impresario, pays Jenkins £10,000, (over five million today), for a potential trophy wife, who he marries only after Farmer is brutally murdered in the Fleet Prison.

The story of Marguerite’s eleven-year marriage, based closely on recorded history must be read to be believed. Seven of its years are spent in France and Italy, moving from grand to grander palaces in a ménage á trois – when not á quatre or á cinq – with the beautiful youth, Comte Alfred D’Orsay, another of Blessington’s over-priced purchases.

When the eccentric Earl, with good reason, believes that his wife enjoyed an affair with his friend and once lover, the licentious poet, Lord Byron, he alters his will leaving the bulk of his fortune to D’Orsay provided he marries his infant daughter – which he makes sure he does immediately after her sixteenth birthday – with horrific and hilarious consequences.

Blessington dies suddenly with his finances in chaos. All legacies will be frozen. Scandal abounds, and for all Marguerite’s shrewd business brain and unique literary successes, after a twenty-year rollercoaster ride through international high society involving robbery and blackmail both she and D’Orsay are reduced to the brink of bankruptcy.

The Countess of Blessington died in Paris in 1849, aged 60, and is now, sadly, seldom remembered. But her dramatic story, punctured with tragedy and triumphs, will resonate with a modern audience reared on juicy celebrity ‘tell-alls’. For Marguerite was a woman ahead of her time; an unsung, unbound feminist icon doggedly shaping her destiny in a grossly unequal and unfair society.

Bounty of a Stolen Empire is a droll and delicious Regency romp that relishes in its protagonist’s acerbic wit and sardonic observations as much as its historical detail.

While admitting to poetic liberties, the author largely relies on recorded facts. This is a sound approach, as in Marguerite’s case the truth is unquestionably stranger, and more compelling, than pure fiction.

Bounty of a Stolen Empire by Martin Cohen is out now, priced £11.99 in paperback and £11.39 in Kindle edition. Visit Amazon UK.

How To Get Fit Without Joining A Gym

Why Writers Should Be Using VPNs

Why Writers Should Be Using VPNs