A baby who was born with a full head of hair is now sporting EIGHT INCH long luscious locks which won’t stop growing -at just six-months-old.

Mum Natalie Moore, 33, says she is constantly stopped in the street by stunned passers-by who are amazed by her daughter Katherine Mary Matthews.

The adorable tot has already had to have her flowing dark mane trimmed to keep it in check as it continues to grow at the incredible rate.

She currently sports an eight inch long head of hair which Natalie has to brush and blow dry regularly to maintain its shape and volume .

Babies usually lose their hair around 26-weeks before it comes back again – but Katherine’s has just kept getting longer and longer.

Full time mum-of-three Natalie, from Wordsley, West Mids., said: “When she was born we couldn’t get over how much hair she had – and since then it just hasn’t stopped.

“It’s already quite a handful, she can’t even stand up yet so I have to brush her when she’s on her stomach.

“We’ve trimmed the fringe it and have to wash it every day and it seems to get longer and longer now have to use a hairdryer.

We did measure it from the crown and in some parts it was getting to eight inches.

“I can’t go anywhere without strangers stopped me and saying ‘oh my god, I’ve never seen a child with that much hair’.

“They call her ‘the baby with all the hair’ at the doctor’s surgery.

“I’ve had to keep her hair nice and fresh in the warm weather. She can have the hairdryer on a little bit. It does take some extra time to rinse her hair and dry it.

“I had to trim her fringe a few months ago, but it’s starting to come back again.

“It’s just gone past her neck and past her shoulders now. I don’t feel like I want to cut it off at the moment.

“I would like to see how long we can get it before she’s had enough.

“She is a really well behaved baby and I just know her as my beautiful girl and she’s used to me brushing her now so we’ll see how long we can grow it.”

Natalie says she and her HGV driver boyfriend Anthony Matthews, 31, couldn’t believe it when Katherine was born with a full head of jet black hair.

And it seems to run in the family, as Natalie’s relatives all have long hair.

Natalie added:”When she was born with a full head of hair, a lot of people said that would drop out – but it’s just carried on growing.

“Though her dad has black hair she very similar to me, I could even sit on my hair when I was four.

“I was also born with a full head of her and so was my mum and dad, so it seems to be in the genes.

“Her sister Scarlett is seven and her brother Anthony is two – they also had a bit of hair when they were born but it’s dropped out before it came back. 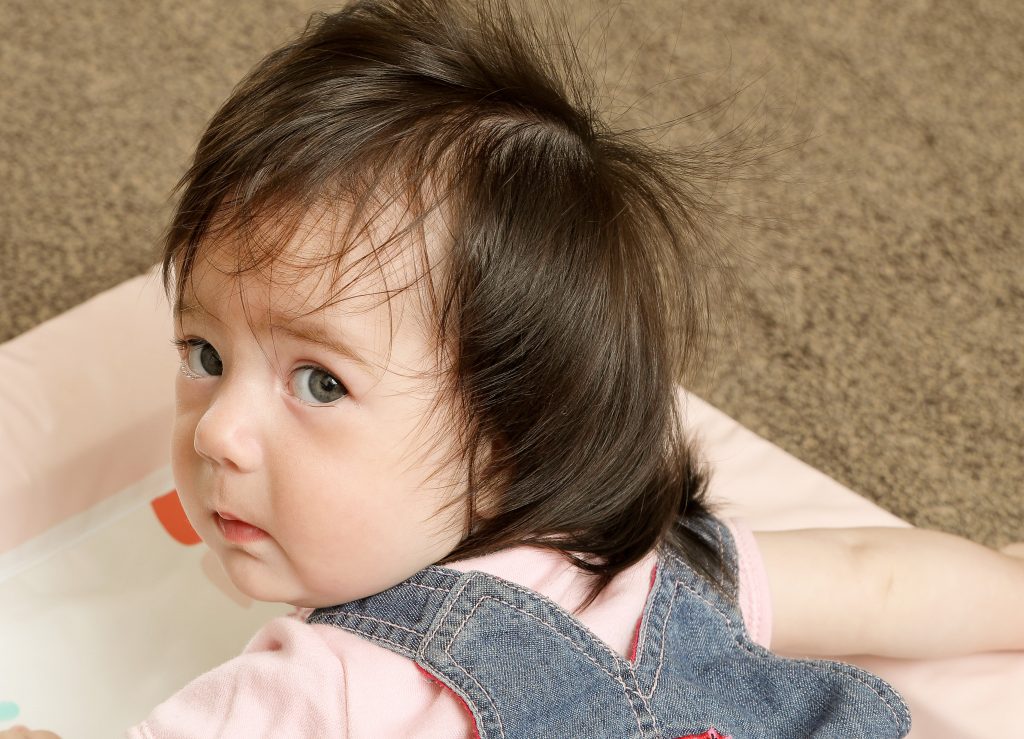 “I also love her blue eyes which she gets from me, and my mum and dad.

“When we take her out someone will always stop us and says ‘oh come and look at the baby’.

“I’m not quite sure where the genes come from, we’ve never done a big family tree but for all I know we are just normal British family.”