Poppy seller .Pete West, 47, who was forced to stand in the rain - after a Wetherspoons pub manager told him he couldn't use the pub's concrete canopy

Pub chain Wetherspoons has apologised after staff forced a poppy seller who was seeking shelter outside one of their pubs – to stand out in the rain.

Pete West, 47, was selling the Royal British Legion’s decorative poppies to passers-by as the heavens opened.

To stay dry, Pete stood under a concrete canopy which forms part of The Chevalier pub in Exeter, Devon.

But the manager of the pub came out and told Pete he wouldn’t be able to stand there as they didn’t have a license.

Several angry pub-goers put down their drinks and left in protest at the decision to move Pete on.

The pub chain has apologised and described the incident as an “error.”

But decorated veteran Pete said he was shocked by their actions.

He said: “The day before I was doing the same thing outside Chevalier and there was no problem.

“Yesterday I was there for around two hours, with no disruption, I didn’t even rattle the tin.

“As I was keeping out of the rain, a guy came out and said ‘you have to move away from the building.’

“He began telling me I was on their property and they were not licenced for me to be there.

“I was not on their bit of the pathway, the black tiled bit on the strip. I was on the public pathway.

“I told him ‘I’m not going to stand in rain chucking it down’, I had my vendors badge on me yet he was telling me ‘you’re not allowed to do collections here.’

“I went away, had a cup of coffee and cooled off.

“When I came back I didn’t want an argument so I went back and stood outside [Bargain Buys] opposite – a lot of people came up and asked me why I had moved.

“I was told a couple of people left the pub because of what happened.”

A military driver by trade, Pete was sporting the medals he earned in the transport core because he: “loves to make an effort, especially this time of year.”

He joined the military in 1991 and served for 21 years in the hellish war zones of Bosnia, Kosovo, and Afghanistan.

He also served in Northern Ireland. 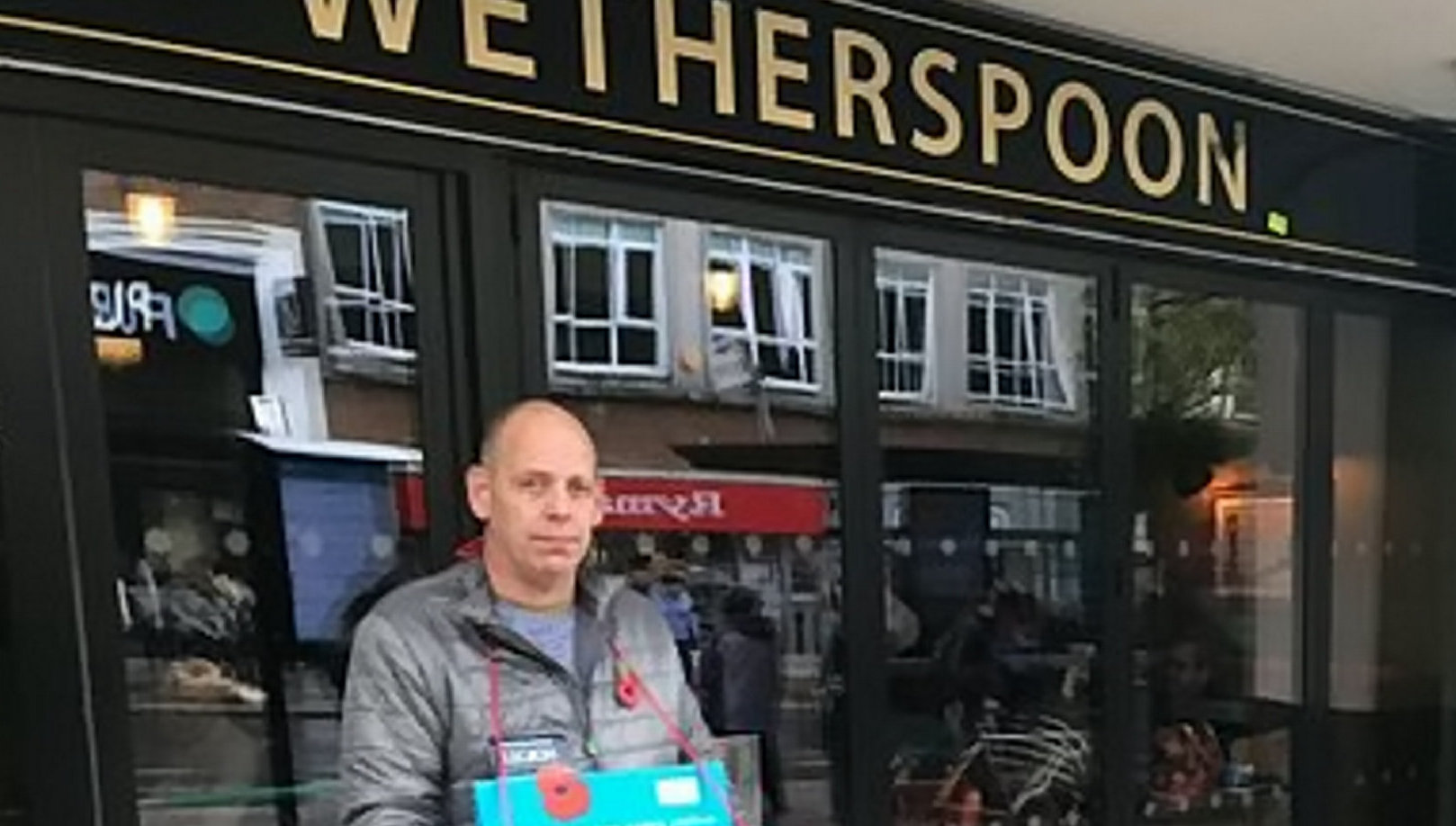 Pete stresses that these were the actions of one manager, and Wetherspoon are normally very accommodating for the selling of poppies.

He said that he went to a different Wetherspoons the day before and was given a free cup of coffee.

He explained: “The day before went into Georges Meeting House and put poppies on counter – and they gave me a cup of coffee and told me I didn’t need to pay for it.”

One fellow volunteer, David Haynes, who helps organise poppy collections in Exeter, says it was an exception to the rule for this to happen in the city.

He said: “This junior manager clearly didn’t get the message passed down from the main manager of the pub.

“Rather than argue it, or get into a confrontation Pete just walked away.

“It is not common at all for things like this to happen. We have no problems with Georges Meeting House at all.

“Ferns in the Guildhall will always offer poppy sellers cups of tea, and other shops too.”

Wetherspoon has been quick to apologise to Pete about yesterday’s incident.

Spokesman Eddie Gershon said: “This was an error and should not have happened.

“We apologise to the gentleman concerned.”