This is the heartwarming video of an adventurous pensioner who took the trip of a lifetime after his wife gave him a “six-week pass” to travel the far east.

Alan Kay took his daughter Ally McDonald, 37, on his six-week adventure around east Asia after finally deciding to retire from working as a surveyor since he was 15.

The 76-year-old finally went to university at the age of 60 to become a chartered surveyor but has always dreamed of travelling.

Alan and Ally set off on a trip of a lifetime visiting Thailand, Cambodia, Vietnam, Hong Kong and Australia in February.

On his 76th birthday, his daughter handed him a video of the trip which she had recorded during their travels.

“Seeing the video Ally created was so beautiful. It was the perfect ending to a special vacation.

“I hope me going on a holiday like this will inspire other young children to travel with their parents because life is too short. You need to enjoy it.”

But Alan, from Annan, Dumfries and Galloway, admitted the trip would have been impossible if his wife didn’t give him a “six-week pass” to travel.

He said: “I never got the opportunity to travel as far as the far east and I always felt like I was always missing something in my life that I always wanted to do.

“My family and I moved into this property 10 years ago and I’ve not stopped trying to transform it into the home my wife, Wendy, 43, wants it to be.

“So as a reward she said to me she would let me go on a six-week trip to the far east just as long as I would come back to finish off building our property.”

He jokingly added: “To be honest I think she wanted to get rid of me for a wee while. And that works both ways.

“My daughter Ally offered to come, I would have loved to take the rest of my kids but I didn’t have enough money to do so.

“When I was living my family behind, I got rather emotional.

“It’s like you have this fear that something bad will happen and you won’t be there to stop it but I’m glad they managed without me.”

The pair visited The Burma Railway or the Death Railway in Bangkok – where 90,000 civilian labourers and more than 12,000 Allied prisoners died during construction.

In Hoi An, Vietnam, Alan took a cookery course and rode a bike for the first time in 25 years.

After visiting Hong Kong, Ally left and went back to Scotland — but not before teaching her dad how to use the expansive underground network.

That night Alan went up to the Ozone Bar – the highest bar in the world – and enjoyed a cocktail.

Alan then travelled alone to Macau, South Coast of China before flying out to Melbourne, Australia. 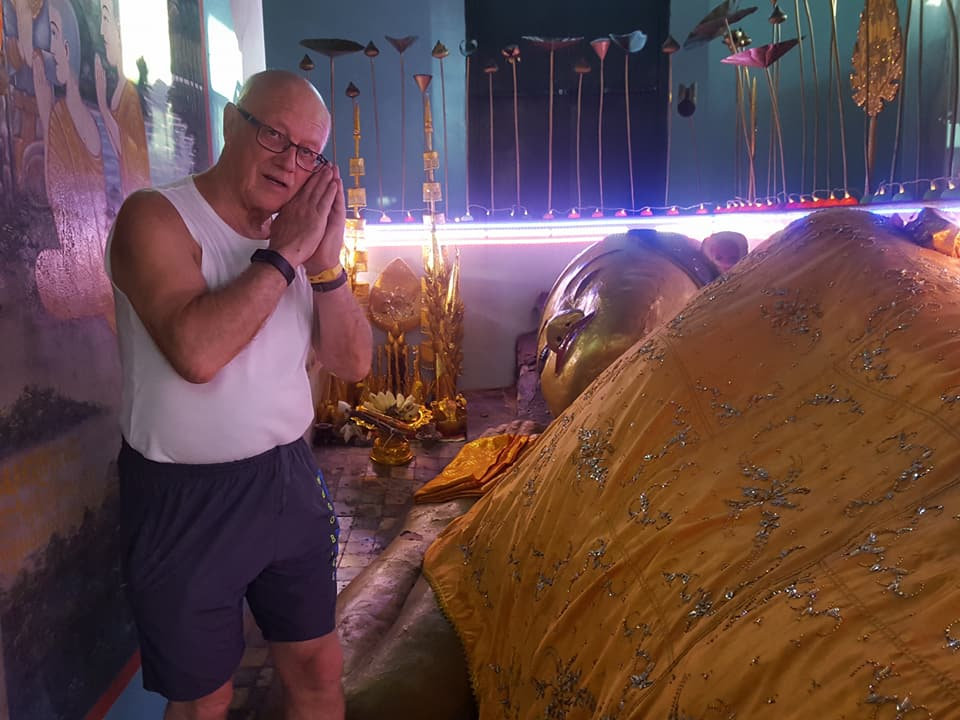 Alan said: “We stayed in Bangkok for four days and it was such an amazing place. I managed to visit the bridge over the River Kwai and I also travelled on the death railway.

“This was such a fascinating experience, definitely one of my favourite sites, as I have always been interested in history and getting to go there with my daughter, was just something special.

“I think my daughter enjoyed it too because she also loves to travel.”

Daughter Ally, a director, said: “I’ve never seen my dad so happy to visit all these destinations. He seemed to love the whole experience.

“He honestly cheered me up, his so funny, my husband must be gutted that I spent all this money on this holiday but I guess it was a trip of a lifetime.

“It’s a once in a lifetime opportunity and I wouldn’t change it for the world.”