An adorable rescue chihuahua with no front legs which was repeatedly rejected because it HOPS around like a kangaroo has finally found a loving home.

Nessie McNubbins, eight, was born with just her back legs and stubs for her front legs due to excessive over-breeding.

The chihuahua was continually returned to rescue shelters before loving owner, Theresa Loyacano, 42, took in the troubled mutt.

Now Nessie happily bounces around her new home which has been filled with special landing pads for her delicate paws, and the pampered pooch is even occasionally carried around in a sling.

Theresa, a manager at an oil and gas company, first encountered the unwanted pooch on social media while she was in mourning for her recently departed dog.

The mom-of-three, from Katy, Texas, USA, said: “My dachshund, Sunday, had just passed away at the age of 18 and I was heartbroken.

“That’s how I came across Nessie – the Texas Chihuahua Centre posted her story to their Facebook page.

“She had been returned to the shelter multiple times because people didn’t want her and I couldn’t bear the thought of her being abandoned like that.

Theresa visited the rescue center in January with her husband Gregory, 45, an audio specialist, and soon fell head-over-heels with the special needs chihuahua.

She said: “We visited her and I fell in love. We had to bring her home with us.”

Theresa added that adopting Nessie has not been without its challenges. She splashed out $500 on a set of wheels to help the chihuahua get around and installed little landing pads all over the home.

The mom of Tyler, 25, Syra, 22, and Valian, 21, said: “Nessie gets around but it’s not graceful. She hops or walks upright and we have bought her some wheels to help her.

“She is eight years old and she lived her entire life hopping so we are still getting her used to the wheels.

“We have little landing pads all over the house because we have hard floors and I don’t want too much stress on her little joints.

“More often than not, we carry her like the princess she is in a little papoose baby sling.”

The adorable pooch was named after the little nubs she has for front legs and her likeness to the famous monster of Loch Ness, Scotland.

Theresa said: “Syra thought that she resembled the top half of the Loch Ness monster – and she was called McNubbins because of her little nubs instead of legs.

“The vet told us she was born without her front legs and it is likely the result of over breeding. She probably came from a puppy mill.”

It took Nessie, who had been continually rejected by previous owners, a while to trust that this home was permanent.

Theresa said: “It took her a little while to settle in with us. She has shown some signs of abuse and she was very timid.

“She is especially shy around my husband but now she is part of the family.

“She has fit right in. We don’t know what we’d do without her at this point.”

Little Nessie attracts stares from strangers when she is out and about as people are curious about just how the two-legged pooch gets around.

Theresa said: “Anytime we go anywhere she gets a lot of stares.

“Typically people are just curious, but when they spend a little bit of time with her, they see that she’s a normal dog, she just gets around a little bit differently.” 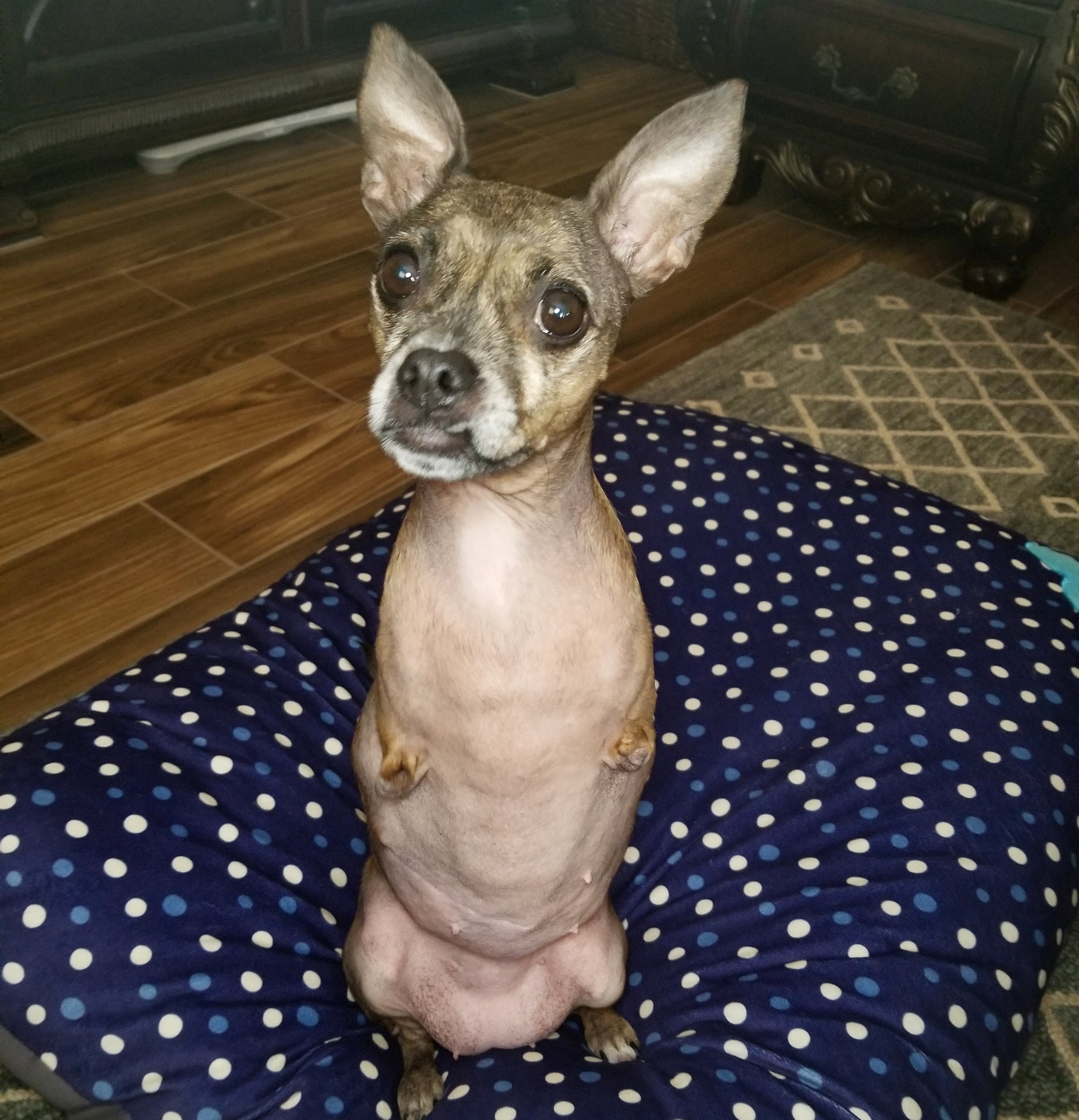 Theresa wanted to raise awareness of the potential of rescue dogs for families looking for a canine companion.

She said: “I don’t want to call Nessie a pet, she’s one of the family.

“I can’t say enough about how loving she is. A lot of people would see a dog like her and overlook her potential.

“I would advise people keep an open mind and know that a special need dog can bring such joy.

“Look for the older ones, the broken ones – they could complete your family.”