Eleven Irish Setters from a litter of fifteen come back together on their first birthday in Galashiels, Scottish Borders.

An adorable litter of puppies has been reunited with its mother for the first time in a year.

Poppy, an Irish Setter, was due to give birth last year to an estimated eight to 10 pups, but owner Lisa Wardle could not believe her eyes when the tiny dogs just kept coming.

Owners of 11 of the 15 dogs have kept in touch and on Saturday they were reunited to celebrate their first birthdays.

Lisa, 40, had planned to give away all of the red-headed pooches but ended up keeping two, while her daughter took claim to another.

The record for the most puppies for a Setter to give birth to is 16. 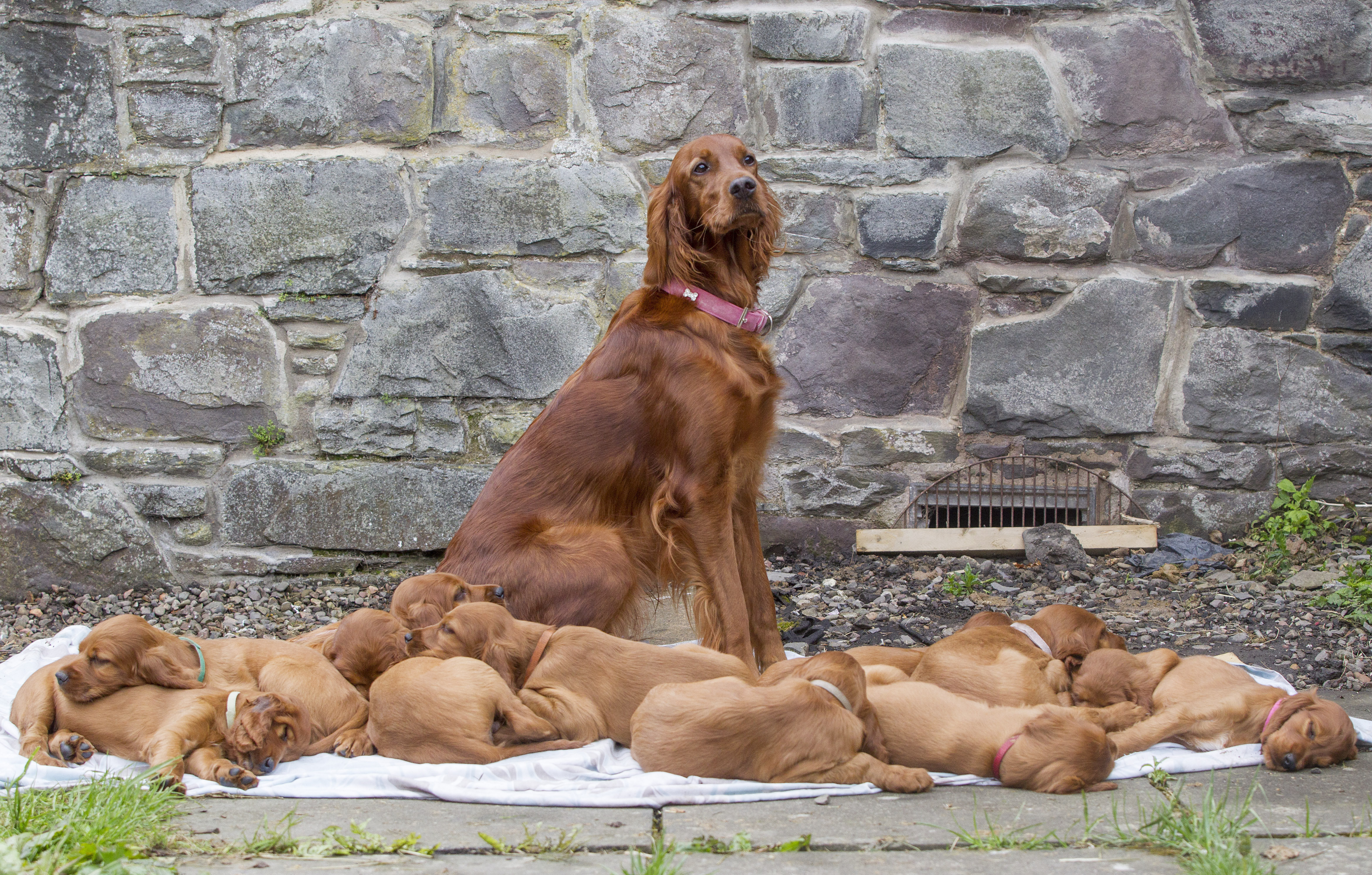 The mum-of-three, from Galashiels, Scotish Borders, said: “We didn’t intend to keep any but we ended up with two.

“We kept Patch, the only one with a white flash on his head, and another boy called Negan – who is named after the Walking Dead character.

“It didn’t work out quite how we planned but I wouldn’t be without them — I would have kept all 15 if I had been allowed.”

Lisa set up Poppy’s famous 15 Redheads – a group on Facebook – so the pups owners could stay in touch.

She said: “We share pictures of them, their antics, and what we have been up to with them.”

Lisa’s family, which includes husband Peter, 51, and sons Ben, 17, and Jack, eight, as well as daughter Abi, 19, described the last year as “crazy”.

As well as looking after their dogs, Lisa and Peter became grandparents after Abi gave birth to daughter Gabriella 10 months ago.

And their granddaughter is not the only new addition to the family in the last year after getting themselves a short-haired grey and white cat called Milo.

Lisa, who works as a carer, said: “The dogs are mad, daft, and full of mischief so the last year has been crazy.

“We just got Milo a few weeks ago, he’s nine months old, and surprisingly they all get along great together.

“We have always had cats and dogs, but when our last cat was killed last April we said we wouldn’t get any more, instead, we would just keep Patch and Negan.

“But ever since then we have been plagued with mice so we decided we had to get another one.”

Lisa said mum Poppy, three, loves having her boys Patch and Negan with her at home.

She said: “For the first couple of weeks she was very protective of Patch and Negan.

“I think because she had such a big litter she didn’t get the chance to play the mum role, so when it was whittled down to the two of them she really became the mum.

“Letty is always happy when she is reunited with her Poppy – they just instantly know when they are all together and get so excited.

“The dogs are brilliant with Gabriella. She has grown up with Letty and they have become best friends.”

But the last year wasn’t all plain sailing for the dogs after Negan was diagnosed with Wobbler Syndrome – a disease of the cervical spine at the neck.

Lisa said: “Poppy bumped to Negan when she was running about quite fast and he started walking like a soldier – slapping his feet down.

“He couldn’t stand or cock his leg and had to lie down when he was eating.

“The vet said he had wobbler syndrome – which is common in big dogs, but for two months he couldn’t be off the lead on walks and was on steroids.

“You feel totally helpless when he was away at the vet overnight because you didn’t know what was happening.”

Negan weighs in at 35kg and is almost 5ft 6inches when standing on his hind legs, while pup Patch is 40kg and about 5ft 2inches on his back legs.

!I want other families to have dogs just like her, that’s why I wanted to do this. She’s beautiful.”

Lisa took time off work to care for Poppy so she could be comforted when giving birth.

Four Reasons Why Bitcoin Is No Flash in The Pan