David Clarkson, 85, an Instagram SENSATION, who posts the healthy meals he eats everyday as he looks to lose weight.

A cheery OAP has become an unlikely internet sensation after posting photos of the healthy meals he is eating as he tries to lose weight.

David Cookson, 85, started posting pictures of his meals online to try and inspire himself and others to slim down.

But just over a month after his first post, the grandfather has gone viral, racking up more than 50,000 followers.

David said: “I can’t believe how many people are interested in knowing what I’m having for my dinner.

“It’s just all go. The number of people following me just keeps going up.

“But it makes me happy and if I can inspire just one person to lose weight as well, that would be brilliant.

“Posting pictures on the internet makes me a bit more serious about the whole thing and is really spurring me on.”

David, who used to own his grocers and off-licence store, weighed 15-and-a-half stone when he set up the account in September.

He never struggled with his weight – until he suffered a heart attack and underwent a double hip replacement in his 70s.

But in just six weeks, he’s already lost 13lb and is feeling confident about getting down to his dream weight of 12-and-a-half stone.

“I used to be very sporty, doing all sorts like five-a-side football,” he said.

“I didn’t need to think about my weight until I suddenly became very inactive and then I started to pile it on.

“I knew I needed to do something about it because I was just getting heavier and getting short of breath when I walked.”

David, from Poulton-le-Fylde, Lancs., joined his local Slimming World group three years ago and managed to lose two stone in a matter of months.

But after losing focus, he piled the pounds back on and after knew he needed to take his weight seriously again.

David’s daughter Bethany suggested he set up an Instagram account and in his first post, in which he’s sitting in an armchair and holding up a book for the camera, he wrote: “I have been a member of Slimming World for a good few years but after initially losing 2 stone, I have since crept back up to my start weight.

“My daughters suggested that I start this account after one of them posted a picture of me on her own Slimming World account which received a lot of likes and positive feedback.

“I think starting this account will give me the encouragement I need to reach my target. Thanks for stopping by!”

David also posts weekly updates about how much weight he’s lost and has been described by his followers as an ‘inspiration’.

He said: “I never realised it would have such an impact. I really enjoy sitting down with my meals and taking a picture and showing everyone what I’m up to.

“My daughter bought me an iPad and it’s become a real interest for me. I like to stay busy as it keeps me young and it’s just something new to try.

“It’s something different and if it’s helping other people too then that’s a bonus.”

David admits that his wife Barbara, 65, cooks most of his meals – but his success has convinced her and their three daughters to also join Slimming World. 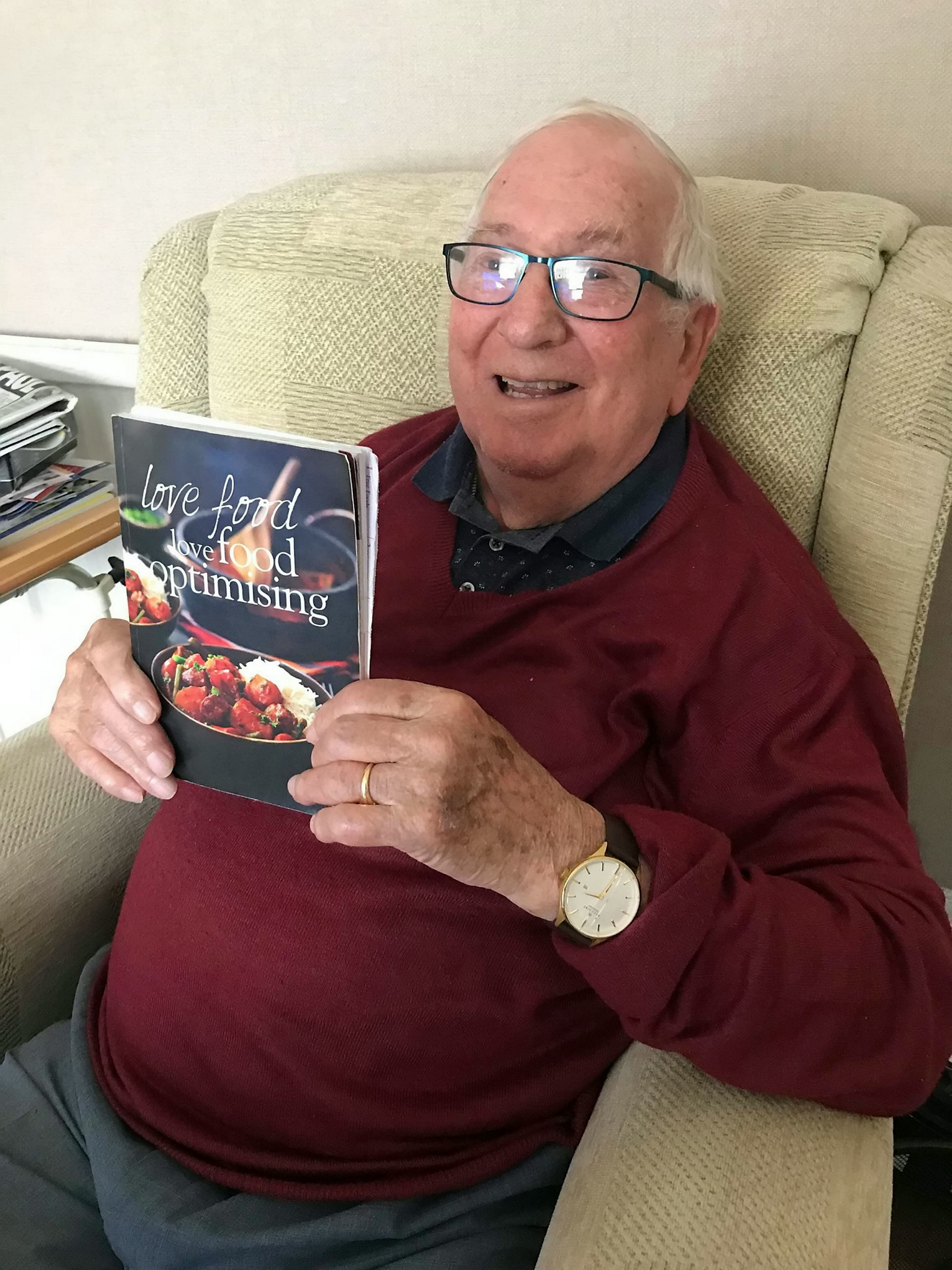 The Slimming World plan works by allowing its users to eat from a whole list of foods which are classed as ‘free’.

They also have allowances for ‘healthy extras’ every day and encourage ‘speed food’ – fruits and vegetables – to get the right amount of nutrients in members’ diets.

Treats are still allowed in moderation and slimmers are given an allowance to stick to each day, called syns.

David, who has 15 grandchildren and four great-grandchildren, said: “I love going to the groups because it really spurs me on. It’s so friendly and you pick up so many ideas.

“I don’t drink or smoke but I do love my chocolate, which is fine, because I can use my syns for those.

“I eat a lot of fruit and vegetables too which really helps with the weight loss and I can still eat proper meals.

“I’m determined to lose two stone by Christmas and then I’d like to drop another stone after that.”

David, who is also a member of his local choir, believes it’s important for the older generation to embrace technology to keep them busy.

“It’s very important to keep busy in any way you can as it keeps you feeling young and it’s all about how you feel inside,” he said.

“I think it goes to show that it doesn’t matter how old you are, you can still learn new things and this has given me something new to focus on.

“And I’m losing weight at the same time, which is even better.”

David was recently crowned Mr Slinky at his Slimming World group in Blackpool, Lancs., after inspiring other members with his weight loss journey.

Taking to Instagram, he added: “”Mr.Sleek 2018! Over the moon to be nominated by the lovely members in my group for this award and to win has made my day!”